Yesterday, we did our weekly ritual of stocking up our refrigerator. We were at Godrej Nature's Basket picking up vegetables when I noticed neatly stacked packets of unusually fat red chilies.
Out of curiosity, I took a closer look and I was pleasantly surprised to see those fat and weird shaped chilies were the Bhut Jolokia chillies. 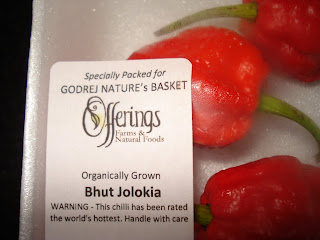 The chili is a native of the North East and is a critical ingredient in Naga cuisine! The Bhut Jolokia are one of the hottest chili peppers available. They had been certified as nearly 401.5 times hotter than Tabasco sauce, by the Guinness Book of World Records! 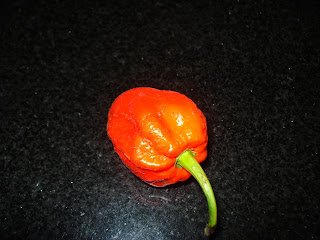 I understand that the "hotness" of chilies is measured on the Scoville scale, i.e. Scoville Heat Units (SHU), which quantifies the concentration of capsaicin in the chili! Capsaicin stimulates the nerve endings in skin and mucous membranes causing a burning sensation.
While capsicums and bell peppers rank in single-digits on the Scoville scale, jalpenos and Tabasco sauce have a rating ranging between 3,500 to 8,000 SHUs. Now, "hotness" is a cultural factor. While Westerners sweat their guts out with jalpenos and Tabasco sauce, they are fairly mild for us!
The Indian standard for "hotness" is defined by Andhra cuisine which is sure to blow anyone's brains! The Guntur chilli which gives Andhra cuisine its distinctive spicy flavor is ranked at 50,000 SHUs! But the for "hotness" of the Bhut Jolokia is at a million SHUs! Now that is incredibly hot indeed!
As my quest for the exotic in food is never ending and insatiable, with a dash of excitement, I picked up the pack.
"What's that?" asked Neeti.
When I told her what was special about it, pat came a disclaimer "Be careful, if you want it! But I am certainly not having it, count me out!"
"Okay" I said with a plain face and I proceeded with the purchase.
The excitement climaxed today morning. Sunday breakfasts are usually egg breakfasts with eggs in various forms - omelettes, sunny-sides up, hard-boileds, scrambled eggs, etc.
Today, my imagination raced at the speed of light when we were deciding on what to have. I concocted the "recipe" of a Bhut Jolokia omelette. But the excitement was a bit mellowed by the thought of a million capsaicin molecules burning and tingling my taste buds. To avoid an "accident" I decided to tone it down, albeit, a bit - a block of finely chopped cheese was added to the beaten eggs - lactose is said to moderate the "hotness"!
Then it was done - the fat Jolokia was thinly chopped and thrown into the beaten eggs, with salt, ground pepper, oregano and cilantro. The mix went into the pan generously smeared with olive oil. In a few moments it was all ready.
The omelette tasted heavenly with toast and ketchup. But "hotness" came in piercing through the sweetness of the ketchup, though it was tolerable to begin with. After all the morsels of the unique omelette were downed, the real effect showed up. The tingling on the tongue intensified, my nose started running and my scalp started sweating profusely. No wonder the Defence Research Development Organisation is developing non-lethal weapons out of the Jolokia.
But the Jolokia really had me! It would be fun to try more of them, and hopefully one day in traditional Naga cuisine!
Posted by Rajeev at 2:55 PM