Twenty - twenty five years back as a kid, I recall flipping through The Illustr 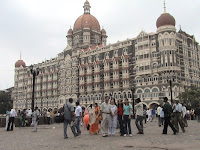 ated Weekly, which carried photo feature on the best hotels of the world. The Taj Mahal was there. Papa who saw me flipping through the photo feature described the grandeur of the place to me, as I listened in wonder....
Today the Taj is in shambles. God knows whats happening inside the Oberoi and the Trident. All this is a sad testimony to the lackadaisical attitude of our authorities.
Bombay, a city that has fascinated me for its speed, attitude and iconic structures, is bleeding for the last 45 odd hours....
Are we so ignorant that we didn't know that this could have happened? The incident has opened a Pandora's box of questions that must be answered for the benefit of Indian citizens.


Can the readers help me with some answers on these random questions on the terror of the last 45 odd hours?

As we wonder about these questions, we need to resolve to flush out and eliminate these cockroaches. We need to remember that our Motherland, India, is indeed incredible and we'ld better keep it that way. Jan Gana Mana....

About three weeks, while channel surfing, I chanced upon the movie "Pinjar" showing on World Movies. The movie Pinjar is about the ordeal of a young Punjabi girl, Puro (Urmila Matondkar), in pre-partition Punjab. And I bet I have never seen a movie that has haunted me, touched me and affected me as much as this one.
Despite being a movie that unsettles the audience, it is a must watch for all those who want to know the ordeals the Punjabis went through during the partition era.
When I spoke to my parents about the movie, they also told me tales about the partition that they had heard as kids and the problems their families faced after they migrated to India. Neeti told me similar stories from her side of the family. And it's not just our families that have stories to tell - almost every Punjabi family has some or the other painful story on the partition.
It is even hard to imagine the hell Punjabis went through in 1947. And after decades of patience, hard work and a never say die attitude, they came out of it as winners. Who could have imagined that the relatively infertile part of Punjab would be turned into India's wheat and bread basket? Or the belt from Amritsar to Delhi would be turned into a belt of unparalleled prosperity?
Our grandparents came here to independent India after losing everything in Pakistan with nothing more to lose but with a will to survive and succeed. And that will prevailed.
So coming to the Punjabi attitude that made it happen - of working hard, playing hard and of living life kingsize. This attitude has been unmatched in the rest of India - the rest of India which was unaffected by miseries of partition.
Often we get to hear of malicious comments on the ostentatious nature of Delhiites (read Punjus), but have we ever got to the bottom of what makes the Punjus of today what they are? Have we ever heard any Punju say that they don't accept any outsider in Punjabi majority areas of the North? Never till date, and never in the future - I can bet my reputation on that. Despite being proud as a community, the Punjabis have always seen themselves as Indians first - look at the contribution of the Punjabi community to the Indian armed forces.
My hypothesis is that all Indians secretly admire the attitude of the Punjus and aspire to be like them. The proof of this lies in Bollywood - almost 90% of all Bollywood movies show a Punju background, bringing out all the giggles from the audiences. Why? Because it sells. Why do these movies sell? Because Indians aspire to have an attitude like the Punjus.... Admit it or not!
But as they say 90% of the iceberg is below the water, this ostentatious Punju attitude is only on the surface. Deep below, there is a warm heart, waiting accept all with open arms and a deep sense of pain for all our Puros, who were left behind and snatched away from our forefathers in Pakistan.
I salute the Punju attitude and would love to be reborn as a Proud Punjabi!!!!!!!

Will Obama rise to the challenge?

Hail Obama! The new president has been elected!
Obama has laid out his priorities very clearly - cleanse America of all its ills.
He has been riding a strong wave of popularity. And popularity brings with it a huge amount of expectations. And when the expectations are the highest, chances of under-performance are the highest, because there is and there always will be a big gap between the perceived expectation and the actual expectation on the street. Will he match the actual expectations and deliver is the big question... This gap is biggest cause of declining popularity of most rulers.
Obama has not had any administrative experience so far. And for being the head of state of any country - be it the United States or the Republic of Vanuatu, prior administrative experience is an absolute plus and a certain desirable. Obama does not have that at all.
And in politics, entrenched affiliations give the necessary leverage to take decisions that may often be unpleasant. Does Obama have that clout? I doubt it...
To make up for his administrative and political deficit, Obama is planning to appoint Hillary Clinton as his Secretary of State. Hillary is a power-person in her own right. Will she ever accept Obama's authority? Won't she be tempted to create a power center of her own, undermining Obama's agenda?
And then measures to alleviate the economic pain may not be too pleasant for US conglomerates, which have entrenched lobbyists at the Capitol Hill. Won't these lobbies undermine his administrative actions?
And we can't ignore the most powerful industry of the United States - the war industry!!! Won't the armanent and defence industry oppose any move out of Iraq. Similarly, energy firms which have landed lucrative oil and gas contracts in Iraqi Kurdistan, will go all out to protect their turf.
Obama may be thinking right. But thinking and talking about the right thing and doing the right thing are two very different matters. And whether he would be able to maintain his popularity and survive as a successful President is the biggest doubt I have.
But for me, I will always miss Bush for his Bushisms and his unflinching support for the Indian nuclear deal. I doubt whether Obama could have pulled it off at all.
Would Mr. Obama perform? Let's answer this question, let's say, in an year's time...
Posted by Rajeev at 10:58 PM 1 comment:

Africa Is Where My Heart Lies...

I can't describe the excitement I felt when I went through the slide show on Lake Malawi on The New York Times Style magazine yesterday. Was reminded of the day when flying down from Lusaka to Bombay that day in March 1987, when I gazed at wonder at the distinctive shape of the northern tip of Lake Malawi from a height of 35,000 feet - it was an awesome sight.
And yes the slide show of on Lake Malawi confirmed what I always thought - Lake Malawi is indeed beautiful.
But its not only Lake Malawi that is beautiful - the entire southern Africa is. I can never forget rolling savanna grasslands with the typical trees, the anthills, the clear waters of the rivers, etc. etc.
And the colourful culture - tribal customs, colourful clothes, soulful music and gleeful faces.
Nothing describes my feeling more truely than "Mama Africa" Miriam Makeba's song "Africa Is Where My Heart Lies..."