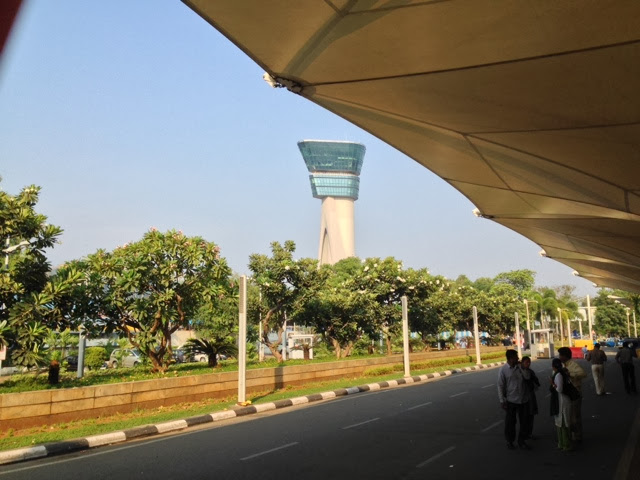 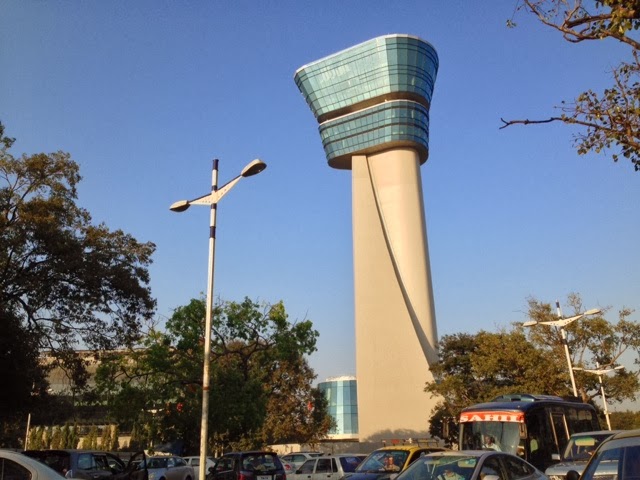 My city, Mumbai, has now got a new iconic structure - the new Air Traffic Control tower at Chhtrapati Shivaji International Airport. Presently, the structure is the tallest ATC tower in the country, standing at 83.8 metres.
The structure is shaped like a wishbone and its distinct shape is an absolute stunner, especially in the evening, when it is illuminated, definitely sexier than a 36-24-36!
I am proud of having this tower in my city, it makes me feel great, amazes me how this city is evolving!!
Posted by Rajeev at 5:14 PM No comments:

Do you ever feel like a plastic bag
Drifting through the wind, wanting to start again?
Do you ever feel, feel so paper thin
Like a house of cards, one blow from caving in?

Do you ever feel already buried deep?
Six feet under screams, but no one seems to hear a thing
Do you know that there's still a chance for you
'Cause there's a spark in you?

You just gotta ignite the light and let it shine
Just own the night like the 4th of July
'Cause baby, you're a firework
Come on, show 'em what you're worth
Make 'em go, oh, oh, oh
As you shoot across the sky...

After my Diwali Wish, I came across this lovely and uplifting video, a video of Air Canada employees at Toronto's Pearson Airport performing on Katy Perry's song, Firework, and somehow, the lyrics struck a chord, instantly!
Enjoy!
Posted by Rajeev at 8:31 PM No comments:

A couple of months back, Neeti visited Pali Village Cafe and came back gushing on the food and the ambience.
Since we were in Bandra last night, Neeti suggested that we go there. And I had to agree. Located in a quintessential East Indian bungalow, the Cafe has a rustic charm to it, with traditional furniture, antique lamps and bare walls! The place gave a Meditteranean "tavern-ous" look.
The fare was artisanal, with rustic breads on display. We ordered our meal and Neeti asked me "Aren't pasta, spaghetti similar to noodles we have in China?"
Indeed that's an exciting question. I replied that perhaps pasta in some form traveled with the legendary Marco Polo from China to medieval Italy.
After devouring our pasta, on the way back, I started Googling the query Neeti had posed.
There is indeed a theory that Ancient Rome did have something like the lasagne that we know of today. However, it were the Arabs, intrepid travelers and traders of the Silk Route that existed ub the Middle Ages who adapted the fresh Oriental noodles, dried them and carried them on their dhows from China to the Middle East and onwards to North Africa and then to South Europe!
The Arabs used to stop by at Serendip (modern Sri Lanka), the Malaccas and the Malabar coast! Perhaps the noodles that originated in China inspired the Malay noodles and string hoppers (idiyappam) of the Malabar coast and modern Sri Lanka before settling in an alien land far away, in Italy!
Some believe that noodles existed in Asia much before Marco Polo’s trip to China. Archaeologists believe that central Asia is most likely the first area to have produced noodles thousands of years ago. From Asia, it traveled westward, perhaps through nomadic Arabs to Europe.
Once it reached the Mediterranean, the pasta / noodle making process was refined, and durum wheat became the ingredient of choice for pasta flour because of its high gluten content and long shelf life. When durum wheat pasta is dried, it lasts indefinitely, making it a very convenient food to store. Over time, because of pasta’s affordability, shelf life, and versatility, it became firmly rooted in Italian culture. The warm Mediterranean climate of Italy is suited to growing fresh vegetables and herbs, which meant that Italians could get creative with a delicious variety of pasta sauces.
Later, Italy became the centre of culinary innovation - tomatoes came in from the New World of the Americas, spinach and aubergines came in from North Africa. These new ingredients along with local delights like basil, olives, capers, cheeses, cured meats and wines resulted in a delectable cuisine that we call Italian!
Is it also possible that the perishable, soft Chinese dumplings had been made since 1700 BC spawned off the concept of stuffed pasta. Today the “dumpling” style of pasta is manifested in ravioli, gnocchi and other preparations using regular wheat flour, eggs and water.
Whether pasta is a part of Marco Polo’s legacy may be questionable, it is indeed true that gastronomical bridges between distant lands and civilisations may have existed for times immemorial, without us, modern people, knowing of them!
And talking of recent gastronomical bridges, I recently read of Sikhs who moved to California to work on farms in the late 1800s and early 1900s, who ended up marrying Mexican women because Californian laws prevented emigration of Sikh women for marriage. These Punjabi men chose Mexican women in marriage for a number of reasons. Physically, Mexican women at the time were thought to resemble Punjabis. They shared a rural way of life. Mexican women were also preferred for one important reason - their tortillas were somewhat like the makki ki roti that the Punjabis so missed in the Californian farmlands! So came about a melange of langars and chicken curry enchiladas!
Gastronomical bridges like these will continue to be built as people travel the world, we have already see that happening over the centuries, but today the pace of inter-cultural intercourse has only accelerated.
That's why one full year after I first wrote two editions of "I Don't Want Nirvana! I Want Great Food, Always!", I still believe in it, even more strongly than I ever did!
Posted by Rajeev at 7:37 PM No comments:

From Mehrauli to St. Andrews, Bandra!

Last year, when we shifted to our new abode, we had some excess stuff that had to be given away. Some stuff was given to our cook and cleaning lady who had served us for quite a few years. Some stuff, like furniture, was donated to an old age home in Andheri East. Our cane sofa set, which my Granny and parents had gifted us way back in January 2004, however had to be sold.
For that, I posted an advertisement on online portals like Quikr as well as on my alumni mail groups.
In a few days, I got a call from a lady who was interested in the sofa and she and her husband came to check out the sofa on the following Saturday.
They instantly liked the sofa and we agreed on the price. They agreed to pick up the sofa the next week and the deal was done.
I thought it was fitting that the money they paid be donated to the old age home, in the memory of loving granny. Neeti concurred with my idea and so it was....
A couple of months later, Neeti moved jobs and it turned out that the buyer - the husband was in the same organisation as Neeti.
Neeti used to keep telling me how her colleague had a keen interest in theatre.
Yesterday Neeti prodded me to join her to watch her colleague's maiden play as a director - Final Solutions, at St. Andrews Auditorium. Grudgingly, I agreed, as I was being pushed out of my weekend slothfulness....
So we headed to Bandra for the play..... And as we seated ourselves right in front of the stage, Neeti noticed something - "That's our sofa!" she exclaimed excitedly!
Yes, indeed, it was.... What a heartwarming feeling...
The direction of the play was was awesome - the couple were fully involved in the production - the lady herself acted in the play.
After the play was over, Neeti and I met the couple and commended their performance. "See your sofa is being put to great use!" the lady said.
Yes indeed. Who would have imagined that the sofa that was bought from Mehrauli in Delhi would make its way to Bandra and would be on-stage, in front of hundreds of people watching an awesome theatrical performance!
At that moment, I could imagine, I could almost see my Granny smiling down from Heaven!
Posted by Rajeev at 10:40 PM 1 comment:

Again the festival season has dawned on us. And this is the time for fresh beginnings, a new start, a rejuvenation of the spirit and the soul.
As we begin our preparations for Diwali I am forced to think about myself, my life. In a sense, I am, kind of, drawing up a balance sheet of what my "assets" are and what my "liabilities" are....
And perhaps, it did not come as a revelation to me...
I knew it all along, yet was timid enough to accept it...
It's such a pity, but little wonder, that all I have been chasing, so far, hasn't been what I really want, not today and never in the past. I have perhaps been living a life that isn't mine, I have been doing stuff because I had to, rather than because I wanted to....
I have perhaps never heard my heart's call, instead, heard my mind's call.
Is that why it's said "We all are f@#ked up with no coordination between heart mind and brain!"
Is that why I lost that spirit, that spunk, that spring in my step?
Perhaps, it's time time to change all that....
This Diwali, I pray to be better "human being" rather than a "human doing" what is dictated..... I pray to dance to my heart's beat, I pray to be myself .... ૐ
Happy Diwali!
Posted by Rajeev at 10:17 PM No comments: