One Evening at Colaba Causeway....

Great cities are melting pots - of people, cultures, cuisines. In this megapolis, Bombay, Colaba Causeway is truly an indicator of what the city had been - a true melting pot!
Proximity to the Sassoon Docks gets Colaba Causeway a good mix of races - whites, Jews, Arabs, Orientals, of varying backgrounds - sailors, tourists, hippies, businessmen, traders and prostitutes.

A lot of these people, are probably in the country for the first time, eager to experience India and what it hasd to offer. That gives enterprising locals a lot of business opportunities - some genuine and some on the seamier side. 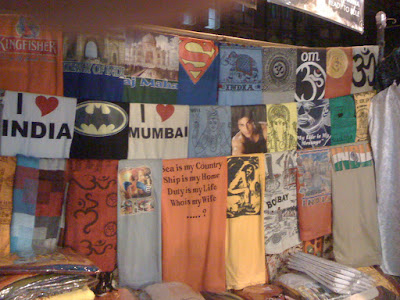 We have cloned "I Love NY" tee-shirts here. "Om" and vedic chants on tee-shirts are other popular themes for the street-side vendors... 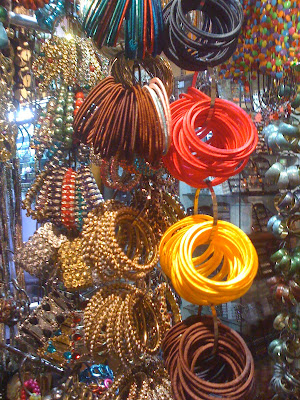 The glitter, the colour, of these bangles bowl the belles over, irrespective of background and ethnicity! 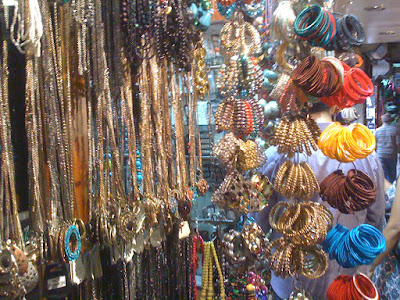 While Neeti was haggling around for her "good" deal on trinkets and faux jewelry, I was trigger happy with her camera phone.... and these ornaments just had to be shot! 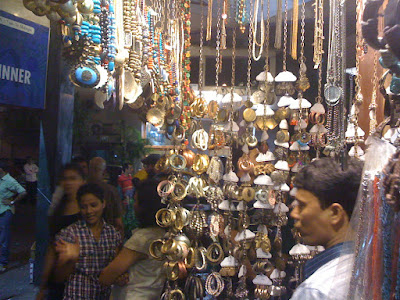 I swear, women, of all ages, can spend hours beating away their blues, with this kind of "retail therapy" 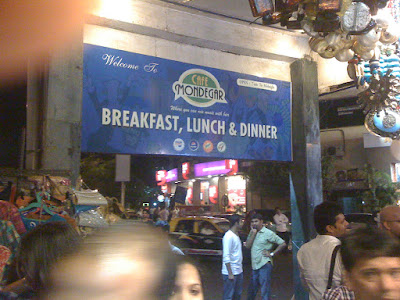 Cafe Mondegar, or Mondys, as we in Bombay, call it, is a landmark of sorts - it tansforms into a smoke-filled cafe by evening, where office-goers and tourists chill with a beer and a bite or two!!!!
Mario Miranda's artwork on the walls, make the place all the more special! The busty Miss Fonseca and Miss Nimbupani remind of the old times!!! 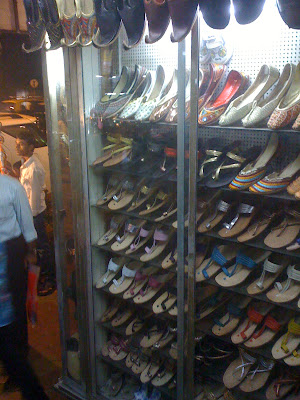 Reminds me of Imelda Marcos!!! 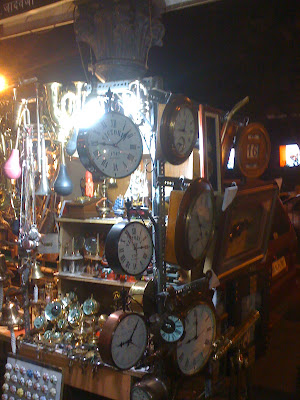 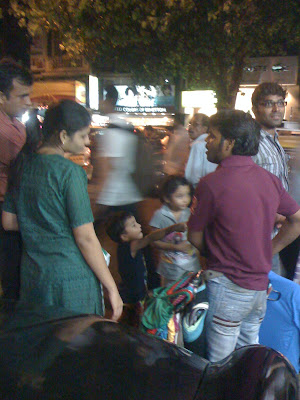 This family managed to finally strike a hard bargain with this vendor - all after an effort of 15 minutes! 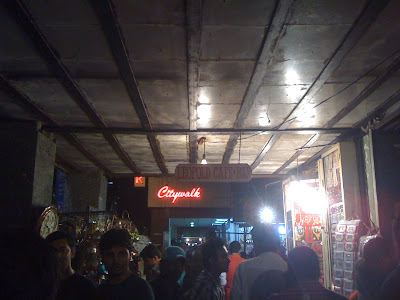 Leopold Cafe - a pretty average but snooty place - its fame courtesy, Lonely Planet!
This where the barbaric Pakistanis struck first on November 26, 2008! 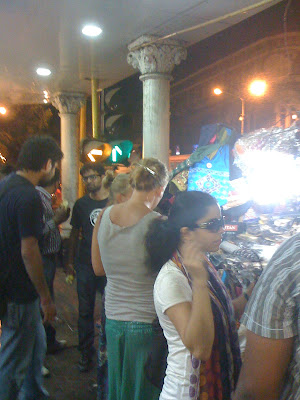 Do I look good in these shades?" 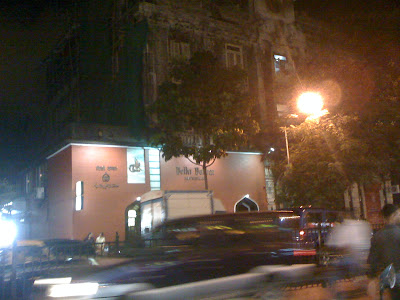 Bombayites are openly scornful of Delhi, but have no qualms crowding up at Delhi Darbar!!! 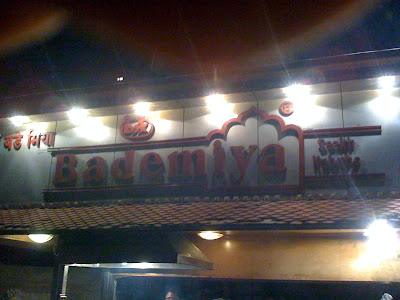 Said to be an iconic institution - that's where I had my first bheja fry! Pretty average, though anything would taste palatable after a 45 minute wait in the aromas wafting in the sea breeze!

Living for Others is the Rule of Nature

I came across this short and sweet post on the internet, which is so very true! I had to share it here. It goes as follows:

Nothing in the "Nature" lives for itself. "Rivers" don't drink their own waters. "Trees" don't eat their own fruits. "Sun" doesn't give heat for itself. "Flowers" don't spread fragrance for themselves.
Moral of the story: "Living for Others is the Rule of Nature."

This is so very true - the world would be a very different place if most of us start thinking this way!
Posted by Rajeev at 2:41 PM No comments:

There are habits, traditions, styles and numerous other cultural aspects that we treasure as being our own, do we know where they really came from?
I just could not help but think about this, when I, recently, re-read about the discovery of the New World, the Americas, way back in 1492.
I wondered what would have our treasured Panjabi food been without corn, or potatoes, or chilli peppers? We are so used to the makki di rotiyan and the sarson daa saag and the aloo de parathey and the rajmah and the bharey hue shimla mirch (capsicum stuffed with spicy mashed potatoes) that living our lives without them would seem unimaginable. How many of us would have realised that the basic ingredients of these rustic Panjabi flavors have their humble origins in the New World.
We call the "time pass" roasted peanuts sold in local trains or in the "roadways" buses our own! Are they really ours?
Can you imagine a masala dosa without the spicy potato filling? Or a vada-pav, sold outside every suburban railway station in Bombay, without the batata-vada and the Portuguese Pão? Or the ubiquitous Indian snack, the samosa, without its filling of mashed potatoes and peas?
The New World gave the world, bounties of potatoes, tomatoes, chilli peppers, peanuts, tapioca, chocolate, vanilla, kidney-beans and pumpkins. We have, over the last 500 or so years, concocted our cuisines around these "adopted" flavours, and we call them our own today.
I would not be biased towards the Americas - the Middle East gave us chick peas - imagine not having chholey bhaturey on the menu? The Chinese gave us tea - would you ever hear shrill cries of "chai-i-chay-ae" on railway platforms and bus termini if we did not adapt to the incoming Chinese imports? And how can you ever think of a South Indian meal without the stimulating bitter-sweet filter coffee? Now that was an adapted taste from Ethiopia, that found its way to South India through the Arabs and then the Europeans - French and British!
But then India gave the world a condiment that was worth fighting wars for - pepper. It is believed, though the thought may seem controversial to some, that the Crusades were fought to secure trade routes to India - the place where pepper originated from. Then, as years went by, the desperation of the Europeans for pepper, led the Spaniards to venture westwards in the quest for spice - they ended up discovering the New World, that ultimately gave all these foods that we relish today! Legend has it that Columbus and his followers to the Americas christened the native American chillies as "peppers" in desperation!
That was all because of India! I thump my chest as I say this!
Our contribution the world goes beyond pepper. We gave the world the aromatic basmati rice, turmeric, and possibly saffron(?).
The role of religion in food cannot be discounted at all. Venison, or deer meat, which was a part of the popular cuisine in ancient Vedic India was taken off the plates by the advent of the Ashokan missionary style of Buddhism. Pork in Indian cuisine suffered a pitiable fate with the barbaric Islamic incursions into northern India. And in purely my opinion, beef was taken off ancient Indian menus, primarily as a religious edict, to conserve nutrition. A milk-giving animal consumed as meat, would be wasteful when compared to the wealth of nutrition that one could get from it - milk, butter, ghee (clarified butter), curd and butter milk! There's no better way to enforce all this than get religion to do it!
Rationally speaking, I guess that is what kosher is all about - not mixing milk and meat products is the rational way in a nutrition-scarce desert. If I am wrong here, I would love to hear from my Jewish friends!
Indian food has evolved into a richer form, never got decimated, with the incoming flavours, over the centuries! The intercourse of food habits and ingredients is not bastardisation of food, as the adaption in India has shown. Certainly McDonaldization is not going to kill our rich culinary traditions. Neither is the Indo-Chinese brand of food popularised by the likes of Mainland China. The interplay will only make our cuisine richer.
And lets not lose sight of what we have to offer the world - we need strategic thought - say a government fund to encourage export of food chains - that would take the biryanis, chicken tikkas, chholey bhaturey, samosas, vada-pav, masala dosas into the world, with Indian brands. (I am told Ugandans have already taken to samosas and chapattis as their own cuisine!)
Adaptation of Indian food around the world would give India immense soft power!
Posted by Rajeev at 12:20 AM No comments: