As we thought we had enough shocks for 2009, another one strikes, though not quite out of the blue.
The Doomsday Scenario is playing out - today, Amritsar is geographically closer to the Taliban than Delhi. Yes, its true, the Taliban are inching closer to the Indian frontier, by taking control of Pakistani territory, inch by inch. And sooner than we expect, we would have to deal with the Taliban. And soon, we will have a new neighbour to deal with, to add to our list of painful neighbours - Talibanistan!
Our options are limited as a country. We are being pushed into a corner - the way Israel has existed for the last 60-odd years.
What do we do? Talk to the Pakistanis? Will it help? No, not at all. When Zardari said he expects Taliban to take control of the country any time soon, it is evident, he controls nothing but his presidential palace. There is no point in talking to him.
What about the Americans? Obama has spoken about eliminating Al-Qaeda, focusing on Af-Pak, etc. etc. But given the economic situation prevailing in the US, it might be tempting for Obama to cut spends by moving forces out of Af-Pak. We can't bank on the US to be on our side, given the poor economics of their presence in Af-Pak.
Our options are limited - we have to deal with this menace ourselves. After taking over Pakistan, the Taliban will turn their eyes on India for sure. And that's real bad. That really would the first real threat that India would face since its independence for the Taliban threatens the Indian way of life, our free speech, our economic independence. And we can't let it happen.
We need to boost our defences all along the Western borders - that is obvious. But more importantly, we have to break the enemy from within. For that, our intelligence has to break in to the Taliban to understand their plans better. Then we would need to deflect their attention from our borders. We should attempt to build resistance within Pakistan against the Taliban. The Baluchis and the Sindhis are certainly are not pleased with the Punjabi-Pashtun nexus and are likely to play ball against the Taliban.
All along I had my reservations on the way successive governments in Delhi had handled Pakistan. But Manmohan Singh's A-team of Chidambaram and Pranab has proven that they have the will not only to talk tough but also act. I hope they have the threat that Talibanistan poses to India in their minds and they act on it.
Posted by Rajeev at 1:20 PM 1 comment:

Now this is keeping me awake at midnight......
When I started this blog, I had resolved that I would be fairly regular in putting in a few words here, but then since the beginning of the year, I have been a silent observer of what's been happening around us all...... Haven't been able to blog much.
It's strange that sometimes random thoughts really flow in a wonderful fashion into something that's worthy of being on this blog for you to read, but at some times these thoughts just don't flow....
I would love to figure out why it happens. Why can't the thoughts come out with a definite regularity is a question that has been bugging me since January.....
Blame it on the weather? Well, I don't think so.....
Or does it really make any sense to think about all this, for creativity just happens, when it has to.
Is impatience really the worst enemy of creativity? (A bit of rambling here - the talk of 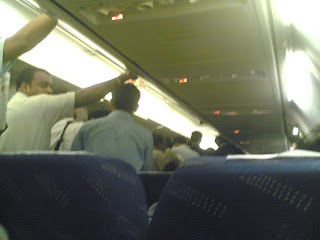 impatience here reminds me of something that we normally see on flights. The moment the aircraft slows down on the taxiway heading towards the parking bay, in the rush to disembark, there is a mad scramble towards the aisle, to open the overhead bins, etc. leading to a royal chaos on the aisle. The result - a remarkably slow movement of passengers out of the aircraft.)
That's what happens in the mind as well. Too many random thoughts clog constructive creative thinking. Impatience certainly kills creativity.
The other day, I was feeling a little frustrated that things were not working out the way I wanted them to and put a status update on my Facebook saying - "Rajeev wonders why we have to wait...."
On this I got a reply from a Facebook connection saying "Patience makes you pay more attention to the details...hence it is so very essential... "
And that's the key to it. Talking of patience, I must mention what I experienced yesterday. A development that I have been associated with, professionally, for the last three years had been giving us all at work, constant nightmares - would it work at all? Is it just a grand dream? Is our money safe?
During the course of the these three years, there had been a number of false starts, quite a few moments of that awful sinking feeling, heated arguments and you name it, it was all there.
But when I was saw the development yesterday, it was beautiful - the creativity of the minds behind the development was evident, like a labour of love, a fine work of art. For me it was like seeing a baby grow. And that's when I said to myself, with time and with patience things will look good.....
And so I shall not worry about my blog. I will be patient and wait ...... But now I will have to go to bed!!!!
Posted by Rajeev at 1:43 AM No comments: