It's 26/11 again.
One year has passed since that gruesome bloody night.
That was a night when I stayed up awake, afraid and sad. That was probably the first time in my adult life that I was actually so scared that I couldn't sleep a wink.
It was a sad spectacle to see CST in blood - if it was CST, it could have been the Churchgate station as well, that I had used only a few hours before the carnage started. Had it been Churchgate and had I left office an hour later, I could have been in the line of fire.
The Marine Drive promenade, was where I used to take my customary walk, post-lunch. That is where the fire was blazing.
It was a scary night, a sad night, with teary eyes begging to weep, but couldn't as all of it was happening so fast for my numbed mind to gather and assimilate.
The eerie silence on the New Link Road, which normally bustles with traffic till 1-2 AM, was a shocker. With rumours of firings taking place at the JW Marriott (which is barely 5 kilometers from home) and a blast in a taxi outside the airport (where I was supposed to be at 6 AM to catch a plane to Hyderabad), I felt I was staring terror in its face and trembling.
And channel after channel blared the news that the top cops of Mumbai Police had been eliminated. The sense of this wave of lawlessness and despair was overwhelming.
And then the images of a crying baby Moshe emerging out of Nariman House and the para dropping of commandos on the building went on to show how anti-Semitism, sadly, had reached our shores, after 2000 years.
The charade that followed on television shows made terror sexier than sex itself. Socialites after socialites, corporate honchos after corporate honchos and hotel hostages after hotel hostages were prodded, provoked by the likes of Barkha Dutt in meaningless debate on security that she can barely comprehend one year later.
The channels sponsored, provoked and initiated inumerable petitions, candle-marches and campaigns for silence till "we, the victims" were heard. The cause degenerated quickly into a page 3 event, with the gathering becoming a grand avenue for celebrity spotting. I don't think "we" were ever heard, but the charade went on ad-nauseam till the TRPs were high, and was soon forgotten thereafter.
The ammunition that our forces fought with, or rather without, became the topic of huge debates. Terms like the MP5s entered our vocabulary - no, I am not talking of an advancement of the MP3 or MP4 audio-visual formats, I am talking of the MP5 rifles.
And in the aftermath of 26/11, Jewish establishments have become strictly off bounds. No longer can I ever visit the Knesset Eliyahu Synagogue at Kala Ghoda that truly mesmerised me, that convinced me that Bombay was truly a melting pot.

Right now I am flying back in to Bombay from Delhi. And this was despite stern warnings from Neeti and everyone at home to be careful, to be on the lookout for anyone, anything suspicious. And as I write this piece, I notice three veiled ladies across the aisle, loudly playing with "cellphones", despite repeated and angry warnings from the stewardesses. These actions were certainly not above suspicion.
And I wondered, could they be carrying weapons? Were they frisked properly?
And it dawns on me that paranoia has come to be a part of our lives, ever since 26/11.
Posted by Rajeev at 11:45 PM No comments:

Our Prime Minister is visiting Washington, and it seems to be a very big deal.
He would be Obama’s first state guest and it’s been made out to be a very big deal.
What is India going to achieve from this visit?
The excitement of the nuclear deal is dead now. The United States is getting ready to deny India 11 out of 15 dual use technologies. There will be pressure on us for signing the CTBT and NPT. (Why should we be shy of signing the NPT? We are overtly nuclear. We are not going to proliferate. Let’s sign. The CTBT is a different question.)
We have been caught sleeping when the Chinese and Obama have carved up the world (or Asia) between themselves. (China has reportedly asked the United States to let it control the Indian Ocean.)
Obama has given a de-facto policeman status to China on the world stage.
He knows the United States cannot live without debt from the Chinese.
Obama wants to get out of Afghanistan at the earliest. Who would fill in the vacuum? Obviously, the Chinese and the Pakistanis would oblige.
Obama has been steadily releasing Guantanamo inmates since he assumed office and has vowed to close the prison by early 2010. It obvious the released detainees will head for the hotspots – Afghanistan, Pakistan and yes, India (don’t be surprised – there had been reports jehadi Uighurs being detained in Kashmir).
All this is very bad news for India. And Obama is turning out to be India’s worst nightmare today – we should award him the Nobel Prize for War, for his actions would destabilize Asia more than we could even imagine, eventually pushing us to the brink of the next world war.
Obviously our external affairs ministry and its diplomats were napping, or were rather excitedly preparing for the pomp and pageantry that goes into a State Dinner at the White House.
It’s high time we saw through all this and had a foreign policy.
Posted by Rajeev at 12:15 AM No comments:

It was almost like a dream come true.
Certainly it was a big deal for a person who is as comfortable with recognizing landings at Runway 27 at Bombay and taking off at Runway 28 at Delhi, just as anyone else would be with, say driving on the Western Express Highway in Bombay or along the Inner Ring Road in Delhi.
Certainly it was a big deal for a person who is extremely pleased to spot a Boeing 747-400 or an Airbus 330, just as one would be pleased to spot a Ferrari or a Jaguar.
Certainly it was a big deal for a person who is extremely passionate about the beauty and splendor of a Boeing 747-400, as if he owns one and is unable to stand any criticism of the Jumbo, just as a car aficionado would get pissed if someone were to doubt the capability and performance of his car.
Certainly it was a very big deal….
I happened to travel on a client’s private jet for work, alongwith a few fellow bankers and client representative.
It was a beautiful little bird, the Dassault Falcon 900EX.
My fellow passengers were excited about the luxury of the aircraft, the plush interiors, the shiny, soft leather seats that were so comfortable and relaxing that they would have put a chronic insomniac into a deep, deep slumber
But my eyes were on the cockpit, those little dials, those small screens were all visible from the cabin. I wanted to pounce on the opportunity to raid the cabin at the earliest.
If you thought I had joined the bearded-turbaned mad gang, you would be disappointed. No I haven’t. I was really excited about the thought of seeing work in action in the cockpit, that thought was certainly driving me mad.
I had visited cockpits of the Hawker Siddeley HS 748, Airbus A300 and McDonnell Douglas DC10, as a kid, but could never really figure out how they flew the bird. This time around, armed with some idea of flying, courtesy the FlightSim, I had a much better idea of what actually actually goes into flying an aircraft.
The crew graciously accepted my request to visit the cockpit and the steward led me in.
The captain handed me a pair of headphones so that he could explain the flight plan, while the co-pilot, a rather young and pretty lady, was in constant touch with the ATC, taki 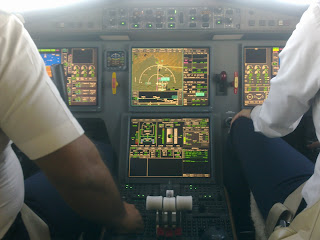 ng instructions on altitude and headings.
The captain explained the functions of various instruments rather enthusiastically, despite knowing that I was a FlightSim regular!
The captain and the co-pilot explained the route that we were to follow into Bombay which was pictorially depicted on the LCD screen. We took a turn east from the Arabian Sea, to fly over the Virar coast, over Thane, took an about turn over Vashi to align with the ILS glide slope on Runway 9!
And now the ATC came into action – every couple of seconds, the ATC would check on the altitude which would be confirmed by the co-pilot and before I knew it, it was touchdown time!!!!
For me, it was a big deal as I had always dreamt of becoming a pilot, as a kid, but could not because of my myopia.
It was a damn big deal for me, one tick off on the “things to do before I die” list!
Posted by Rajeev at 11:17 PM No comments:

Today, a newspaper carried a short story on a little girl in Hyderabad, who claimed to have met the Dalai Lama in her "previous life" and is convinced Tibet will be free by 2012!!!


I wish, I pray, I hope that happens! But, it is a tough going for Tibetans and their supporters.


The Dalai Lama and his people have been living in India for over 50 years, peacefully. Is that why we have forgotten them?


How could we forget that Tibet was a free nation when India gained independence? How can we forget that we have had a deep cultural intercourse with a culturally and politically independent Tibet for centuries?


Can we afford to ignore the gruesome human rights abuses in Tibet that China has been perpetrating for over 60 years. And what about the steady decline of Tibetan population within China-occupied Tibet? Who has spoken about the concerted effort by the Chinese to promote a steady influx of ethnic Hans into Tibet, which threatens the very Tibetan heritage?


How can the Indian establishment be so weak to ignore all this?


We seem to be living in denial.


We supported the anti-Apartheid struggle in South Africa, liberation movements in Rhodesia and Namibia, de-facto independence of the Sahrawi Arab Democratic Republic (Western Sahara) and Palestine. How is Tibet different? All that moral high ground India seemed to adopt is symptomatic of our directionless, opportunistic and reactionary foreign policy.


We, as a nation, suck up to those wielding power, first it was the Soviet Union, then the United States. And it's China now?


No one in our establishment seems to care.


And what about the United States? They are no different. It obvious that they are not interested in this cause because Tibet does not seem to have oil or natural gas. I believe their policy will change overnight, if these resources are discovered in Tibet.


It is a selfish world and Tibet is a forgotten cause that seems to matter little in this world.


Who could have even imagined in 1988 that the Soviet Union would break up by 1991? It happened in 3 years flat.


2012 is only 3 years away and I hope the little girl's oracle comes out true.