The Shenanigans of Our Stars

Every time Kuch Kuch Hota Hai comes on television, I hang my head in despair and I lose complete control of the remote control to Neeti who gets all charged up and I get to hear her say "Ohhhh Shahrukh".
Travel & Living Channel has been showing a series for a while now - Living with a Superstar, on the King, King Khan, where he promises that you can live with him, eat with him and arghhhhh sleep with him? Living with a Superstar has given Neeti a good reason to watch Travel & Living and not cringe at the sight of Anthony Bourdain chewing the creepy crawlies.
She isn't alone in this fanatic fan following. Many of us are.
We spend a hell lot of time following the simian-like shenanigans of our stars, make them larger than life, demi-gods. They rake in the moolah, while we waste our time chasing them.
There are some stars who project themselves as the brainy kinds, take up any cause that comes their way. There is this one star. He supported the Narmada Bachao Andolan and Gujarat riot victims, projecting a socially conscious persona, when it suited the star in question. But he had no qualms in making a joke of a balatkar... Perhaps he should ask a rape-victim how crude the balatkar speech was.
3 Idiots was a different idea, an innovative money making story, good publicity, etc. etc. He surely would have said to himself, what the hell, forget the crudeness of the balatkar speech, let me make the money.
And we Indians, we were swooning over his versatility, comic timing and youthful looks. We watched the movie over and over again, making it the biggest grosser in Bollywood history.
We go crazy over the King Khan and Karan's melodramatic weepy stuff. But couldn't it be possible that all the controversy before the release of My Name is Khan was timed to create a curiosity factor that would pull us, movie-freaks, into cinemas? A friend said that she went to see My Name is Khan in a kind of protest against the political contoversey created. Well, but, she did contribute to what both King Khan and karan wanted.... pull people into multiplexes.
Did the King feel insecure after 3 Idiots broke all records? After all, the King and the lead in 3 Idiots shared an amazing rivalry - remember, the 3 Idiots star once had a pooch named "Shahrukh".
And the First Family always seems to enter into package deals all the time. When Dad signs up, it appears the producer gets the son "free" or vice versa. Many a times, I have scratched my head wondering whether the "free" actor really had a role? Think of what the Big B was doing in Jhoom Barabar Jhoom. But I have to admit that the son has emerged with a least insecure persona in the industry. And that is undoubtedly apreciable.
And these guys are least sensitive to what the country and its people actually need. Karan now seems infatuated with the theme of 9-11. Reports have come in that both Kurbaan and My Name is Khan have been used by jehadi elements in the hinterland to "inspire" youth to come to their fold.
Bottomline - we are a crazy nation. We go ga-ga over all this crap going on, all the shenanigans of our stars and they laugh their way to the bank.
The same holds true for our cricketers. Remember, when you expect, hope and pray that Sachin would steer India to a grand victory, he would get out for a duck. And then instead of practicing these cricketers would be busy shooting for television commercials or chasing skirts. And we as a nation would waste valuable man hours in queues for match tickets, in front of the television or discussing match statistics in office.
Who laughs his way to the bank? The men in blue. Who gets fooled? Us, the country.
Wake up India! It's time we saw through the Shenanigans of our Stars.......
As for me, I am still to make sense out of Kuch Kuch Hota Hai, an effort repeated every 2-3 weeks.....

Posted by Rajeev at 8:19 PM No comments:

Email ThisBlogThis!Share to TwitterShare to FacebookShare to Pinterest
Labels: Films

Greed is Good....
If you think that Gordon Gekko had said that way back in the 1987 movie, Wall Street, well, yes. But the same philosophy has been followed at home by our dear Behenji Mayawati.
The garland made of Rs. 1000 notes has left people speculating how much it was actually worth. A few crores? A few lakhs?
Where did the money come from? Where did it go?
A very "learned" JNU professor on Vikram Chandra's show "The Big Fight" disputed that the garland was made of notes.
Another guest on the show complained that it was the English media which was all out to malign her.
Her shenanigans have inspired a round of raw, pithy satire and poetic creativity on Twitter and Facebook, which was indeed enjoyable.


Whatever....
But was the Rs. 200 crore spent on the rally of the masses worth it?
That money could have been used for, say, setting up a school, a polytechnic, a college, clinic, etc for her so called constituency, the Dalits.
Mayawati has other members in the "Greed is Good" club. Why else would India have the dubious distinction of topping deposits in Swiss bank accounts. I came across two sources on the Net which referred to Swiss Banking Association reports of 2006 and 2008 which talk of deposits from India exceeding US$ 1.5 trillion, now that's an obscenely, astounding Rs. 65,25,000 crore.
This kind of money could not have gone out to Switzerland without political patronage.
Bottomline, all politicians here are greedy, but Mayawati has taken that greed to a new level. She is shouting out that "Greed is Good...."
Posted by Rajeev at 7:36 PM No comments:

A Misty Afternoon at Mulshi.... 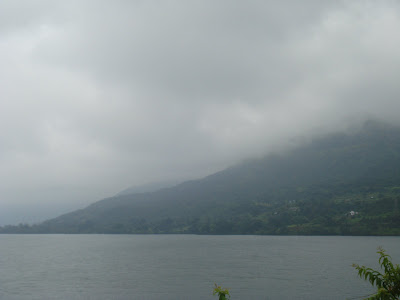 Breathtaking views of the clouds kissing the hills at Mulshi Lake, Pune... 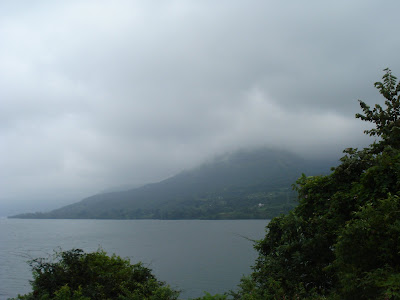 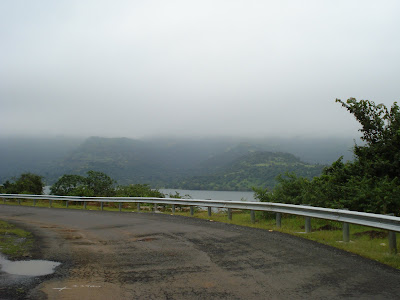 The woods are lovely, dark and deep, but I have miles to go before I sleep.... 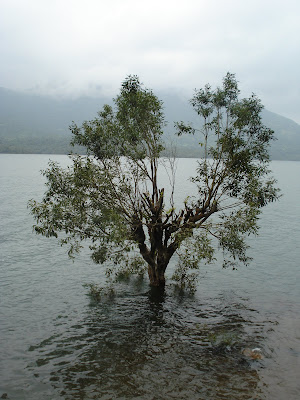 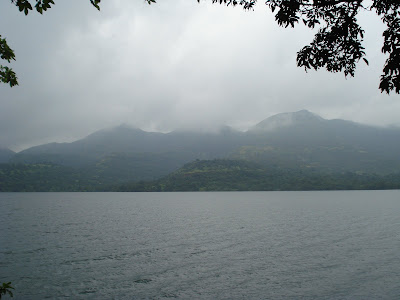 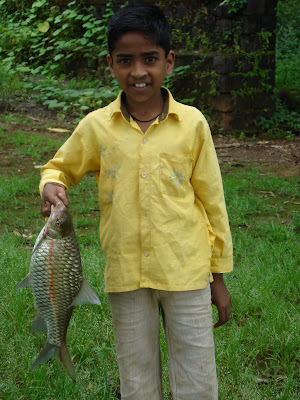 This kid patiently waited for over 30 minutes to hook the fish.... 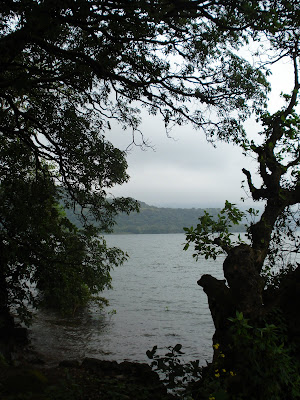 A photo for the postcard... 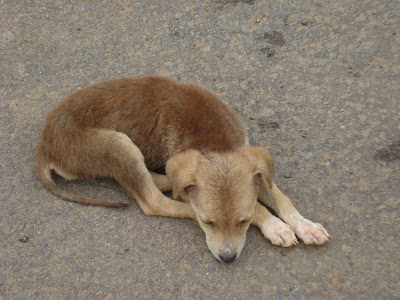 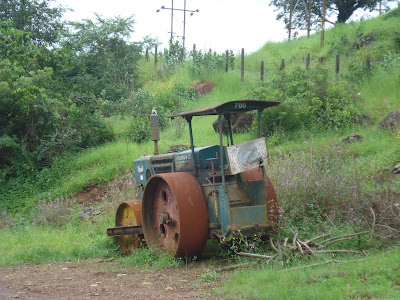 Billed for the Future....

Finally, after a grand Tamasha in Parliament, the Women's Reservation Bill has been passed in the Rajya Sabha.
The big question everyone is asking is whether this is really a big deal or not?
We are not talking of the fuss created by the Yadav trio.
On the way to office today, I heard the very interesting Rajesh Tambe, a guest speaker on Meow 104.8 FM say that the bill will perpetrate dynastic politics. It could result in proxy candidates being put up on the electoral front.
True, all that could be true. It is quite likely all this would happen.
After all, it had happened in the past.
Indira Gandhi was propped up as the "Gungi Gudiya" by power centres in the Congress after Prime Minister Lal Bahadur Shastri passed away in 1966. But 5 years later, after the decisive victory in 1971 war, she was labelled as "Durga", that too in Parliament, by none other than Atal Behari Vajpayee.
I am no fan of the Lalu Prasad Yadav clan, but Rabri Devi did manage to achieve quite a transformation in the three terms that she had as the Chief Minister of Bihar.
Reservation for women is not new. Women have had this privilege for some years now in the village Panchayat elections. And some newspapers say that it has been quite a success, with a cleaner, less corrupt and action oriented style of functioning.
We in the corporate world have seen successful women professionals, though one often hears snide comments and knows "visible" glass ceilings exist.
But the Yadav trio seem to be worse than them....
And what Mr. Tambe said could be true for 5, 10 or 15 years, but surely women lawmakers will catch up with time, like the way they did in the Panchayats.
This could be an epochal moment in our history and our women lawmakers are certainly billed for the future...
Posted by Rajeev at 11:04 PM No comments:

One Question for Mr. Hussain....

What a ruckus has MF Hussain's acceptance of Qatari citizenship created..... !!!!
It is undoubtedly true that we failed to provide to provide him the necessary security. It is also true that while he was hounded by hordes, the lawmakers and intelligentsia had kept quiet. So why the hullabaloo on TV now? For TRPs?
Isn't it true that an artist has a right to express? Ancient Indian artists expressed themselves and created wonder like Khajuraho, Ajanta Ellora, etc.
So has Mr. Hussain.
But freedom has limits, and each individual (artists included) need realise that, before they cross the rubicon.
MF Hussain may have crossed the rubicon ..... I am not sure.
But I only have one question for Mr. Hussain.
Won't the Qataris throw him into the Persian Gulf if he artistically painted local historical or religious figures in a certain light?
Posted by Rajeev at 7:58 PM