I am really appalled how success gets to a company's head, seeps into a company's DNA and corrupts them absolutely.
Over an year back, I had proudly declared on this blog of how I had become a big fan of IndiGo. However, a harrowing experience on Independence Day in 2013 jolted me and proved how fliers aren't independent, rather they are slaves to tyranny and high-handedness of a carrier that calls itself the best in the country....
Since then IndiGo has never been my carrier of choice, I have been at pains to recommend all and sundry I know not or rather never to fly on this carrier. Some of my friends echoed the lousy experiences I had  faced with this brand.
Very recently I had to fly on IndiGo from Varanasi to Mumbai. A dearth of seats on other carriers forced me to book on IndiGo, and all along I was dreading this leg of my journey.
My colleague and I reached Varanasi airport 2 hours prior to departure time and we got into the checkin queue which was fairly long. There were nearly 10 passengers ahead of me, most of whom were Buddhist pilgrims from Sri Lanka, who were probably visiting the Buddhist heritage sites in and around the city.
What pissed me off was the sheer inefficiency of the checkin agent Deepak who took an hour and 15 mins to checkin the group of 10.
Then he got into a verbal duel with two members of the group, apparently he was pestering them on some or the other  pretext - first baggage, then their identity documents and then on their through-checkin beyond Delhi.
The duel virtually got into a fist fight and one Sri Lankan had to scream back "You don't know how to behave?"
I was ashamed. We pride ourselves with having a tradition of attithi devo bhava - अतिथि देवो भवः.
For us, Indians, a guest is like God and yet IndiGo disrespects its guests and in turn to give India a bad name.... What a shame, especially when India is genuinely trying to become tourist friendly!
Finally my turn came. I had already pre-blocked the 3A seat, but this guy insisted on giving me 12A. "Why? I have already prebooked this seat." I was already losing my patience by then.
"You haven't done a web checkin, that's why!" he shot back with an attititude that stank of arrogance.
"So? Doesn't prebooking a specific seat have any sanctity at IndiGo?"
Grudgingly he relented and gave me 3A. I was now completely exasperated by Deepak's attitude, but I was happy I got what I wanted and moved on.
After security check we headed to our gate and in about 20 minutes boarding was announced.
We headed to the boarding gate, both me and my colleagues had carry-on strolleys.
As we reached the aircraft door, I saw Deepak standing at the end of the aerobridge, eyeing my colleague's strolley, which was slightly bigger than mine but nonetheless it was within permissible size limits to be classified as cabin baggage.
"You can't carry this on board" croaked Deepak angrily to my colleague.
I already had enough of crap from this guy. I shot back at him saying this carryon was perfectly sized for the overhead bins and there was no way he could stop us especially when the bins were empty, gesticulating towards the cabin.
Another IndiGo agent, a good soul, who was standing close by came forward and said "No problem, Sir, please proceed!"
Deepak pretended to look the other way.
On my return, I tweeted to IndiGo about this incident and I got the standard spiel from them that they would investigate. (They had promised to investigate about my incident an year back but zilch came out of it, rather I faced a wall of defiance and arrogance.)
Two days back I received a series of calls from a Gurgaon number - 0124-4352500  at 10 am, when I was neck-deep in work. A lady wanted to discuss the matter as though it were a matter of life and death....!
Good lord! These guys at IndiGo have a knack of perfectly being on the wrong side of what is acceptable etiquette! Or perhaps this kind of attitude is "IndiGo Standard Etiquette"!
Never did I hear from them again.... Such is their arrogance! Sometimes I wonder how incident after incident is perfectly acceptable to them, perhaps that is in their corporate DNA right from the very top, their top management. Perhaps their staff is encouraged to behave like this. No wonder, the newspapers frequently have news reports complaining about IndiGo. 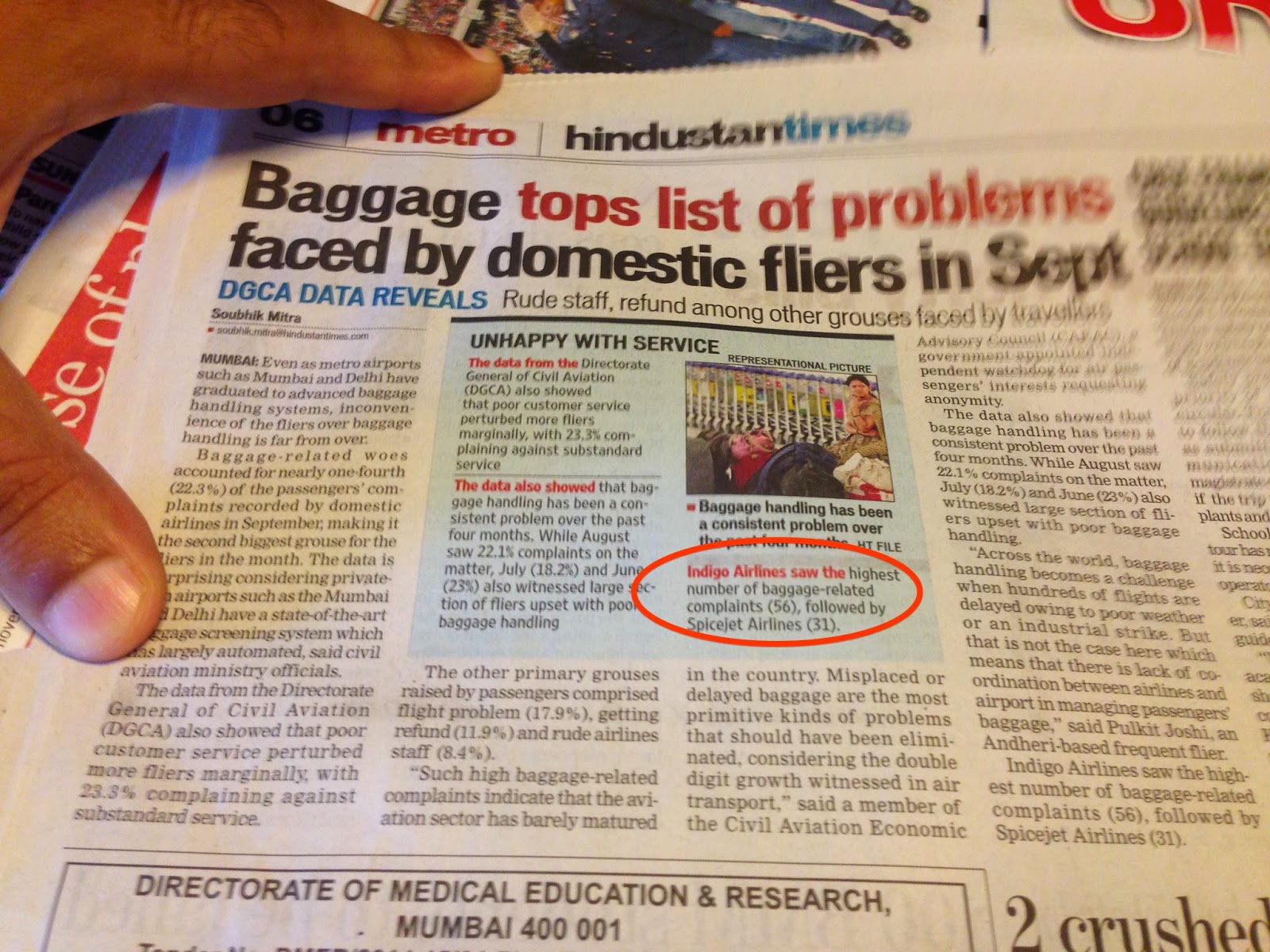 They ought to realise this arrogance is like a termite infestation - will make them hollow from within. And with competition coming in from Air Asia India and Vistara coming in, it's only a matter of time before they face the heat.
As for me, I was indeed a wannabe IndiGo loyalist way back in early 2013, but the incident on August 15, 2013 changed all that and this incident completely reinforced the view that flying IndiGo just isn't worth it, no matter how cheap the fare is, i.e. if it is cheap....
I would never ever, never ever recommend IndiGo to anyone, please spend a thousand or two more on Air India or Jet Airways but travel with dignity, avoid IndiGo like the plague.... (Trust me Air India is much better as a product!)