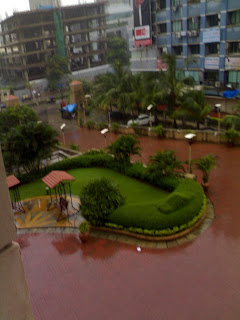 What a day it is..... wow!!! Its been raining here in Bombay since night, or say since yesterday for all practical purposes.
And it looks beautiful outside the window. But the best part is that we don't have to venture out of home, get wet, get water splashed on you on the road, get stuck in a traffic jam on the road, wade through water....
Indeed it seems, the monsoon is the best time to be in Bombay. Everything is so cool, green and full of life. In fact, my better half, Neeti, who happens to be a hardcore Delhiite, did tell me a couple of days back that she had got used to Bombay weather that it would be difficult to adjust to extremes of the north.
But is monsoon all that fun in Bombay if you have to venture out? Perhaps not.... I still remember the grand deluge of "26/7" or July 26, 2005. Spent the whole night in office. The road outside had turned into a river. People were scared. And the next morning when I left for home with colleagues, the devastation was to be seen to be be believed. Loss of life and property has been well spoken about.
Even today, people shudder when they talk of that day - an all pervasive fear. Even continuous rain for two hours is enough to send the city into a spin.
Have we learnt lessons from "26/7"? Perhaps not...
The little said about the administration the better.
What can we do? Eminent citizens like Alque Padamsee go on TV to talk of how the monsoons were in the 1940s. But what have they done beyond that.
Compare this with Delhi - that city changed due to intervention of the courts - PILs filed by eminent citizens forced the city and state administration to shut up, sit up, listen and do. And today Delhi is a much pleasanter place to live in - the quality of life is so far better than Bombay.
So what does the common man like you and me do? Enough of getting saluted for keeping the "Spirit of Mumbai" alsive. Let's cut the crap. Perhaps, we should group together and initiate action ourselves, as collective action is more powerful than individual action.
As for me, Neeti and I just laid to rest a plan of driving down to Fort, for the fear of getting caught up in the mess!
Posted by Rajeev at 9:12 AM

hey rajj...knowing u and yr initiatives with istt, m sure yr stay in bbay is gng to make a difference
:))...enjoy d rains meanwhile :)

Well while u say "rain rain go away", here in Delhi, we do look for a day when we have a good downpour.This year round the Rain God has been merciful and we have seen rains frequently.
There is no doubting the fact that Delhi, as a metro has become the envy of others, and that has to do with the citizens demanding good facilities and also redy to contribute to making Delhi better.
I love being here in this metro.