There's no love greater than the love for food....

Lunching away to glory at Cafe Britannia at Bombay's old quarter of Ballard Estate, that day in August 2006 was when I discovered their signature paper napkins had a rooster on it with a quotation saying "There's no love greater than the love for food".

George Bernard Shaw could not have been more correct than this... Is there anything better than great food? I do not think so. 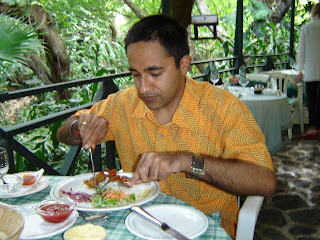 Yet, for every ten people you meet on the street, food is just a normal chore, like having a bath, going to work or answering Nature's call (!!!). These hapless poor souls revel in their mediocrity.

There is nothing more pathetic than the routine of having the same food, day after day, week after week, year after year till the end of one's life. Life is to be enjoyed, food being an important element of it -- do we eat to live or do we live to eat?

I would agree with the latter.

I remember, as a kid, my Mom used to cook chicken and mutton, almost every Sunday. My entry into the kitchen was forbidden as my folks were apprehensive that the sight of blood and gore of uncooked flesh would put me off. However, I used to be fascinated by the smells that used to waft out of the kitchen. And then on the dinner table, I used to be scramble for my best piece, the chicken leg.

But with times, things have taken an exotic turn, much to the "shock" of my parents, sister and now my spouse, Neeti...

As I live to eat, I do tend to veer on the extremes in my quest for epicurean delights that take me into a state of trance ... crocodile fritters, braised rabbit, to name a few. The more sinful the better - could there be anything better than a greasy English breakfast of eggs, fried bacon, sausages, ham, potatoes and baked beans on a lazy Sunday morning? Driven by my excesses, Neeti has now coined an acronym for our weekly grocery list -- HSBC - Ham, Sausage 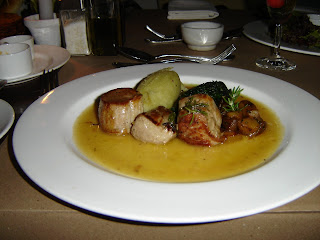 And who can forget the orgasmic pleasures of creepy crawly creatures -- cracking the crab shells, and struggling to gorge on the sweet white crab meats!!! And squids, octopus, mollusks, the list is endless. And what smells better than freshly caught fish? The very sight of this stuff makes my mouth water...
Despite my conviction that anything that walks, creeps or crawls is edible (except humans of course!!), I revel in equal measure or rather am quite demanding for the vegetarian stuff as well. Imagine how a fiery "tadka" can transform the plain looking daal, or how garlic can sizzle up any meal, or how aroma of simmering "maa ki daal" can cause the salivary glands to burst!!!!!
I have always believed that travel gives one an opportunity to explore the local food. Once I travelled to Kerala for a conference, with my colleagues from a previous organisation in Delhi. All along the journey, I was fantasising about famous stews and appams and other Keralite stuff. I was so pissed off when I discovered that the buffet that was laid out had tandoori chicken, paneer tikka, daal makhani, etc. And closer to Bombay, Gujaratis are no different. McDonalds should think of a new innovation -- McThepla for a global launch, which I am sure will be quite profitable!!!!!!! HA HA HA HA
The ultimate foodie I revere is Anthony Bourdain -- this guy is simply amazing. He has no qualms about trying anything, without battling an eyelid. Anything means "anything" here -- from a live beating cobra heart in Vietnam to seal poop in Alaska.
I can only aspire to be like him!!!

P.S. I can never forget the "Oh no, not again" look on Neeti's face when she saw the Cafe Britannia paper napkin
Posted by Rajeev at 11:00 AM

I used to think am a foodie but have never seen a bigger and a more genuine foodie than Rajeev.. he lives, eats, drinks, sleeps, thinks of exotic food all the time..