Thank God it was Saturday!

Sometimes one just wants to escape .... escape from the reality ... freshen up oneself, get out of the routine.
And that's precisely what we did yesterday.... we tried to, for a moment, forget what's coming up and tried to live the day. A week passed by since both of us had been down with a bad flu, a few months had passed by of trying in vain to get what we rightfully deserve .... and what the hell....Saturday was the time to break loose. Well some what!
Again it was one of the days when we missed the gym again, but could there be a better day to binge? I guess not.
After a late breakfast of oat porridge, boiled eggs and poha, we headed out to Inorbit Malad at 1 PM. Gosh - what discipline - breakfast at 1 PM???
The recession is here for sure, so we thought we ought to cut our costs right? So we parked our Dreamliner at Hypercity - the parking coupon is redeemable against purchases at the store - and we walked down to Inorbit, a couple of minutes away.
Got into Shopper's Stop for window-shopping, we could not help exclaiming how fast things have come back to normal after 26/11 - the mall-rats were back, finally!!! But the security was pathetic as ever. While I was frisked reasonably, Neeti went through casually - do we give a damn for security?
To compensate for our inability to visit our gym today, we sauntered up and down Inorbit for about an hour, fairly briskly, burning those calories stored in the flab and then as always, a cuppa was what was needed! So our pace quickened towards Coffee World, where we consumed a few more calories alongwith some refreshing Assam tea - afterall the company was great, to chai ho jaye!!!
While enjoying our tea, we were preparing for the worst - making contingency plans just in case Mr. Kasab's mates walk in with a few crackers - we quickly mapped our escape routes, etc. etc. Fortunately for us, Mr. Kasab's mates probably haven't yet commenced their voyage on the high seas!!!
And then, Halleluiah!!!! It was time to head to my temple - the meat and poultry section of Hypercity, where I have to dutifully pay my obeisance, everytime I am in the vicinity of Malad!!! Picked up some pomfret - thank God, Neeti has finally given in to the joys of a carnivorous existence, after over 3 years of my patient convincing!!!!!
And what recession are we talking of? People are still splurging - filling in trolleys with goodies. Now what's the truth? No doubt inflation has hurt us all. No doubt malls were running empty till about two weeks back. How was today different? Perhaps, people who were sick and tired of being at home after the attacks suddenly loosened up and vented out their feelings 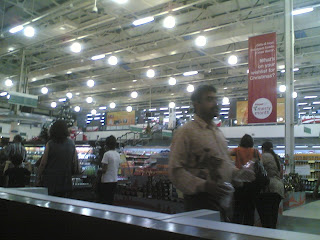 by mall-ratting. Perhaps, people were lulled in by the "comfort" that we've have a great three weeks and no attacks. Sure this would be a great research topic for a psychologist! Whatever it is, we have forgotten all this so soon, far too soon that it pains.
And it was time for another cup of tea, this time at the Brio. My hypothesis has always been to protest against bad service. This time around the service at the Brio was far far better. Neeti has been saying for the last 3-odd years that I always sniff out bad service, like a lion smelling its prey in the air!!!! Whatever it is, we as a country have a long way to go before we learn what good service is - a long subject that's better left to another blog. 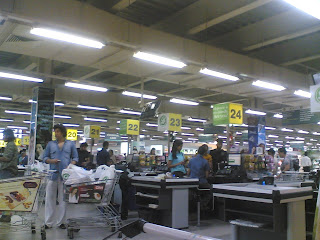 And we headed back - I had a date with my barber for my long due haircut (Gosh! People at office thought I had changed my hairstyle! My style statement was getting blown to smithereens - I needed a haircut, badly!!!).
I joined Neeti at Lokhandwala market, where she was indulging in her favourite pastime of bargaining. On our way out, we chanced upon "Guru da Dhaba" in one of the by-lanes. I had been hearing of this nondescript joint on the foodie forums online for at least 2 years, as one of the most remarkable joints for "homecooked" food. Naturally we were tempted at the thought of rajma-chawal, kadi and arbi. To top it all - the ambiance was just like "home" (read: North India) - an elderly Sardarji - dressed in white with a orange-yellow turban, sat at the counter listening to soothing Gurbani!!! And the food, well, basic but delicious!
And it was time to get back! Thank God it was Saturday!
Posted by Rajeev at 2:49 AM