Earlier this month, Steve Jobs unveiled the second generation iPad, the iPad 2.
I remember when our love affair with Apple started - that was when we bought out our first Apple product - an iPod Shuffle, way back in 2007. When Neeti opened the smart packaging, I recall her squealing with joy and amazement at the new gadget. Imagine 1GB, 260 odd songs, ain't that great!!!
Then, Apple moved into phones with the iPhone 2G. The first iPhone I saw was a 2G that a colleague had bought. The excitement that was generated that morning in office when he walked in with his iPhone 2G is indescribable and was something to be seen and experienced.
Apple turned me and Neeti into gadget freaks. The love affair was officially consummated when iPhone 3G "officially" came to India much later in late 2008 or early 2009.
Living with a telecom and devices aficionado, Neeti, who lives and breathes technology, discussions at our dinner table revolved around 3G, Android, Apple and all that stuff. Apple's iPad naturally found its way into our discussions. And gradually we veered around to the idea of waiting for the then to be released iPad 2 to be launched in India officially. News sites were rife with speculation that the new version would have - 2-way cameras, USB ports, retina display, so on and so forth. And we knew it that iPad 2 was the thing for us. 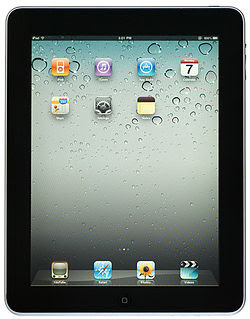 And so waited with bated breaths.
As the unveiling ceremony was on in San Francisco, we logged in, on to CNN's webcast of the event and sat through the entire event.
Wow, what a device!
But there is a certain stubbornness associated with Apple's devices. For instance, none of the Apple devices support Adobe Flash. The iPad 2 still does not have a USB port, as many expected. The battery is not replaceable by the user.
I recall our visit to Croma's store at High Street Phoenix, Lower Parel, where Neeti and I were checking out the first version of the iPad. Quite obviously, a Parsi girl, I would imagine between 10-12, tugged in her mother into the store to check out the device. The girl and her mom moved in next to us and the girl started "experiencing" the iPad like the way a duck would take to the water. Her mom called a store assistant and rattled off a number of questions.
"Isme Tata Photon lagega?"
"No ma'am, you will need a 3G SIM card or a Wi-Fi connection."
"Ohh, can I print files from this 'computer'?" -- as she called the Tab a computer, her daughter turned red with embarrassment and glanced at me slyly hoping I did not hear what her mom said!!!!
"No ma'am, you can't fire a print from here."
"Can I transfer photos from my digital camera directly to this computer?" -- now this freaked out the kid, she was almost in tears on her mom's ignorance.
"No, ma'am, you need a PC to sync data."
I looked at the mom and smiled. She looked at me, smiled and then turned to her daughter "What use is this thing, if we still need a PC?" and looked at me for approval..... That was the ultimate embarrassment for the cute little girl who had expectantly tugged her mom in to Croma to buy her the iPad. I bet, she would have protested by skipping dinner that night.
What impresses me about Apple is the way Steve jobs has inculcated a culture of defining the curve, before "me-too's" are able to get the plot. The secrecy surrounding their products is joked about as being stricter than that of the CIA itself! They know they have their aficionados, who will be there and they will never be disappointed. The news also had reports of people queuing up hours before store opening time to get their Apple first! In fact, one person sold her position at the head of the iPad 2 queue for over USD900 - she smartly recovered the cost of her Apple gadget twice over.
But what baffles me is perhaps Steve Jobs has not really understood the potential of the Indian market. How cheated do Indian Apple fans feel when they officially get the original version of the iPad, just about a month before iPad 2 was launched. So, is Apple dumping unsellable original fist generation iPads in India?
Also Apple chooses to remain silent on dubious employee practices at their manufacturer's end - Foxconn (HonHai), the Chinese contract manufacturer, gained notoriety for labour practices which pushed a lot of their employees to suicide.
Having said that, it is hard not to appreciate Steve Jobs for his spirit to fight back whatever odds come his way. Battling ill health - cancer and liver transplant, he steered Apple to invincible heights. And he came back from his indefinite medical leave to launch the iPad 2. Such is his passion. I can never forget seeing his 2005 commencement address at the Stanford University, where he talks of "finding what you love" and "staying hungry and staying foolish" - questioning the convention. The passionate speech would leave anyone spellbound.

The problem is that such leaders have an aura around them that it does indeed become difficult for the second rung to outshine the spiraling expectations of the environment.
Bu Apple has been a success for being on the cutting edge, defining the market and also for its investors. I recall a quote from the lovable movie, Forrest Gump, where Forrest says "Lieutenant Dan got me invested in some kind of fruit company. So then I got a call from him, saying we don't have to worry about money no more. And I said, that's good! One less thing."
The lesson here for the corporate world is that operational performance has to precede stellar stock performance, as Apple has shown when compared to the performance of US stocks. 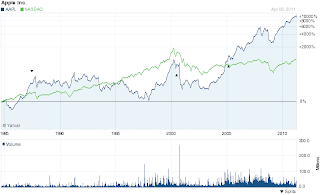