Did Geronimo Have a Cadillac? 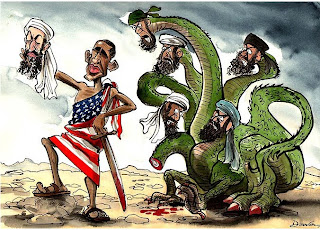 The other day, the world's most wanted man, Osama bin Laden was smoked out from his "rat hole" and hunted down by the US Navy Seals in Abbottabad, Pakistan, in an operation called "Operation Neptune's Spear", "Jackpot" being Osama's code while "Geronimo" was Osama's code in death!
Now that rang a bell - yes, there was a Modern Talking song called Geronimo's Cadillac - a popular song that reminded me of the heady 1980's! But the Geronimo of today's world is not about innocence of the 1980's, not about Cadillacs in any case!
While there is little doubt that the very thought of Osama bin Laden had terrorised the world for a little over than a decade now and he ought to have been brought to justice, Operation Neptune's Spear leads us to ask a number of unanswered questions.

Did the Operation Neptune's Spear really take place or was it another "wagging the dog" incident? That was the first thought that came to my mind when I read about the operation.
Questions on the complicity and competence of the Pakistani Army and the ISI were raised following the incident. I believe this was a grand show put up by both the United States and Pakistan. It is plausible that while the United States had been on the trail of Osama, Pakistan ensured that the "strategic asset" lived on safely, despite his kidney condition, in an army garrison town, with above-par medical facilities, and also ensured the "strategic asset" was fattened and kept ready for the slaughter.
The timing of the operation itself was a big give-away - the United States government barely averted a shutdown as the Grand Old Party and the Democrats clashed over the Budget and Obama's popularity waning.
With elections coming up in 2012, Obama needed to show some action, he needed to prove he was at least as muscular as Dubya Bush.
So, as Obama announced he is to run for the 2012 election, the Seals took off from Jalalabad, the Pakistanis turned off their radars, the Pakistani soldiers in the garrison went off into a deep slumber (or, were they "drugged"?) while the bombing was happening. And finally the Seals flashed the message - Geronimo EKIA.
It suits Pakistanis to feign ignorance now and put up a rant against the United States, while Obama walks with the "dubious claim" of eliminating terror!
Osama was terror, but terror is not Osama alone. So the myth that the world is a safer place now may soon be shattered as al-Qaeda is still not eliminated, it may live on despite Obama's feat, and would threaten the world again to prove that they are a potent force. That does not augur well for the world.
We cannot harbour unrealistic expectations today, rather have to be pragmatic today. India has tried to ride this wave and has demanded action that others on the wanted list be handed over. Pakistan will never mend its ways - you cannot teach an old dog new tricks. There is no incentive for the United States to fight for India. We cannot attack a nuclear adversary, so we go covert - fund and arm the Baluchis and Sindhis, get them to eliminate the Pakistanis on our most wanted list and also to break Pakistan from within.
Now coming back to the Geronimo story - Geronimo was a native Indian leader in the 1800s who opposed American expansionism into Apache lands, got taken as a prisoner of war, his terms of surrender were not honoured and died in 1909. It is ironic that the United States which grew on the back of expansionism and elimination of natives today preaches the world on terror.
Obama (or Geronimo) has gone, but did he have Cadillac? He sure did have a SUV fleet in Abbottabad!
Posted by Rajeev at 9:21 PM