Long back Thai Airways had adopted "Smooth As Silk" as their commercial tagline. Those who know me as an aviation freak would think this post is about Thai Airways. No it isn't! (Sorry to disappoint aviation freaks!)
This post is all about Vidya Balan in her role as Silk in the latest Bollywood blockbuster, The Dirty Picture, which succinctly depicted the life of the southern star, Silk Smitha. 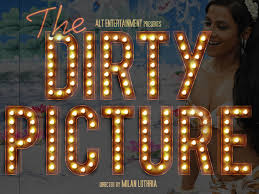 When Vidya made her Bollywood debut in the 2004 hit, Parineeta, I could tell that there was something about her acting that was unique. She got into the character of Lalita making the movie feel real.
Many men were actually smitten by her then. A close friend jovially remarked that she was the ideal "marriage material"!!!! I certainly did not go that far but I too did admire her a lot!
Then came Bhool Bhulaiyaa, which I saw on a DVD when I was travelling to Satara in January 2008. She played the role of a woman, suffering from Dissociative Identity Disorder to perfection! She deserved the Filmfare Best Actress nomination for this movie.
Then the same month, I travelled to Delhi on a Kingfisher flight. She was on the same flight, in the forward first class section. For some reason, after landing she stayed back inside the cabin, presumably waiting for the rest of her retinue, while we all deplaned -that is when I got a glimpse of her. Later at the baggage claim, she waited, fidgeting with her mobile, while her bags were being collected. She looked stylish, pretty and quite slender but was quite conscious of all the attention she, the "Parineeta-wali", was getting - that forced her put on her shades.
She acted in a few movies after that but was majorly panned for her dressing style, after which came Ishiqya, which saw this southern belle getting into the role of crafty, expletive-spewing North Indian widow, who manipulated two horny crooks, played by Naseeruddin Shah and Arshad Warsi to make her ends meet. And "Ch...ium Sulphate" became the essential part of the expletive folklore!
Paa was next, which again proved that she had it in her - the ability to play non-conventional roles with an uncanny finesse. Though I have not seen No One Killed Jessica, I am told she did pack in quite a punch. By any stretch of imagination, the glamdolls and size-zeros of Bollywood could not have done even half of what she had rightfully achieved.
And this week, The Dirty Picture, a biopic on the southern siren, Silk Smitha, opened to rave reviews and record breaking collections. The portrayal of Silk was not only brutally honest to the character but was also replete with the typical 1980s' heaving bosoms and thunder thighs. From a viewer's perspective Vidya performed brilliantly, just as smooth as silk!
And already I can visualise Vidya Balan "Ooh La La-ing" her way to presentation ceremonies at award functions.
Posted by Rajeev at 7:12 PM

undoubtedly, she is an actress of substance..

Any actor should try all different things

you are lucky to see her from a closer distance !!