The crisis which had been brewing in Indian aviation for some time now, has come to what seems to be a climax.
Kingfisher Airlines has reported record accumulated losses and has had to curtail flights to minimise operational losses. Kingfisher did not start off this way. The airline was a breath of fresh air in Indian aviation.
The day Kingfisher was launched, I happened to be at CSI Airport's Terminal 2B in May 2005. The Air-India hanger next to the terminal was the venue for the launch party. The new Airbus A320, with its Kingfisher emblazoned red tail, was looking smart.
Then, a few months later, in August 2005, Neeti was the first, in our family, to travel on the new airline on the Delhi-Bangalore-Delhi sector. She kept raving about the service and the IFE, in-flight entertainment, a first in Indian aviation. She was not wrong.
I took my first Kingfisher flight on the Bombay-Delhi-Bombay sector in October 2005 and I too was blown over. The aircraft were new Airbus A320s, clean, spic and span and smelt fresh. The decor was warm, very much unlike Air-India or Jet Airways.
Despite the titillation onboard, suggestively skirted flight attendants, the launch of the airline was an epochal event in Indian aviation. Service was good, food was great, the IFE was a first - no I am not referring the red-skirted two-legged kind of IFE, but the in-flight entertainment programmes. They pioneered the concept of web check ins and seat selection. I dumped Air-India Flying Returns frequent flier membership and took to joining King Club with gusto.
In all, Kingfisher was a breath of fresh air. They forced Jet Airways, which by then had become quite a haughty brand, with staff having an arrogant and "holier than thou attitude", to change.
The credit for this went to Mr. Vijay Mallya, who claimed we, the passengers on board, were like guests in his home. I truly did feel so, felt like a king on board.
But Mr. Mallya wanted to grow, grow fast and target profitable international routes. To get to fly abroad, he acquired Air Deccan (which was about to complete the required 5 years before international operations could commence).
The airline announced orders for a number of widebodies - A330s, A340s, A350s and A380s. It was widely believed that Mr. Mallya wanted to fly the A340s non-stop between the world's greatest Silicon Valleys - Bangalore and San Francisco. That made a lot of sense.
By the global credit crisis struck. The already loss-making Air Deccan lived on as the low cost variant of the airline. That certainly come naturally to Mr. Mallya and Kingfisher, which by then was known for its flamboyance.
Payments for the widebodies became due. The airline took deliveries of the A330s, five in all, and launched them on select international routes - London and Hong Kong only, while the other international destinations were served by the A320 family. 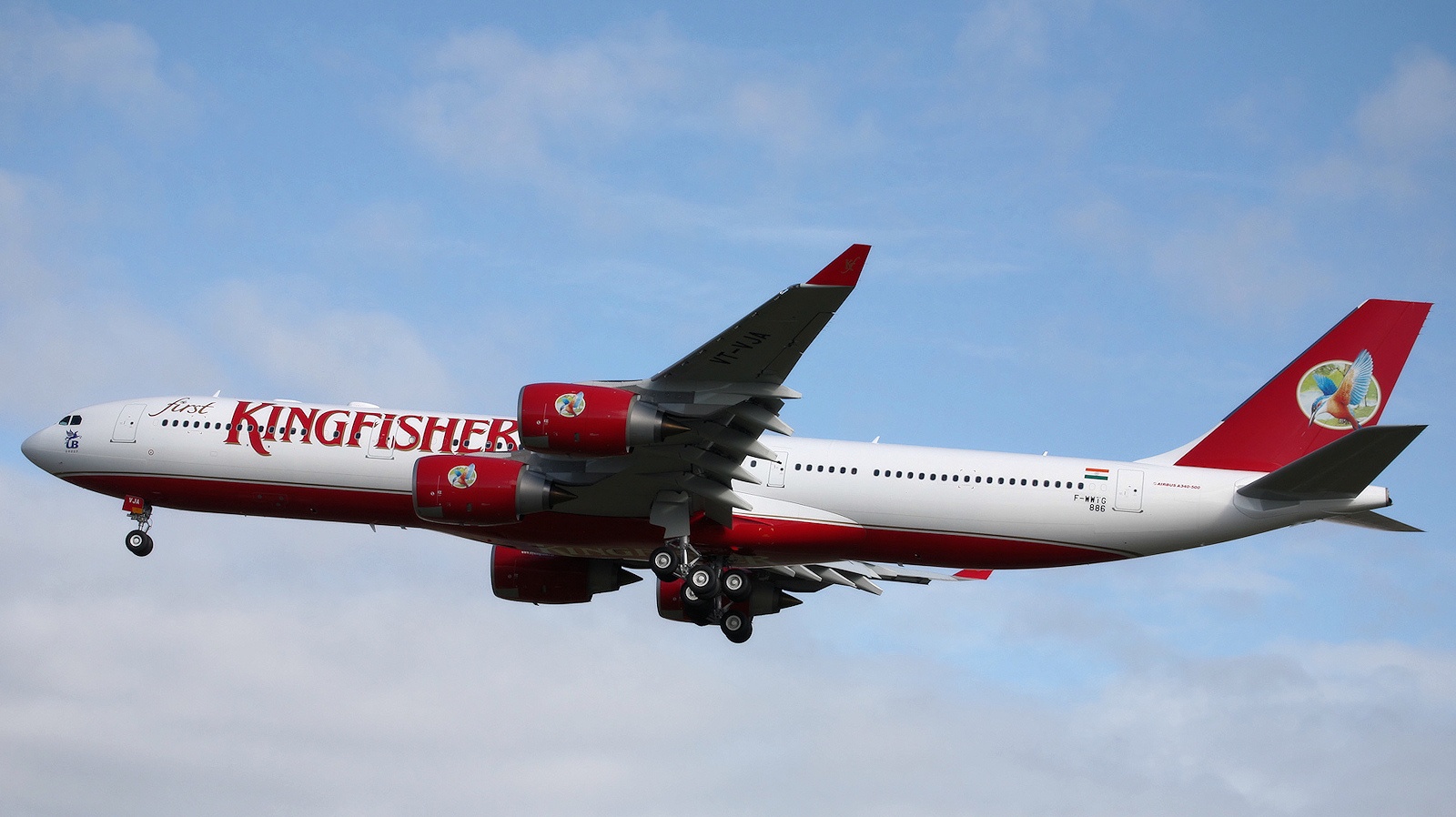 While the A340s were ready at the Airbus facilities at Toulouse and had already been painted in Kingfisher colours, Kingfisher was forced to cancel the order, and these aircraft went to Arik Air of Nigeria. The dreams of Kingfisher flying non-stop to San Francisco went straight into the trash can.

An aviation blog Bangaloreaviation.com says: "Clearly, Arik saw a good thing in the tremendous effort put in by Dr. Mallya and the team at Kingfisher, in designing the interior of their A340-500, and plans to use the same aircraft configuration, for long-haul services to London, New York and Houston."
After the Air Deccan acquisition and the credit crisis, Kingfisher service deteriorated prompting me to shift loyalties to Jet Airways. But when I recently traveled on Kingfisher on the Bombay-Hyderabad sector, I was shocked to discover that they don't serve butter anymore with breakfast. That spoke of the impending disaster.
But today, the airline which dreamt of new horizons and forced arrogant incumbents, like Jet Airways, to change is on the verge of a saddening closure.
It is even more painful to see Twitterati joking about the impending collapse. Truly speaking, had Mr. Mallya succeeded, he would have been feted as an avatar of the legendary JRD Tata. But the sad fact of this world is that success is a bastard, and no one loves people who failed.
It has to be emphasised that the role the government has played has left a lot to be desired. They need to recognise that a healthy vibrant aviation sector is essential for a growing economy, but they chose to overtax the sector and pad up the costs artificially, which has been counterproductive. Look the support the Gulf airlines get, or even what the African carriers get. The Indian government has done zilch in comparison.
In such a scenario, a one-time bailout, for all airlines, would the best atonement, for allowing airlines to fail would be counterproductive for India, which should one of the top five economies in the next 20 years.
And as an aviation enthusiast, it would be sad to see Kingfisher Airlines die.
Posted by Rajeev at 5:32 PM