There are a few places that one loves to visit. Bangalore is one such place for me.
I landed in Bangalore early yesterday morning, en route to Maddur on the Bangalore Mysore Highway.
One of the worst things about traveling on early morning flights is the way the sleep pattern gets screwed. But the cool weather of Bangalore city that I experienced on landing had a magical effect of instantly invigorating my sleep deprived mind and soul.
In a few moments we were on the road headed towards Maddur. The sad part about cities here is the painful commute one has to endure. It took us a painful 90 minutes to get to the outskirts of Bangalore city. Once we were out of the city, we almost flew! The highway is pretty smooth and we cruised along at speed of over 100 kilometers an hour.
In about an hours time, we touched Janalokpada. That is where Heaven truly is, Heaven on earth!!! I meant Kamat's Lokaruchi. I had written about the lovely time we had at Kamat's Lokaruchi a few months back and this opportunity of being here at Kamat's Lokaruchi again was like Godsend!
It was nearly 11 am, a good time for coffee. We landed up at Kamat's and ordered coffees and some snacks - rava dosai, mude idlis (a Mangalorean variant of the idli, steamed in banana leaves) and vadais. 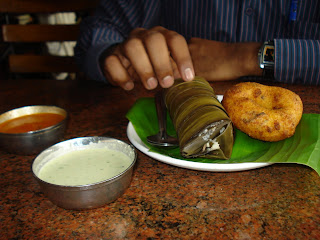 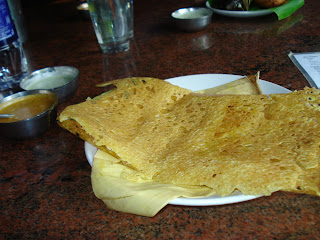 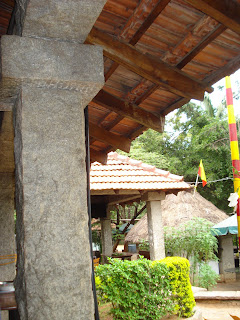 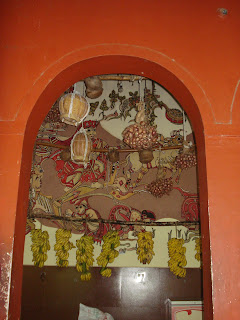 The rava dosai was unique and flavourful. Ginger and whole peppercorns had been mixed in the batter and the flavours of these spices blended into the crêpe really well! I bet these kinds of dosais are never to be found in cities like Mumbai or Delhi. The ambiance was very traditional and rustic - a throwback to yesteryears!
I was tempted to have a vadai with the filter coffee. The vadai was crisp on the outside but really soft on the inside, which made devouring the vadai an absolutely divine experience. The filter coffee was strong and steaming, an absolute nirvana for the sleep deprived soul!
The coffee did the magic - we were awake for the 30 minute drive into Maddur! The detour from the highway took us deep into the countryside. Green paddy fields, flowering sugarcanes and coconut groves made for an idyllic picture postcard backdrop. We stopped to have sugarcane juice. It was ages since I had the green nectar. This variety was unique, it was spiced with ginger, mint and rock salt. As we stood under the shade of coconut palms sipping on the juice, there was a cool breeze blowing, but the sun was warm! It was a pretty enchanting sight! 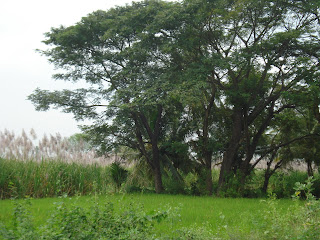 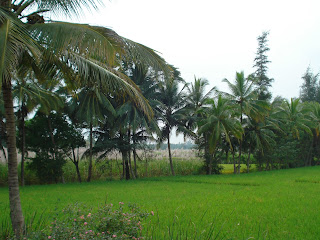 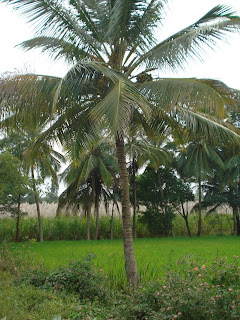 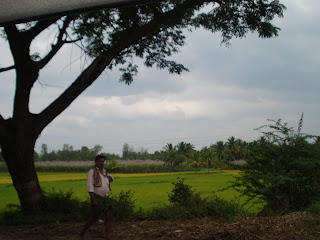 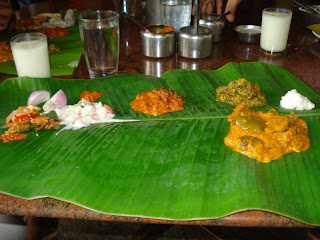 And then it was time to return to Bangalore city. It was 3PM, we were famished. We had to stop again at Kamat's Lokaruchi for a north Karnataka thali! Again that was an astounding meal, with baby aubergines in a spicy gravy, assorted greens, chutneys, pickles, sambhars and rasams!
Soon we were back in Bangalore and there was work to attend to. After finishing off my meetings, it was time to catch-up with old friends.
I met one of our friends who have a baby girl. This was the first time I was meeting the little one. What a pretty little kid she is! In the beginning she was quite cranky. But then I gave her two brightly coloured boxes of toys that I had bought for her earlier that evening. Her eyes lit up, her lips curved into the sweetest smile I had ever seen. The smile revealed one tooth on the upper jaw and two on the lower, much like stalactites and stalagmites in cave!
She looked at her mom for approval - the nod transformed her crankiness into squeals of pure unadulterated joy! What a sight that was! Kids are somehow like clean new slates - minds with clear and clean emotion. As one grows older, experiences cloud the slate, that is the way of this world!
The next port of call was at an old friend's place. We both studied together, for two years, in higher secondary, at DAV College, Chandigarh. We became friends and he was a vital part of my support system in Chandigarh. At that time, way back in 1992, long distance calls were exorbitant. Calling home was a luxury. My hostel had just one phone for the 1000 of us, that too for a limited 2-3 hours in the afternoon. So my folks used to leave urgent messages at my friend's place, who incidentally was a day scholar. The next day, I would promptly get the message. Sometimes when I was homesick, I used to visit his home in Sector 44 to have lunch! What a welcome relief that used to be from the watery, tasteless hostel food - round fluffy chapattis, nice thick dal and vegetables.
After we graduated from DAV College, my pal and his family shifted to Delhi while I stayed on, joined PEC in Chandigarh. We stayed in touch for 2 years after that - he went on to do a hotel management course at Jaipur. Then we lost touch.
But then a few years back, I joined Facebook and soon realised that this kind of social networking was a wonderful way to reconnect with long-lost old pals. I finally tracked him on Facebook last Diwali. We spoke a couple of times and did try to meet when I was in Bangalore or he was in Mumbai, but the meeting was elusive.
This was the chance - meeting an old pal after something like 17-18 years. He invited me home for a Biryani dinner! And then we met - my friend had not changed a bit. He is just the same. It was nice hear his stories of how he moved from hotel management to the airline industry to the Indian Army and then to a corporate role. All I could do is admire his hardiness and adaptability to varied roles!
We had a few Breezers followed by the amazing chicken Biryani and just went on talking late into the night about DAV, Chandigarh city, life in Delhi and stuff of that sort!
I must say it was quite an eventful day. It's always invigorating catching up with old friends and spending time with babies - that's what I call a heady cocktail of nostalgia and envisioning the tomorrow that the little ones of today will create when they grow up!
Posted by Rajeev at 1:30 AM

nice to read this as i am from Blore