Of all places that I have visited, one place that I love coming back to is the Southern temple city of Madurai (மதுரை).
Located on the River Vaigai, Madurai has been a major settlement for over two millennia now. It is one of the oldest continuously inhabited cities in the world. Records of the era of Alexander and Chanakya have talked highly of this city. The Greek ethnographer, Megasthenes referred to Madurai as "Methora" in his works of third century BC.
One theory suggests that the name Madurai can be traced to the Tamil name Madhura (sweetness). Another popular theory suggests that the name of the city is the derivation of the word Marutham, a species of trees that once grew on the banks of the River Vaigai. According to legend, the original city of Madurai, called Then Madurai (Madurai of South), was destroyed by a tsunami in the ancient era, after which the city was moved inland to its present location.
History is history, but the Madurai of today owes a lot to the past. The centre of attraction in this divine city is the Meenakshi Amman Temple, also known as the Meenakshi Sundareswarar Temple. Legend has it that the temple was founded by Lord Indra - he felt a peace unknown when visiting this area and went abut setting up this temple in honour of Goddess Parvati, the consort of Lord Shiva.
In the medieval era, Muslim invaders are said to have ransacked this temple. It is is strange that certain people find it so difficult to live in peace and go about ransacking, plundering and terrorizing the work. But then it is the greatness of India, of the Hindu belief and of India's  people that our beliefs, our ideals and mythology still live on, strongly. Testimony of this lies in the fact the ransacked temple was rebuilt and restored in the 1500s by the Nayaka kings of this area.
Today the Temple stands tall in all is splendor and glory beckoning people like Neeti and me. We first visited the Temple in 2007 when we took a 3 day break in Madurai. Since then we were always on the lookout for a chance to come back. I too did visit the Temple twice alone after 2007, while on trips to Thirunelveli but it to be with Neeti to complete the experience. This was the chance and we did not mind a late-night rendezvous at Chennai airport, staying up all night to catch the 6.50AM Jet Airways flight into Madurai just to experience the serenity of this beautiful Temple.
After settling in and catching up on lost sleep, it was time to venture out into the city. I was recommended a place called Murugan Idli Shop by a friend. I was told this place is supposed to have the best idlis available anywhere in this world. But I had dismissed this thinking "What could be so special in the humble  idlis?"
Then, I would say it's my good fortune, I mentioned about Murugans to  Neeti  and she was totally sold out on this idea of visiting Murugans. Thus began our quest for humble  idlis at Murugans. Located in a nondescript corner of West Masi Street, Murugans was not hard o find at all.
That is the beauty of this historic town. The Temple is the literally the centre of all activity in the city. The internet tells me that Vishwantha Nayaka, of the Nayaka dynasty, redesigned the city in accordance with the principles laid down in Shilpa Shastras (the Vedic rules of architecture). The city was laid out in the shape of square with a series of concentric streets culminating from the temple. These squares continue to retain their traditional names, Aadi, Chittirai, Avani-moola and Masi streets (of which West Masi Street is a part), corresponding to Tamil month names. Ancient Tamil classics mention that the temple was the center of the city and the streets happened to be radiating out like lotus and its petals. While the radiating lotus concept may be there in the truest sense, the concentric streets still give the city a lot of structure and a timeless character, now that's a lesson for our modern town planners, especially the corrupt morons who manage BMC here in Mumbai.
It was then time to savour the delights at Murugans. To begin the meal, in came two plates of idlis, sambhar and three delightfully tangy chutneys - one of mint-coriander, tomato-ginger and tamarind, all in a base of coconut. The idlis were steaming hot and heavenly and simply melted away on my tongue - if you do not believe this, visit Murugans at Madurai and experience it for yourself.
For the main course, we ordered lemon rice or Elumichai Satham (எலுமிச்சை சதம்) and tomato rice or Thakkali Sadham (தக்காளி சதம்). Both were fresh and hot with unique flavours of purity only to be found in restaurants where freshness is kosher, the turnaround is so fast that everything has to be and actually so fresh and flavourful  that's what makes food at these joints so good!
The rice was followed by another round of  idlis - that was pure temptation. On the waiter's persistent recommendation, we ended our healthy meal with a unique dessert from Madurai - jigger thanda - an ingenious concoction of local caramel coloured ice-cream, cold milk, jaggery syrup topped up with falooda! 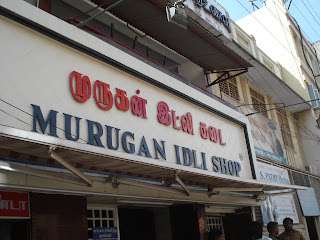 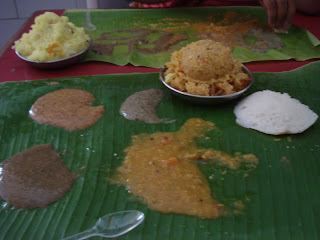 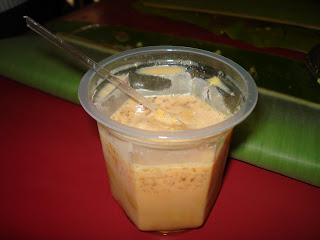 We were full with no space for filter coffee, so we walked around West Masi Street and beyond checking out knick-knacks here and there.
Voila, what I saw next was heavenly - Sri Krishna Sweets - we rushed in to buy mysore pak, the golden hued, heavenly sweet, which has been our favourite and cherished dessert for long. Today, this was to be our offering at the Temple, a feast for the Gods!
Next came the trip to the Temple - the whole reason why we were here in Madurai. We made an entry though the Gopuram at the southern end. After looking around to keep our shoes, passers-by suggested that we keep our shoes and bags at one of the shops around - the shopkeepers, Gujaratis and Marwaris, gladly give this "service" in the hope that you would ultimately buy something from there! Luckily we found an official authorised cloak room, where kept our shoes securely and entered the precincts of this historic temple, incidentally after which my mother was named!
What followed was an indescribable spiritual experience at the shrines of Goddess Meenakshi and Lord Sundareswarar. We then spent time around admiring the carvings and paintings depicting our mythological characters. Some of the works are so exquisite that this Temple complex truly deserves to be preserved for the future. There is little doubt on why the Temple was a candidate for the Seven Wonders! 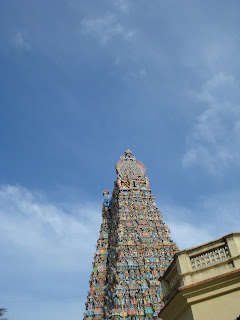 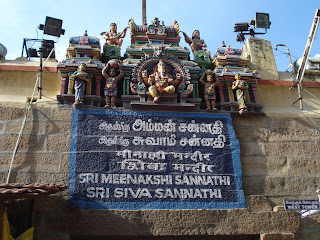 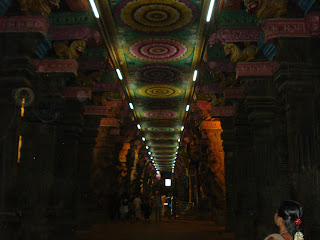 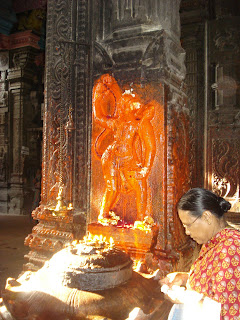 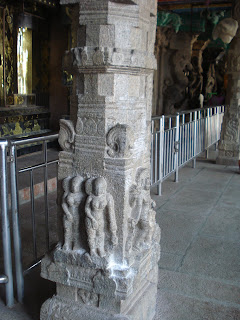 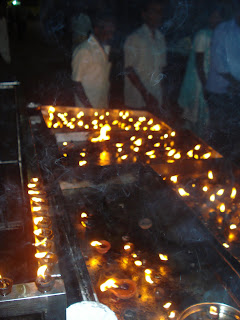 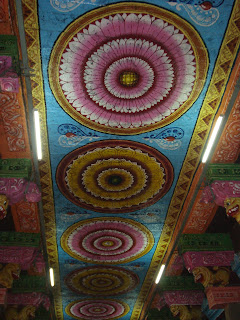 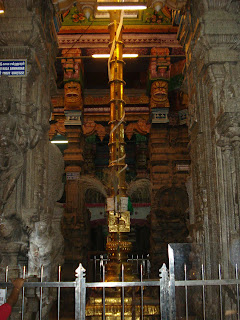 We gradually made our way to the exit and passed through the Gopuram on the western side - is this where in 2007 the Temple elephant sneezed upon Neeti? The sneeze ran into hundreds of deafening decibels and was like a strong gust of wind with little droplets showered upon her - a funny incident (or a blessing from God?) we can never forget!!!
Posted by Rajeev at 5:43 PM

Thanks again for capturing my hometown's features in detail. Here are a few more places/things you may want to cover the next time (I'm sure you'll, won't ya ;-).
For the sightseer & shopper:
> 2 of the 6 padaiveedus (Thirupparankundram & Azhagarkovil) of the younger 'Commander-in-Chief' son - Lord Muruga or Karthikeya - of Goddess Meenakshi & Lord Sundareshwara. The third one - Palani - is also not too far from Madurai!
> Koodal Azhagar temple - Lord Vishnu here is said to have given his sister Meenakshi in marriage to Lord Shiva!
> Kodaikanal, a still green, popular hill station
> Numerous shops that are organized by the type of stuff (bangles, stationery, toys, etc.) they sell in small radial streets that branch off from the temple
> Pudhumandapam for its multitude of stores selling a variety of goods from metal to handicrafts
> Thirumalai Naicker Mahal - palace of the Naik king (those of Pandian kings for whom Madurai was Capital aren't to be found anywhere!)
For the Foodie:
> Lakshmi Vilas Thirunelveli Lala Mittai Kadai for delicious wheat Halwa and pepper savories (there are many copycat halwa shops)
> Original Nagapattinam Neimittai Kadai - one of the oldest sweet shops for their unique Halwa that needs to be consumed within a day or two
> Raja Barley - a bakery that's said to be in existence from world war days. Try the Macroon made of cashew here
> Maappillai Vinayagar Goli & Panneer Soda
> Ondippili Nannari Sarbat store (near Pudumandapam)
> Piping hot decoction Coffee @ Visalam Coffee
> One of the numerous 'Mess' famous for their inexpensive South Indian meals (thali)

Look forward to your next travelogue of Thoonga Nagaram to see how many of these you managed to cover!