In the first week of April, Neeti and I visited Delhi for a family function. After the function got over at Delhi, my folks and I left for my hometown. It was evening by then. Fortunately, the National Highway 1 (NH-1) had a decent traffic, which ensured that we could move on at a decent speed.
We steered clear of the roadside eateries or dhabhas at Murthal. As always all the dhabhas were teeming with people, with an endless number of cars neatly parked by the side of the highway. Clearly, Indians are moving around, traveling and spending. What slowdown are we talking of? Nothing seemed to have slowed in these parts. The Highway Economy clearly is booming!
But by the time we hit Karnal, we all were famished. Instead of reaching home at an unearthly hour and having dinner, my folks decided to stop at the Haveli and give me a traditional treat. Such offers of treats have to be graciously accepted, but this time it was accepted with gusto! This is the kind of food that I have always loved - the rustic earthiness of traditional Punjabi food is uniquely pleasing to the senses.
Haveli has tried to recreate the traditional Punjabi village set up right on the NH-1, just after Karnal. The place is adorned with brass cooking vessels and utensils, martbaans or earthen vessels specifically used for storing pickles, chulhas - wood or coal fired earthen stoves, gharras - earthen pots to cool water and a lot of other stuff that I had seen as kid at my grandparents' place. Brass plates and tumblers were also used to decorate the place.
At least in urban North India households, it is difficult to find these utensils today. Brassware has given way to steel and in some cases ceramic-ware and glassware. Perhaps in the interiors of Punjab and Haryana, the peasantry must still be using these traditional utensils, though steel has made inroads. But the tradition of using brass is on it way out for sure. I am pretty sure that coming generations would certainly not even know what all these things were - using these would be alien concepts.
But places like the Haveli are keeping those traditions alive for youngsters to see and experience. 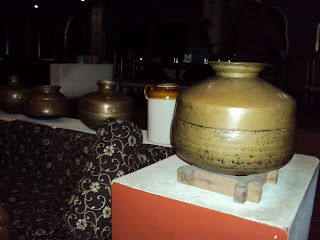 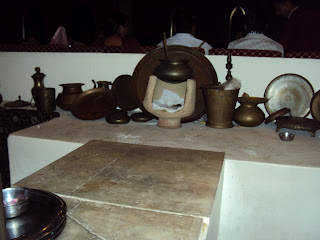 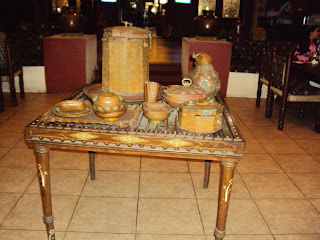 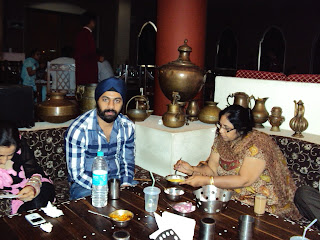 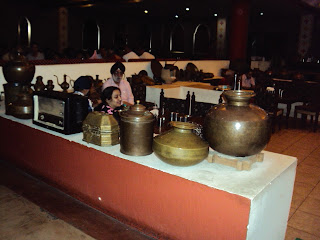 Even at 10PM, Haveli was full of families enjoying hearty traditional Punjabi meals. The family in the photos above seemed particularly happy after having hearty parathas with generous doses of white butter. It is a fact that for generations Punjabis have zealously devoured milk and milk products and yet there were few cases of heart disease. Now as times have progressed, lives have become sedentary but stress has increased manifold, resulting in such diseases, but traditional foods are often as culprits!
We were served by a friendly Garhwali waiter, who deceptively looked like a Punjabi dressed in a salwar kameez! He mentioned that life was tough for him in the hills - agriculture was tough but the lure of the highway economy brought him here and was quite happy with his job.


It was time to order food. For me, it had to be a traditional Amritsari kulcha (unleavened bread stuffed with spicy mashed potatoes and cottage cheese) with chholey (a spicy chickpea gravy) served with a generous helping of sliced onions and a generous dollop of white butter. 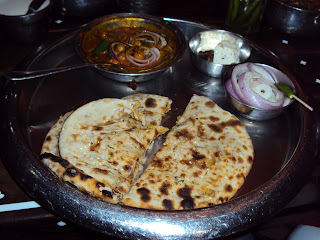 My parents played a bit conservative and ordered tandoori rotis, moong dal tadka (tempered moong lentils) aloo-gobhi - a potato and cauliflower dish garnished with juliennes of fresh, sharp ginger and coriander. I particularly liked the way they served pickled green chillies - one could simply lift them with the toothpicks and bite on them to set the tongue on fire. But then we had ordered a bowl of cool yogurt to beat the spiciness! 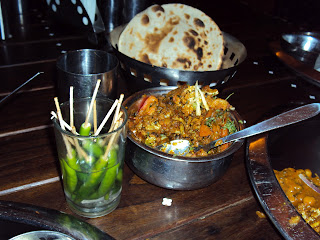 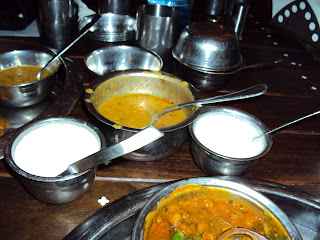 And what a hearty meal that was! It was simply mindblowing! But we had to had to hit the highway again to reach Yamuna Nagar before midnight!
Posted by Rajeev at 8:26 PM

Yumm...I think my group will be going on this road in August..If we do, will definitely take your reco on this place!

This is a very informative writeup! You should also try the Pind Balluchi Restaurant is another good joint! Unfortunately, these joints are very difficult to maintain as the footfall is never consistent!