My Plate On The Highway

There is nothing as gratifying to the senses, and to the belly, than experiencing plates, of the culinary kind, on India's highways. I am not talking about Rocky and Mayur's show Highway on My Plate, I am talking of my culinary experiences on Indian highways here.
As any typical north Indian, for me, for years, the highway meant NH1, or the Grand Trunk Road, as it was called in the years gone by. And that meant stopping by at the Murthal dhabas for sinfully thick tandoori aloo parathas, with huge dollops of fresh white butter (be sure to fix an appointment with the cardiologist after such heavy duty Punjabi food) and baingan bhartha! The first time we stopped there for a hearty meal was in 1991, at Gulshan Dhaba, and we were pleasantly gratified, for then eating out was not the norm for us. The pleasure of eating crispy, hot parathas and bhartha was complemented by the sight of a herd of white rabbits chomping on their crunchy dinner of cabbages and carrots.
In these last twenty years, the dhabas along the NH1 have undergone quite a transformation. From plain hearty Punjabi delicacies, they have graduated to stuff like dosas (clearly, this indicates a growing homogenisation of the Indian tastebuds), pizzas and the Indian version of Chinese cuisine, the greasy variety that comes with loads of turmeric!
Travelling along the NH1, it is all but obvious that dhaba food has become a full fledged industry. Every kilometer along the highway will have at least 2-3 dhabas. And each of them is packed 24/7, with a bevy of cars and SUVs lined up in the parking. The patrons are obviously the very homesick, burly Punjabi men and svelte females either headed abroad to the West (Amrikka or Kanadda, as they would call the United States and Canada!!!) or returning back, downing makki di rotis and sarson da saag, alongwith full bloodied daal makhanis. Needless to say, it is the authentic taste of home that us, Punjabis, miss so much, that gets in the flock into the NH1 dhabas! It holds true for me, for sure!
While the turnaround is fast, cover rotations is in double-digits and food is fresh, occasionally they do give you a bad tummy, like the way Mom had a few months back!
Things have taken a chic and modern turn at places like the Haveli at Karnal, where there is an attempt to recreate the environment of the pind, the village, with statuettes of, unmistakably, Punjabi women (in their characteristic Patiala salwars) doing a Gidda jig or churning a pot of cream for butter, or a mother oiling a Punjabi belle's hair, or a newly wed girl, with a choora giving her man water to drink, or a village munshi checking out his ledger or the village well! And to recreate the complete Punjabi experience, they have a gaily painted truck on the inside! 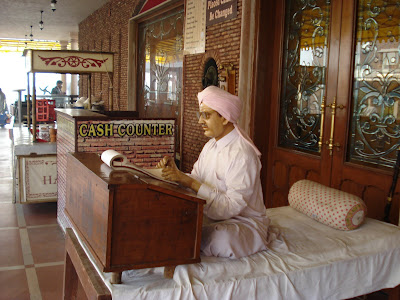 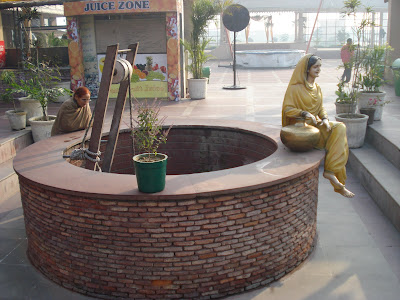 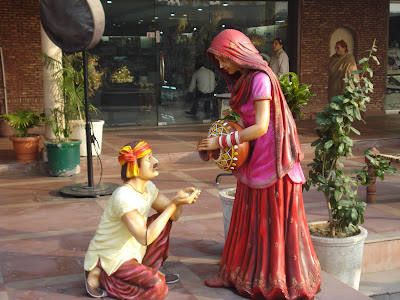 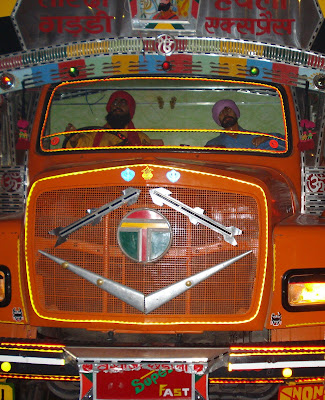 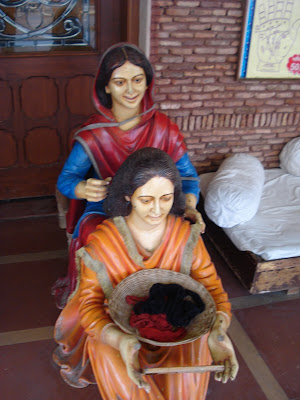 But all these chic developments on NH1 are faux. The real, the hardcore, the authentic stuff lies deep inside the heartland of Punjab. I recall driving from Pathankot to Amritsar way back in the summer of 2002 and we stopped by at a small, nondescript, countryside dhaba right next to the fields. Our family were the only patrons that sweltering June afternoon. We refreshed ourselves at the hand-pump and then dug into fresh tandoori rotis with daal makhani and some vegetables, sitting on charpoys. This was followed by glass-fulls of cool and the very refreshing masala lassi! My grandmom, Ammi, was thrilled to the core as this reminded her of her childhood! And as we returned home from Amritsar, we stopped by at a dhaba on the outskirts of Ludhiana, where the ingenuity of the Punjabi mind was in its full splendor - washing machines were being used churn out butter and lassi!
But while Punjab and Haryana have been instrumental in creating destinations out of highways, what can be called the "highway economy", I would not mind admitting that other states do have some small outlets that carry some real authentic local fare, though, nothing matches the scale and size of the NH1 highway economy!
Once travelling from Madurai to Thirunelveli, we stopped by for some real south Indian tiffins - that's what the localites call their snacks - crispy vadais, dosas and uthappams! The spiciness of sambhar complemented with sweet and warm filter coffee drained out all the exhaustion of the day!
Another time, at 11PM while returning from Thirunelveli to Madurai, we stopped at a military hotel (!!!) - that's what the South Indians call the places serving non vegetarian food. We had spicy kothu parotta with spicy chilli chicken, south Indian style with lots of curry leaves! The kothu parotta is made in an interesting way - the south Indian parotta is minced, using a two halves of a cut steel plate, on flat cast iron base - the kinds used to make dosas. In go chopped onions and chillies with other aromatic spices. (The video alongside gives a hint of how they come up with the delectable kothu parotta.) The concoction was heavenly and kept me salivating for two days!!!! 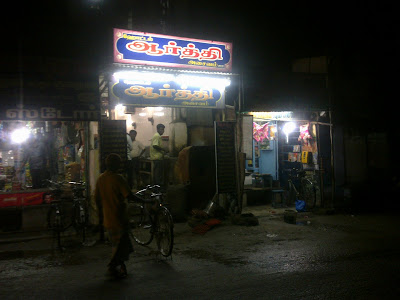 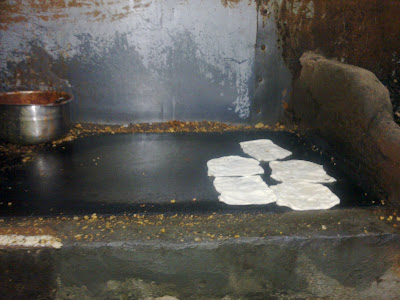 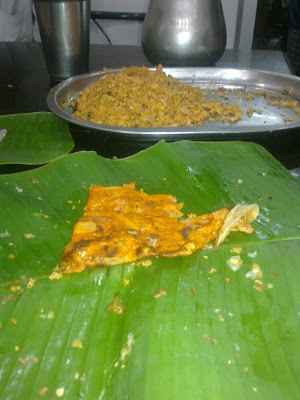 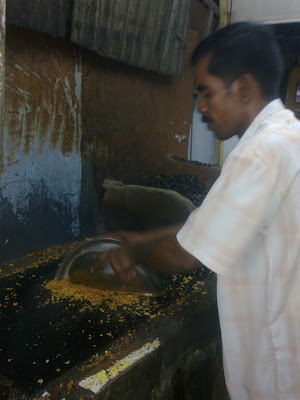 The beauty of south Indian roadside eateries is that they are absolutely clean and hygienic. And the sights of the food being put together right in front of your eyes is some kind of foreplay before the real thing happens - the food itself!!!!
One freezing winter night, I was travelling from Jodhpur to Jaisalmer. Our tummies were rumbling with hunger as we raced through the Thar. The driver suggested that we stop for some quickie grub at a hamlet called Dechu on the way. The eatery, Om Navrang, was fairly big and open air. They proudly advertised their winter menu - haldi (turmeric) ki sabzi and gajar ka halwa. We gulped down the haldi ki sabzi with aloo parathas, alongwith tea. The haldi ki sabzi is a winter Rajasthani speciality which is supposed to keep one warm. These unique delicacies are rare to find in any fancy restuarant in metros. You really need to get out, out of the city, the run of the mill eateries to enjoy this kind of stuff! 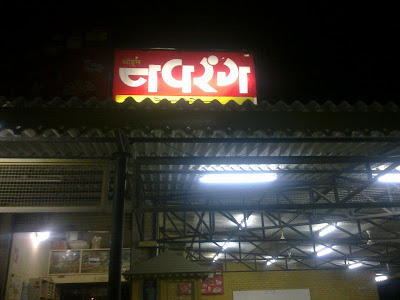 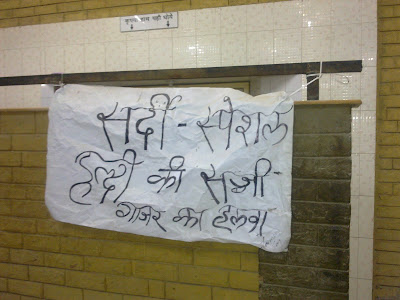 On a recent journey on the Bangalore Mysore highway, we stopped at the Kamat Lokaruchi at Janapadaloka, at the recommendation of a friend. The ambience was amazing and seemed out of yesteryears - stone flooring of 1930s-40s, characteristic thatches - reminded me of Malgudi Days of the Doordarshan days. The mythological murals gave the place an uncharacteristic aura, while hanging plantains and onions gave it a real rural touch! 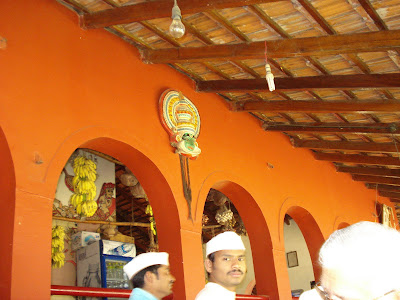 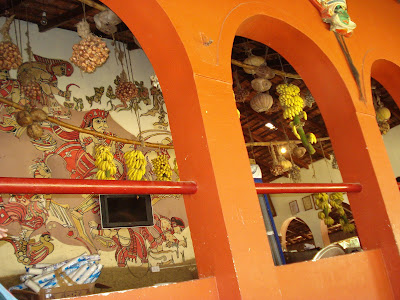 The curd rice at Kamat Lokaruchi was the best I ever had. The idlis (of the Mangalorean kind called Muday, steamed and rolled in banana leaves) were amazing - not the usual, conventional kinds. We also had the set meals - South Karnataka and Karavali - south Indian style - on fresh green banana leaves. The meal had fresh methi (fenugreek) leaves to be eaten with the ragi rotis. The uniqueness of Kamat Lokaruchi stood out - the earthy decor seemed out of another, bygone era, the service was impeccable and enthusiastic. And above all, that was the best Kannada food I ever had! 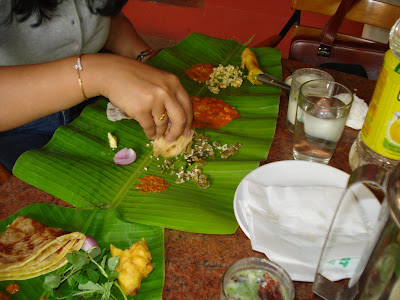 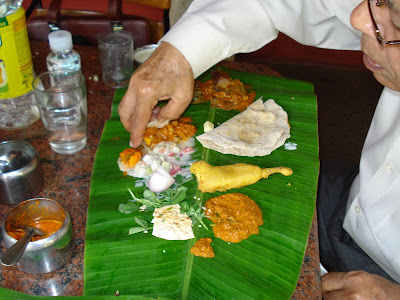 The real danger that the highway economy faces is from the McDonalds and Cafe Coffee Day kind of outlets that are mushrooming all over. For instance, on the Bangalore Mysore highway, I myself counted at leat 8-9 Cafe Coffee Day outlets (and that for sure is an underestimation). And to compete with the likes of Kamat Lokaruchi, Cafe Coffee Days have also started serving vadais, dosas and idlis! But authenticity is another question all together. Such a transformation is also underway on the NH1.
To see the detrioration that the highway economy could face, you must look at the food courts on the Mumbai Pune Expressway. While I do enjoy my vada pavs over there once in a while, the MacDonald-isation is all but obvious. You just have to eat and scoot. The eateries there are food factories - functional and mechanical. The ambience simply prevents you from savouring the rustic flavours. I wonder if that kind of fate would meet the NH1 dhabas or even the likes of Kamat Lokaruchi that are struggling to keep the rustic culinary traditions of yesteryears alive!
Will my plate on the highway taste the same twenty years from now? Will it be the "attithi devo bhava" or will it be an artificial "hi" followed by a quick "bye"?
Posted by Rajeev at 7:50 AM

Really liked this post. I have always loved to eat at a Dhaba.

Thanks for sharing valuable information, this is the best article which I have ever read, Here I’m sharing best “Homemade food online delivery” details, just go through it.
HOMEMADE FOOD ONLINE DELIVERY
HOMEMADE FOOD DELIVERY

What a delicious and informative post thank you so much for sharing this post. It is really helpful and it is easy to understand what are you trying to explain. I would like to suggest your website to more people. To be honest you should have to be appreciated for what you are doing. Lots of love from me.
Also if you have a bit of time then, read my recipes at chillionfire.com or, Food Recipes and suggest to me how to improve them.