There is nothing more appealing to the human heart than the flame of hope.
President Obama's campaign was centered around the audacity of hope, a spirit that permeated throughout America that "Yes, we can!". And that spirit resonated in President Obama's resounding victory in 2008.
In India, we had been steadily and exponentially losing the hope that brings a spring in our steps ever since 2004. It has been 10 years, but, still I have not been able to get over the fact that Prime Minister Vajpayeeji lost the mandate to govern India despite the great work that the NDA had done from 1999 to 2004. The tenure of Vajpayeeji was associated with pathbreaking strides made in development of the nation - the national highways project, power sector reforms and untangling the mess in telecom. There was a general feeling of well-being across all classes in Vajpayeeji's tenure.
Stunned as we were with the UPA victory in 2004, we went along with hope. The momentum of the Vajpayee era kept the nation going for sometime. But the rot set in. The Left and other coalition partners were blamed for the UPA's inability to do anything progressive. I as a common man bought that argument.
Then came the signing of the nuclear deal with the United States. That was when Prime Minister Manmohan Singh spiritedly stood up against his critics and saw the deal through, even though it was at the risk of guillotining his political future. I saw hope in Dr. Singh's conviction and backed him fully, when the 2009 elections were announced.
I had hoped that, Dr. Singh, who was the architect of modern India's resurgence in 1991, during Prime Minister Narasimha Rao's regime, would usher in the good times again. (Incidentally, I would rate Mr. Rao as India's best Prime Minister ever, followed by Vajpayeeji and Prime Minister Lal Bahadur Shastriji)
With the Left sidelined in the 2009 electoral verdict and no millstone around his neck, Dr. Singh was expected to steer the nation into a higher gear. But sadly, we drifted, aimlessly, into notorious economic doldrums. And that's when I asked myself, is this the guy who laid the blueprint of modern India in 1991?
We lost hope, as a nation, we drifted and that gloom was all pervasive. There was pain all around - household budgets shot up, business stagnated and there was utter chaos. And here was the Prime Minister who was a statesman abroad but at home, he was a mute spectator to the shameful shenanigans that the UPA government became so used to. It was ironic that we had a renowned economist Prime Minister who helped formulate President Obama and Chancellor Angela Merkel's economic strategies to navigate the United States and the European Union out of the mess they were in, yet here, in India, we lost a decade, valuable 10 years in which we could have shifted to a "new normal" of a growth trajectory.
Then catastrophe struck us. Even a school kid would realise that seeds of economic decay lie in the culture of doles, yet the UPA government, under the 'able' stewardship of an economist thought it was the bribe that could get them electoral success for eternity, as they said, "the poor cannot eat roads", so why build roads?
But as the Chinese say "Give a man a fish and you feed him for a day; teach a man to fish and you feed him for a lifetime". Under Dr. Singh, we lost an opportunity to feed our masses for a generation, with the right kind of economic opportunity that the nation lost out on.
Our Prime Minister seemed aloof, ignorant, insensitive and oblivious of the nation's pain. That was shameful. We as a country were orphaned, we were pushed around, we were taken for granted.
It was only much later that I realised that Dr. Singh was an accidental Prime Minister. But was it really an accident? And it turned out, Dr. Singh was a mukhauta or a mask, that Vajpayeeji was accused of being a few years back. 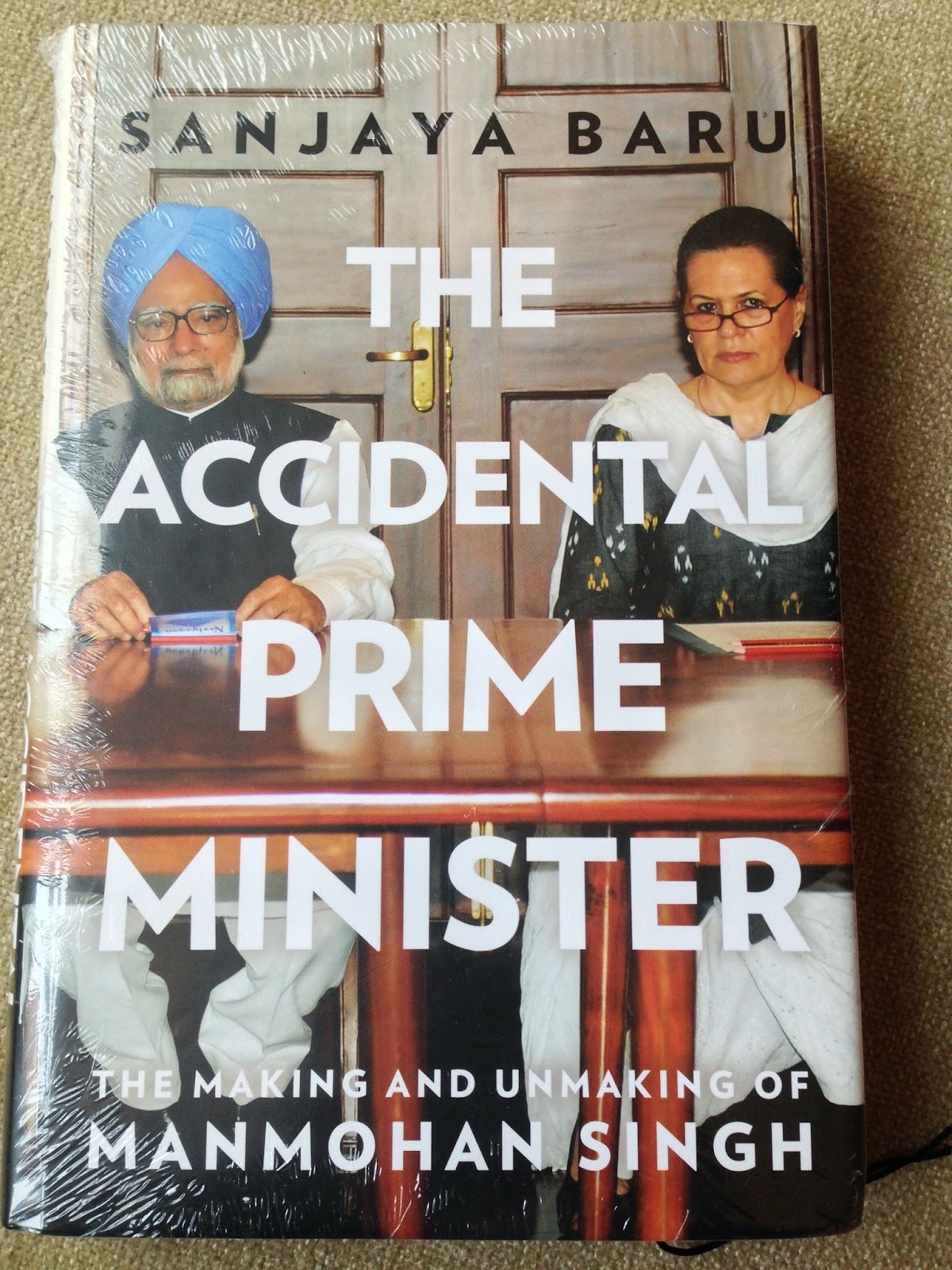 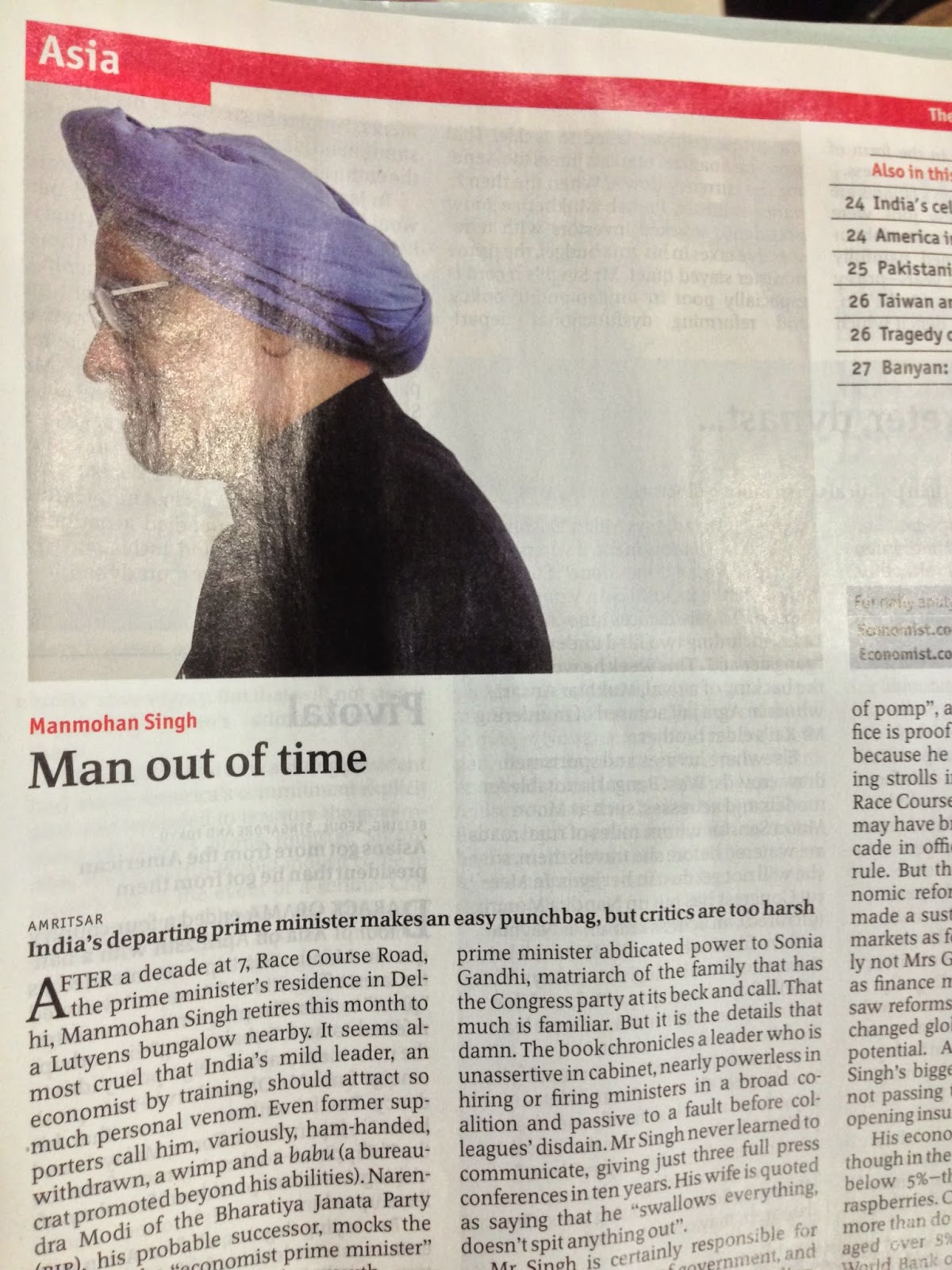 Can Dr. Singh escape the blame for being a mukhauta?

Certainly not, for as the Arabs say, "A person who does not speak out against the wrong is a mute devil". I would stop short of calling the gentlemanly Dr. Singh a devil, but he had to own up and I wonder if history would be kind to him at all.
In this vacuum came in Mr. Modi with a common-sensical agenda for shifting into the higher gears. He reminded us that the audacity of hope will always be in fashion. His agenda kindled the dying flame in our countrymen, which is evident in the increased footprint of the NDA in the verdict of the 2014 elections. 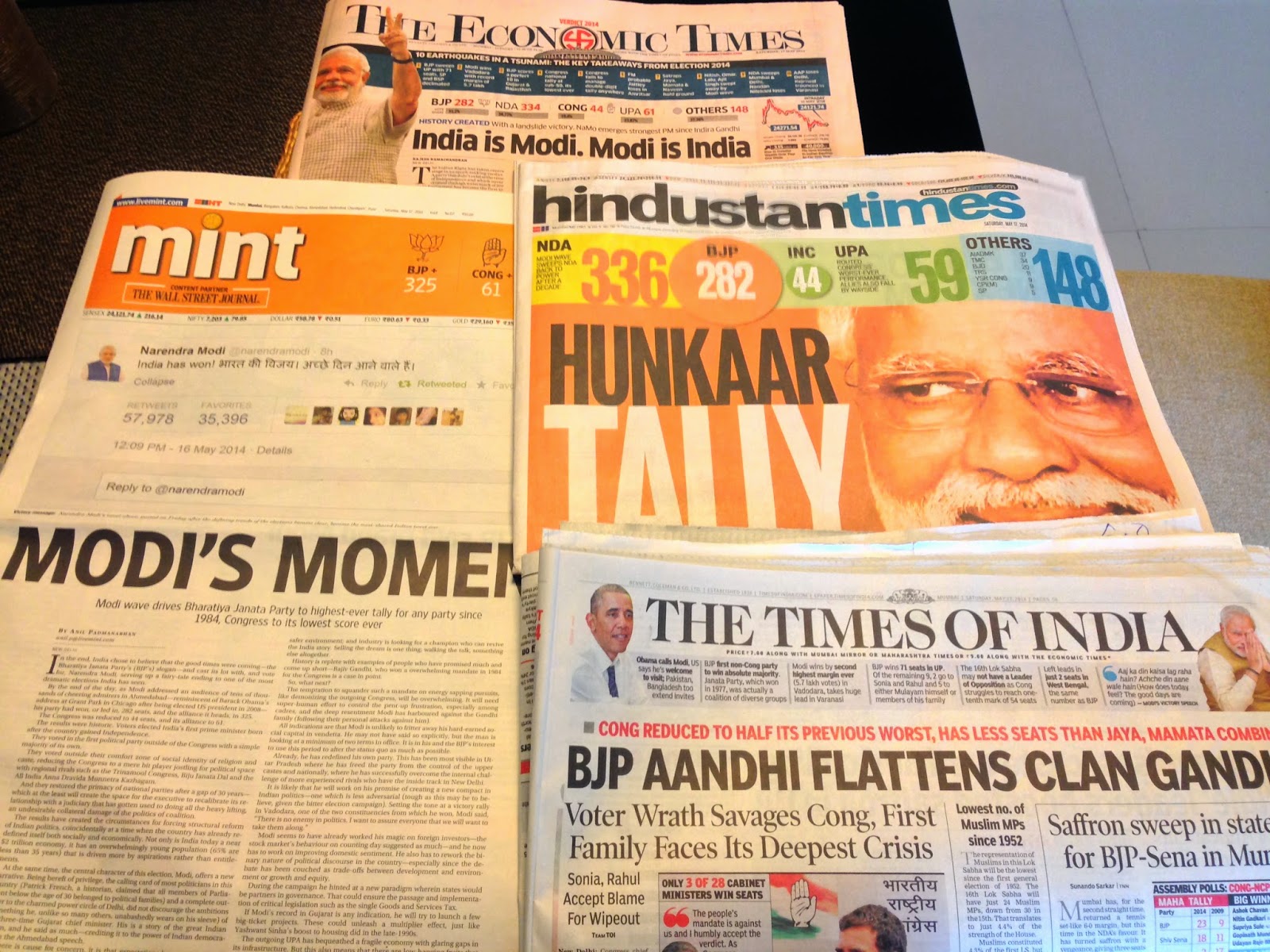 And the hope he had shown us has got him elected into the high office of this blessed nation. I wish Modiji and his team lots of luck and with grace of God and the nation's perseverance, we would more than make up for the lost decade.
Incidentally, this is my first blog on a political topic in the last two years. I must confess, I too had lost hope.
But, then as the human spirit is wont to, hope does spring eternal...
Posted by Rajeev at 4:10 PM

Every word you wrote is true. Narender Damodar Das Modi seems to be the last hope as for now. I am sure that he will try to keep it straight and simple initially and focus on grassroot development, which can be achieved with his determination along with realistic initiatives to enhance the public confidence further for various futuristic issues even while handling a complex nation like India.