Commonwealth Games - A Splendid Delhi and India on show... 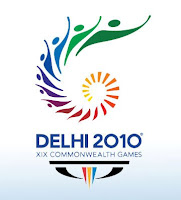 Jai Ho!
The XIX Commonwealth Games are now open.
What a splendid, splendorous display of India's richness, a riot of color and celebration of joy it was, to see the Jawaharlal Nehru Stadium all decked up with joyous performers and sports persons.
For me, the celebrations came as a big relief that the games were finally happening! Finally happening, despite the controversies that Kalmadi generated (and inspite of his "common wealth" principles).
The Commonwealth Games chief, Mike Fennell, should hang his head for his shameful comments on India, Indians and hygiene. Perhaps he should go, take a walk and chew some saunf or fennel(!!!!) to give him some relief for his absurd statements.
The opening ceremony represented a riot of colour. It was a real treat to watch flags of the 71 Commonwealth territories participating in the Games, for a vexillology (or a flag) freak like me.
To see the colourful flags of Antigua, Vanuatu, Niue, Tuvalu, Saint Kitts, Wales, Gibralter, Swaziland and Kenya flying in my city Delhi was indeed exhilarating. Sadly, flags of Tokelau, Fiji and Zimbabwe could not flutter in my Delhi - the latter two have been suspended from the Commonwealth.
I waited for the teams of my three Commonwealth countries to march. My heart skipped a beat when the team from my "motherland" Uganda came in. The other two countries that I have been associated with, Zambia and India came in to a thunderous applause by the crowd.
The English team walked in wearing a red sleeveless bandhgalas! I wondered whether that was that reverse colonialism at work?
Our desi, Indian, contingent walked in traditional, royal, smart and sexy maroon sherwanis and saris, showing the richness of our culture. The Scots looked amazing in their resplendent kilts! The Zambians behind the the flag bearer carried their full-size eagle flag in their hands, bringing back old memories!
It was particularly revolting to hear an applause for the Pakistani contingent. I wonder how many of those who have come in were actually ISI agents, being responsible for terror in India?
Despite the rumours that certain contingents may pullout, partially, the turnout was amazing especially from the Australians and New Zealanders. Reports also came in that the teams were rather pleased with the facilities on offer especially when compared to earlier Commonwealth Games, held in Melbourne and Kuala Lumpur. It appears India's growing economic clout prevailed over the nay-sayers.
A couple of things stood out - the applause for Atal Behari Vajpaypee, who credited for getting the Games to India were particularly thunderous. So were the mentions for President APJ Abdul Kalam and Ms. Shiela Dikshit. It would not be wrong to to say that Mr. Vajpayee and President Kalam are still much-loved and should surely be credited for building a resurgent nation that we see today, while Ms. Dikshit, despite all the flak she got recently, cannot be ignored for transforming my Delhi to a true world city!
(I sometimes wonder if Bombay was awarded the Games, surely, there would have been potholes, crazy bandobast, sheer chaos and endless confrontation between BMC, MMRDA, the state government, the armies(!), etc.)
The aerostat served as the impressive backdrop for the flags of the Commonwealth fraternity. The real killer was the aerostat which was made the Mahabodhi tree for our visitors to see.
The depiction of the seasons (particularly the Monsoons), yoga, Indian mornings and the railways was amazing.
We may hate to admit it, but we have the capability, we have the resources, the ingenuity to turn a failure in success, to create a masterpiece of out of a mess. (I can say that for sure - I have closely seen a number of luxury hotels under construction - one month to two weeks before launch, there is always a royal mess, but it is all turned around for a grand opening. Those hotels where I used to be sceptical now earn over $500 a room for a night!)
I knew that could happen with the Games facilities too - that's what I used to tell my sceptical friends and colleagues!
And I have been proved right!!!!
And now we have the next target - the Olympics - Chalo India Ne Bula Liya!
Posted by Rajeev at 11:15 PM

Totally agree Rajeev. The event was a masterful display of Indian culture. A riot of colour, sounds & sights of India. It made me proud to be an Indian.

It was also a big smack on the face for Indian Media who have been so negative on the run up to the games.

Hope the games turn out to be as good.