It is time for some Realpolitik!

It's common knowledge that good, pretty girls fall for the bad boys. Some perhaps know the dangers of falling for the bad boys, but still do and get hurt. Despite that, they fall head over heels all over again and again and again......, ignoring their misdemeanors and peccadilloes!
Perhaps living on the edge has an irresistible sex appeal that plain, steady guys can't match. They appear too dull and boring! 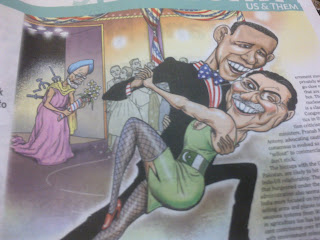 That seems to be the case with the United States's approach to our neighbourhood rogue, Pakistan. (The cartoon alongside , which appeared in the Crest edition of The Times of India, shows the opposite - America as the guy and Pakistan as the girl, with Manmohan Singh in the waiting, undoubtedly conveys the feeling that America is sleeping with the wrong partner!)
On October 4, 2010, the German newspaper, Der Spiegel, published something that we in India have known for ages. In an interview to the daily, the former Pakistani dictator, Pervez Musharraf, admitted to quite a lot - to using terror as an instrument of state policy, to using the armed forces to perpetrate terror, to the Talibanisation of Pakistani society, etc.
But the world had a muted reaction to the bad boy's admissions.
Clearly, the world prefers to turn a blind eye to what Pakistan is upto, be it export of terror or nuclear proliferation. Rather the United States perversely does encourage terror and proliferation by Pakistan by funding it, time and again that it seems like paying ransom to a kidnapper or "protection money" to a goon.
Surprisingly, India also preferred to be silent, or rather mumbled just a bit. The dictator's admissions should have been blown into a big issue by India. If Prime Minister Manmohan Singh is truly the world statesman that he is made out to be, his world on Pakistan's should carry weight.
Sadly, the present administration in India lacks the guts to take any concrete geopolitical policy decision.
Now talking of the Obama administration, somehow, the recent policy decisions to move out of Afghanistan by 2011 gives me innumerable shivers. Not all in the world seem to understand Obama's urgency to pull out, especially when that very act could threaten American security.
Is Obama's pullout realpolitik or a mere fulfillment of an election promise? How is Obama's pullout policy justified? Has his ascent to power reduced the hatred the Islamic fundamentalists have for America? Have his Cairo speech and his Nobel Peace Prize brought about a change of heart in the Muslim world, have they made the world a safer place?
No one can answer these questions convincingly, that's my challenge.
The world remains as volatile as ever, no matter what Obama does to appease Pakistan, its fundamentalists and army, no matter how many Nobel Prizes he wins, no matter when he pulls out of Afghanistan.
Rather America's pullout from Afghanistan could potentially have undesired effects - turning Afghanistan-Pakistan into overt fundamentalist states relying fomenting extremism all over the world (just read about fundamentalism reaching Cambodia!), creating a vacuum that China would enter into altering geopolitical calculations adversely, and what not.
All these would adversely impact American interests the world over, probably accelerating America's fall as a great power.
Perhaps the best option if America has to pullout of Afghanistan would be to let Pakistan stew in its own juices - to capitalise on the hatred the Sindhis, Pashtuns, Punjabis and Balochs have for each other and carve up, break up Pakistan into 4-5 entities. Likewise for Afghanistan - breaking it up into Uzbek, Tajik and Hazara spheres of influence would buy us some time. A breakup would make terror an unviable, uneconomical option for these entities - they would be too small to survive, let alone support terror.
All this would have to be done with active support of the Americans, Iranians, Indians, Russians and the Central Asians. We surely can expect the Chinese to oppose this balkanisation.
Mr. Obama, it is time for some realpolitik!
Posted by Rajeev at 10:10 AM

Balkanisation is not always a good solution...we must ensure that the irritant of the Balkanisation of Pakistan namely Punjab and Waziristan are surrounded by India-friendly nation states...Sindh, Balochistan, NWFP etc....Raja mandala philosophy must not be forgotten if implementing this via USA.