Making Sense of the Sensex? 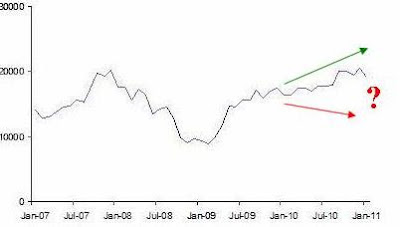 Making sense out of the Indian bellwether stock market index, the Sensex, is much like making sense out of sex.
Things just happen, believe me. they just do!
Things, indeed, did happen in the last few trading sessions, with the Sensexbeginning its free-fall last week. That was just when the supposed experts on the markets were predicting the index touching 24,000 to 30,000 levels.
Isn't it amazing to see the frequency with which these predictions go wrong?
Just three years back, before the liquidity crunch induced the global slowdown, market pundits were predicting levels of 30,000 to 40,000.
But these predictions have never seen light of the day, at least till today.
It is true that we go overboard both with our pessimism as well as with our optimism. I remember those days in the early 2000s, when I religiously started micro-SIPping on the markets through mutual funds, 8,000 was a great big deal, with the levels nowhere being in sight. Then by 2002, markets tanked to the hellish 2,800 levels only to kiss 8,000 by 2005-2006. In all that my SIPping added to quite a lot in terms of an impressive return, though the absolute quantum was minuscule!
That was when people were starting to talk of India.
Today pessimism is in, I am told, because of runaway inflation, increasing crude oil prices and consequent growth concerns.
But then, India, with its 1 billion odd people will grow over the next 20-30 years, will consume, will produce for the world and will extend its services Timbuktu to Machhu Pichhu. If one does have that confidence in India, it will never be a wrong time to place a long term bet on the markets, even when it doesn't seem to make any sense at all (like sex!), even when things just seem to happen.....
Posted by Rajeev at 9:51 PM