From the Cradle of the Silk Route

After reaching the Nubra Valley last evening, we went to check out the sulphur springs at Panamik. The road to Panamik snaked along the Shyok River and through quaint villages and fields. 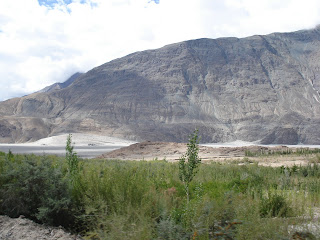 These villages are like oases in this cold desert. I imagine they must have provided a lot of succor to caravans, criss-crossing the continent, in the days of the Silk Route!
The weather played truant and the sun was about to set, so we skipped Panamik Lake and headed back to our pit stop for the night, a tented camp at Sumur, amidst fields of vegetables, marigolds and sunflowers. 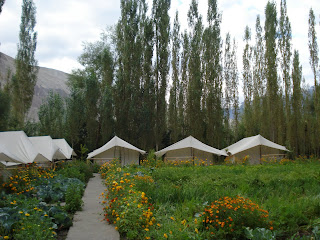 This morning we headed to Hundar, home to the Bactrian camels, a legacy of the Silk Route, when caravans used these beasts to transport silk, spices, gunpowder and other wares. Little seems to have changed in these parts, except for a few army convoys or tourist taxis passing. 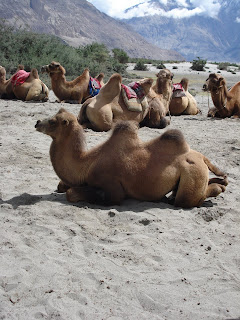 The Nubra Valley is of strategic importance to the Indian armed forces. Nubra is the gateway to the Siachen Glacier, the world's highest warfield. Because of this one needs special permits to visit the Valley.
We came across an Indian Army convoy which had stopped in a meadow. The soldiers, numbering about 50 or so, some were resting but most were on their mobile phones. Presumably they were headed to Siachen and this was probably a good place to catch up with families while the signals were still strong. This is true sacrifice, the Indian Army soldiers leave their homes, their loved ones, everything behind just to guard us on these icy frontiers. I doff my hat to these brave men in uniform. 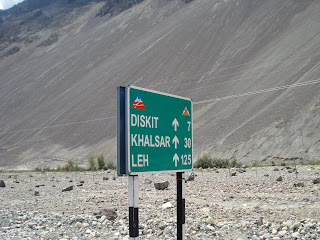 The next stop was at Diksit Gompa monastery, an ancient seat of Tibetan Buddhism since ancient times. Located in a sea of Stupas, the Gompa itself is quite nondescript. Stupas are small shrines containing relics and are believed to have protective powers - shield travelers from accidents, prevent rivers from flooding. 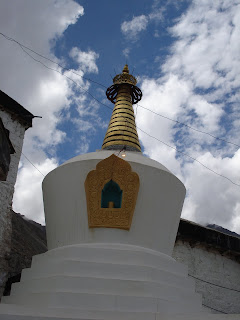 After steep breathless climb, we reached the monastery. It was a peaceful 10 minutes there, turning the prayer wheels and bowing before the Lord Buddha! We got ourselves photographed with monks - little boys and toothless aging monks! 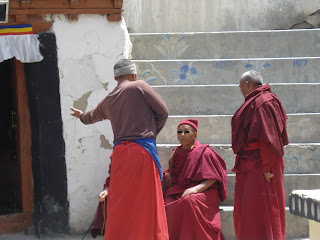 The view from the Gompa was stunning with the 5-storey high Maitreya Buddha, overlooking the Nubra Valley, blessing the valley with fertility and prosperity. 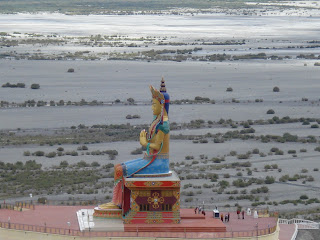 As we started back for Leh from this cradle of the Silk Route, I could only wonder how many secrets from the past that this Valley holds!
Posted by Rajeev at 10:22 PM