After months of meticulous planning, the D-Day finally arrived!
We woke up early for our early morning departure to Leh, Ladakh. We boarded the Jet Airways Boeing 737, at Delhi's swanky new terminal T3, as scheduled at about 6.30AM and were airborne in no time.
We flew in the northerly direction, overflying my hometown, Yamuna Nagar, Simla, Rohtang Pass and Zanskar Valley. There were dense white clouds below us, but weather was expected to clear up in Leh, as it is expected to be at this time of the year.
Very soon the Route Display on the IFE showed we were over Leh. The expectation in our minds, and hearts, had built up a great deal. The Captain, Vishal Sharma, made an announcement that things in Leh had taken a turn for the worse, weather-wise. Since a visual approach for Leh airport is required, landing in adverse weather would not be advisable. Leh being a high altitude airport, pilots prefer to go visual in their approach. The Captain chose to turn back to Delhi and wait for a while, till weather in Leh cleared up.
We were crestfallen, what happens to the break that we had been planning for long now?
We landed in Delhi, and after a while in the aircraft it was announced that the flight stood cancelled. We had by then booked an alternate flight, with GoAir, thanks to the mobile enabled site of Makemytrip.com.
We got off and then there was a struggle with arrogant staff, to get the fare refund, on Jet Airways. That struggle lasted about 2 hours(!) and they call themselves the best airline in India(?). What's odd is that Kingfisher landed in Leh after the ETA of Jet Airways. Couldn't Captain Vishal Sharma divert the flight to Srinagar or Jammu instead of Delhi? That would have bought us some time.
So headed back home, feeling pooped, kind of jet lagged.
The next morning we had to wake up pretty early at 2AM to reach the airport at 3AM - the check-in time had been increased to 2 hours as there was enhanced security because of the Independence Day celebrations coming up.
At the airport, we met quite a few passengers from yesterday's Jet Airways who chose not to take up their offer for a special flight at 930AM today. There was an absolute trust deficit amongst passengers because of the way Jet had behaved yesterday.
GoAir's flight was pretty uneventful to begin with. Their head steward had an irritating accent, while the stewardess looked like well painted mannequin!
But the redemption for all the stress of yesterday came faster than I expected. A new day was dawning! The rising sun in the east was a sight to behold (we had chosen seats specifically for this view). In some time the mighty snow capped Himalayas became visible with the thinning cloud cover. An amazing sight, the mighty peaks left us nothing but mesmerized. Words cannot describe that feeling, such surely that was the sweetest redemption, that came with the dawning of the new day! 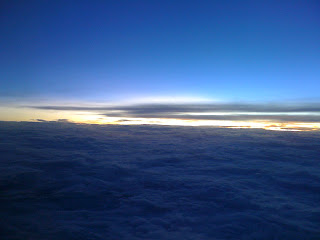 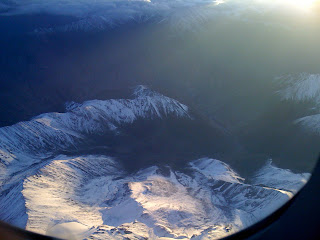 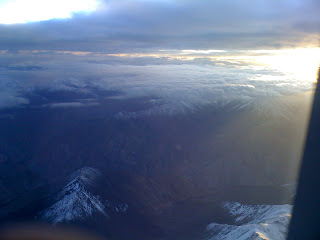 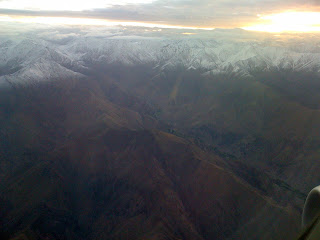 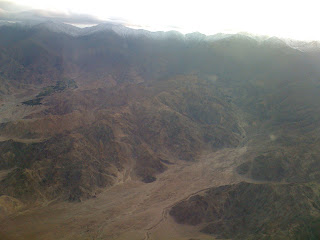