The Paradise That Is Pangong Tso!

In the final leg of our tour of this icy wilderness, we left Leh city for Pangong Tso, yesterday.
The route to Pangong Tso goes through the Changla Pass, which is at an altitude of 17,586 feet. The Changla Pass was as snowy as Khardung La, but as we had acclimatized by then, we were a lot more comfortable at the Pass! 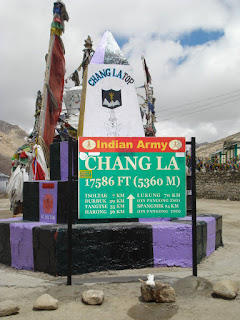 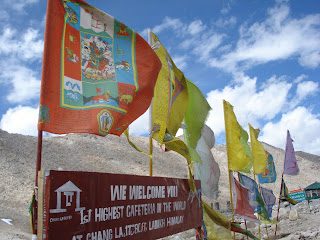 As we descended from Changla Pass, the environs gradually turned from drab to absolute pristine with each passing mile.
As we were approaching the forward area, we passed by a number of military bases, some small, some big. These establishments are some what like mini-cities of sorts, sustaining the local economy. Each garrison has a uniform shop, a grocery supplies shop, a phone booth, tea stalls, and many more providing employment to locals. No wonder, the armed forces form a significant contributor to the Ladakhi economy, besides tourism.
These army establishments are showing the way to environmental consciousness by using solar and wind energy for use during the day. The garrisons have installed quite a few solar panels and windmills.
We passed by the Tangtse Garrison, which had a practice range named after Major Shaitan Singh, a Param Vir Chakra awardee and martyr of the 1962 war with China. Major Singh had single-handedly and successful defended the Chushul sector, at over 14,000 feet against the invading Chinese. His exploits were proudly mentioned at Leh's Hall of Fame, lest we forget!
We also passed by Durbuk Garrison, which had a firing range named after General Zorawar Singh, a pioneering military campaigner who brought large parts of Ladakh under the Kingdom of Kashmir in the 1800s!
At Durbuk Garrison, we came across an Indian Air Force helicopter, a Mil Mi8, which was being loaded with supplies, presumably for some forward posts. 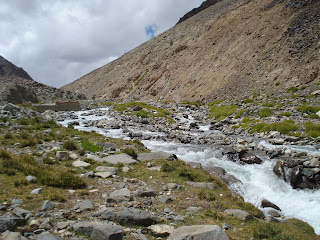 After crossing Tangste, we entered Changtang bioreserve. Changtang has a few pristine and verdent pastures with gushing streams running through. We came across herds of sheep, mountain goat, bovines and yak grazing around. 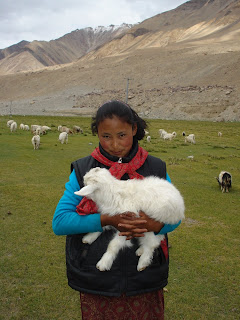 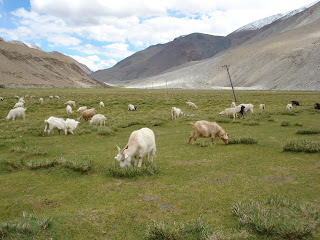 At one particularly picturesque pasture we stopped at, there was a teenage girl tending to her grazing sheep and goats. On seeing us watch the grazing animals with curiosity, she brought a goat calf for us to hold in our arms. I am told that it had velvety, soft and smooth hair. After a while, the little thing got a bit restless and when Neeti was holding her gingerly, the restless creature jumped from her arms and made a dash to the rest of the flock. It all happened in a split second, and the incident left us a wee bit shocked. The cute Ladakhi girl went all giggles and reassured us that nothing was amiss! 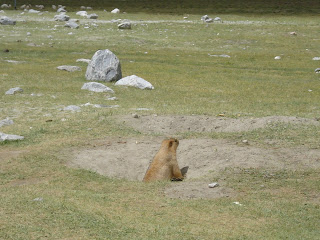 Another interesting sight was that of a marmot, a large ground squirrel coming out of its burrow, when it got the aroma of Parle G biscuit!
Relieved we proceed to our car, where Palges was anxiously waiting for us. I suppose he was a bit hungry or he wanted a pee-break. We were pleasantly surprised to experience that Ladakhis have a very keen civic sense. Leh city was spic and span, there was no garbage littered around. We never saw anyone peeing outdoors. Shops in the city also do not give plastic bags to shoppers to prevent contamination.
After sometime, beyond Lukung, we encountered a painfully bad patch of road, the worst (or rather the first bad road) we had encountered in our travails across Ladakh. (Roads in Ladakh are maintained extremely well by the Border Roads Organisation, which ensures that the frontiers are accessible all throughout the year to the armed forces!)
As we gained altitude, the mountains revealed how they have been weathered by the elements, the wind and rain. Some of the mountain-sides showed some very interesting patterns.
The anticipation of reaching Pangong Tso was a kind of analgesic, relieving us from the pain. Then it appeared - a signboard said "The first view of Pangong Lake". Truly that was a sight to behold - a shimmering pristine body of blue water a few kilometers away. 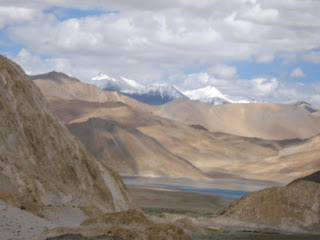 Pangong Tso is a 150 kilometer long salt-water - nearly 120 kilometers of the lake lies beyond the Line of Actual Control and is illegally occupied by China, ever since the 1962 war. The Indian Army maintains a constant vigil over the lake. In fact, Pangong Tso was opened to tourism only a few years back. Till then this was an area out of bounds for civilians.
The lake is surrounded by snow-clad mountains on all sides. Given the usually clear weather in these parts, the lake can be seen in magical colours depending on the time of the day.
After a short drive, we reached the shores of the highlight of the trip - Pangong Tso. Honestly I had never seen anything prettier than the lake before.
Despite the brightness of the sun, the air was rather cold. But we dared the elements and spent the rest of the afternoon by shores of the lake, peering into the crystal clear waters and the lofty mountains and imagining we were in Heaven, a rare feeling of true bliss, a feeling of oneness with the Almighty.
By evening, the clouds reappeared and we missed the riot of colour the riot of colour that Pangong Tso has to offer. 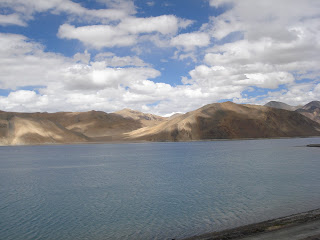 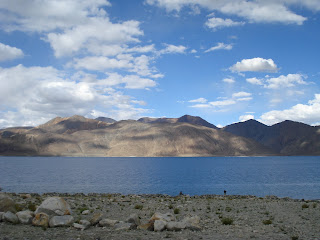 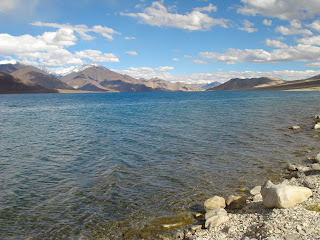 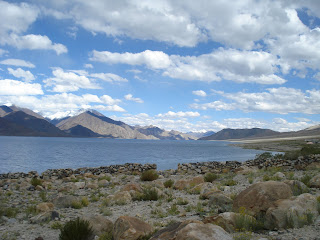 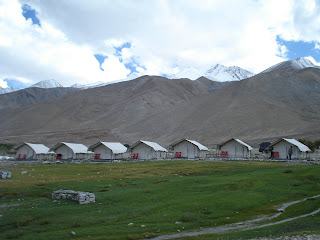 Before settling into our tent for the night, we walked along the campsite gazing at the stars. This was the first occasion in nearly 25 years that I could distinctly see the Milky Way!
Temperatures at night were sub-zero, but our tent was pretty cozy, though without heating arrangements.
Today morning it was time to head back to Leh city. Before leaving Pangong Tso, we stopped by at that long sandy strip where the closing scene of the Bollywood blockbuster, 3 Idiots, was shot. The panoramic views from this strip were postcard perfect! Looking into our territory illegally occupied by the Chinese, I could only speculate how beautiful the other side would be! And when would we reclaim that territory from the Chinese?
Leaving this paradise was heavy on our hearts, but leave we had to!
On the way back, we took the same route - Lukung, Chantang, Tangste, Durbuk, Changla, Tsoltak, Karu and Thiksey. At Changla, we had our snack - Maggi and bread-omelette, the latter was the best I ever had!
The journey to Leh was otherwise pretty uneventful, perhaps because this was the last day of our vacation and we were dreading the mindless grind that lies ahead in Bombay! But we were kept entertained by witty (or rather saucy) one-liners that the Border Roads Organisation had put up on the highway to caution the drivers to take care. One said "Lower your gear, the curve is near" while another was more overt "Be soft on my curves!" But I wonder if Palges or other drivers really get the embedded wit. 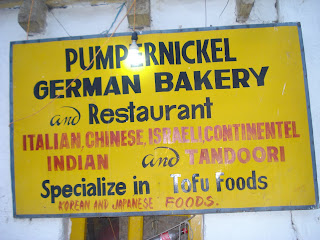 It was nearly 3PM when we reached Leh. Just as I would normally do, I insisted on visiting the famous Pumpernickel German Bakery in the main market of Leh city. The eatery finds a mention in most guidebooks and travel shows. We ordered lasagnas and pastas alongwith tea. The food hardly tasted Italian and was rather cold. I had to get my tomato and olive lasagna reheated. Then when the bill came, to my horror, I found we had been overcharged for the tea. In short, we regretted visiting the Pumpernickel German Bakery, any other place would have been better, by most standards.
After a round of the Tibetan markets, where we picked up a few curios, we retired to the hotel for our last night at Leh.
And the thought lingering on in my mind was that it would be back to the hopeless and mindless grind of the metropolis.
Posted by Rajeev at 10:36 PM