One of the activities many aviation enthusiasts engage themselves in, enthusiastically, are flight reviews. I have been keenly following ones posted by Gavin Leow who video-blogs  about his journeys through East and South East Asia under the alias RvXKaz on his YouTube channel.
Till now I never felt the need to review my inflight experiences, until yesterday when after a long time I did really enjoy a flight, and guess what, it was a flight on the much maligned Air-India.
I was flying on flight AI 610, Air-India's 1910 departure from Bangalore to Mumbai operated on an Airbus A321, a stretched version of the A320.
The aircraft, registered as VT-PPV, was docked at Gate 5 and boarding commenced at 1830.
Google told me that this aircraft, VT-PPV was manufactured in 2009, evidently as part of Air-India's fleet renewal plan.
It was evident from there on that change was happening at Air-India. Our boarding passes were checked by SATS personnel not Air-India staff, who looked quite smart in their attire. 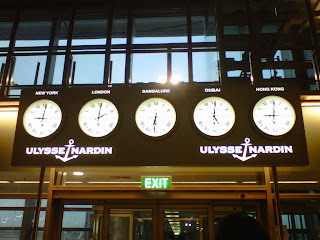 As I proceed towards VT-PPV through Gate 5 on to the aerobridge, I was amazed on how neat and spotless the aircraft looked. That was a welcome change from the very dusty Jet Airways 737s I had seen recently. 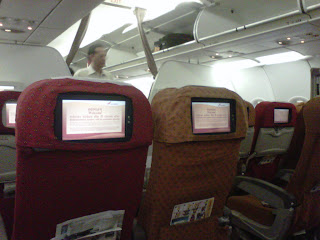 On board, the cabin smelt very fresh. The seats were upholstered in saffron and vermillion - two colours of great significance in Indian mythology! 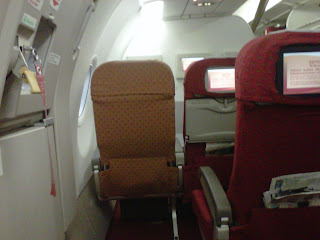 I got seat 8A, an emergency exit seat, which an astounding leg space. Even the other seats had a good leg space, certainly much better than that on Jet Airways. I was given a brief, by 6 feet tall male steward, on how to handle the exit in the event of an emergency.
I must admit that I was pretty impressed by the crew's clinical efficiency. Some of my friends used to obliquely joke about Indian Airlines and Air-India stewardesses calling the aircraft "Aunties' Bar"! Truly, they aren't as young, pretty and sexy as the stewardesses elsewhere, but they sure know their job, their experience shows.
For me, I got my cotton plugs, newspapers and bottle of water without reminders. That's what the high and mighty Jet Airways needs to learn from Air-India a thing or two. Having sexy girls or "chikna" guys serving passengers on board is useless unless they know what service is all about.
Take-off from Bangalore's Runway 27-09 was smooth. Just about that time the IFE was switched on. Somehow, despite the aesthetic appeal of welcome screen, the on-board flight path display was too jarring and bright. I decided to give IFE a miss. 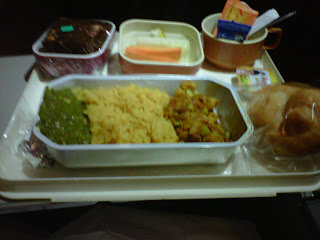 In a few moments, the meal service started - Aunties' work at the Bar! I chose a vegetarian meal - a generous helping of saagwala paneer, aloo gobhi, biryani rice, fresh salad, a dinner roll with butter and large chocolate brownie on a thick mousse base!
The paneer saag was authentic Punjabi, so was the aloo gobhi, while the rice was okay, though certainly not as bad as in Jet Airways, where the rice is somewhat hard and raw, and gives me a tummy ache. The salad was really fresh and juicy. The dinner roll was okay, but really soft and went along very well with butter. The brownie was dark, rich and chocolatey, just the right way! Tea was served by an "Aunty" with a beatific smile, something that is rare up in the air these days!
The approach to Mumbai was smooth. We descended over Vashi, Vikhroli and Ghatkopar in our final approach towards Runway 9-27. All along the approach, my face was glued to the tiny window. From up in the air, Mumbai doesn't look chaotic at all! At night the illuminated city appears as though a thousand diamonds have been scattered all over, an aweinspiring sight!
After the meal was over, on the pretext of visiting the loo, I checked out the galleys and cabin. The load factor was abysmal. Barely half the seats were occupied, which I would imagine would have filled up an Airbus A319 but certainly did not deserve A321 equipment. The galley was neat, the loo was clean and smelt fresh.
Touchdown was amazingly smooth, just like running a knife through softened butter. The reverse thrust which often abused on Jet Airways' Boeing 737s, in their rush to get off the active runway within the stipulated 45 seconds was hardly perceptible on this Airbus beauty, perhaps the smoothness of touchdown can be attributed to the skill and experience of those two souls on the flightdeck to whom we entrust our lives.
Though the flight came to an end, I was thinking that why despite a good product, Air-India is in such deep shit. Undoubtedly, Air-India is honest, the product is neat and slick then why the low load factor?
As logic would suggest a 1810 departure from Bangalore to Mumbai should be full. So is Air-India a pure marketing failure despite having a superior product as compared to Jet Airways? I guess so.
Posted by Rajeev at 11:07 PM

Same here, I find Air-India better than other. The interior are well maintained, super clean, even perform well. If there is an option, I usually prefer AirIndia.
Can't complain about air-hostesses, you either get a clean/performing flight or a few sexy hostesses :-).
Awesome writeup btw.

The total man-made reasoning business sector evaluations are the consequence of our inside and out auxiliary research, essential meetings, and in-house master board audits. ai courses

Great post i must say and thanks for the information.
Data Science Institute in Bangalore

Really nice and interesting post. I was looking for this kind of information and enjoyed reading this one.
Data Science Certification in Bangalore

Fantastic blog extremely good well enjoyed with the incredible informative content which surely activates the learners to gain the enough knowledge. Which in turn makes the readers to explore themselves and involve deeply in to the subject. Wish you to dispatch the similar content successively in future as well.

Really wonderful blog completely enjoyed reading and learning to gain the vast knowledge. Eventually, this blog helps in developing certain skills which in turn helpful in implementing those skills. Thanking the blogger for delivering such a beautiful content and keep posting the contents in upcoming days.

Great appreciation for your work from my end! This article has incredibly and skilfully covered all the negative and positive aspects of the given relevant topic without taking a poignant stance on either of the two sides of the issue.
SAP training in Mumbai
SAP course in Mumbai

Bookmarking is done! This is really one of the most courtesy infuriating articles which I have read in recent times.
SAP training in Kolkata
SAP course in kolkata

i am glad to discover this page : i have to thank you for the time i spent on this especially great reading !! i really liked each part and also bookmarked you for new information on your site.
data science courses in hyderabad

Excellent Blog! I would like to thank for the efforts you have made in writing this post. I am hoping the same best work from you in the future as well. I wanted to thank you for this websites! Thanks for sharing. Great websites!
Data Science Training in Bangalore

I am a new user of this site, so here I saw several articles and posts published on this site, I am more interested in some of them, hope you will provide more information on these topics in your next articles.
data analytics training in bangalore

I just got to this amazing site not long ago. I was actually captured with the piece of resources you have got here. Big thumbs up for making such wonderful blog page!
data analytics course in bangalore

Great post i must say and thanks for the information. Education is definitely a sticky subject. However, is still among the leading topics of our time. I appreciate your post and look forward to more.
Data Science Course in Bangalore

Extremely overall quite fascinating post. I was searching for this sort of data and delighted in perusing this one. Continue posting. A debt of gratitude is in order for sharing. data analytics course in delhi

I was just examining through the web looking for certain information and ran over your blog.It shows how well you understand this subject. Bookmarked this page, will return for extra. data science course in vadodara

I really appreciate the kind of topics you post here. Thanks for sharing us a great information that is actually helpful. Good day!
full stack developer course with placement