Be Healthy, Be Earthy - Eat Italian!

Great food need not be complicated at all.
That's what I realised when I saw David Rocco's Dolce Vita on television that other weekend. David Rocco, a Canadian actor and producer of Italian descent, very nicely brings out the treasures that his native Italy has to offer.
On this particular show, David Rocco made an exciting, yet simple pasta - spaghetti al limone, a side dish - zucchine alla scapece and a lemony tiramisu.
That particular show left me inspired enough to rush to Lokhandwala market, the next morning, to immediately buy the ingredients. Barely able to control my excitement and anticipation that had clouded my attention span all that while, the tingle in my tummy grew intense with each passing moment till dinner time.
The spaghetti went in for a boil till done, al dente! 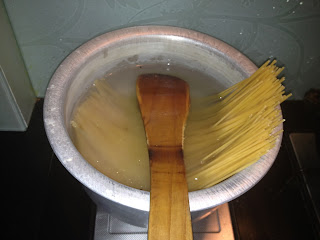 Garlic cloves were pounded into a thick paste, lime juice was extracted and extra virgin olive oil was mixed in. Then lime zest was mixed in.
While my spaghetti was getting done, I shallow fried up slices of zucchini. That's when I remembered that David had mentioned that scapece can be made with aubergines as well - aubergines is the vegetable that  both Neeti and I equally and absolutely adore. So melanzane zucchine alla scapece it had to be, my variant of David Rocco's! After the zucchini slices were fried, went in the aubergines!
By then the pasta was done. To stop the intense heat from seering through the spaghetti threads, I put in a generous 20-odd ice cubes into the spaghetti.
By then my lovely aubergines had turned marvelously golden (Man, the aroma was something!) and they too were put into the dish alongwith the fried zucchinis. I mixed in pounded garlic, mint leaves with the fried aubergines and zucchinis, sprinkled a dash of salt and then went in a tablespoon of white vinegar! 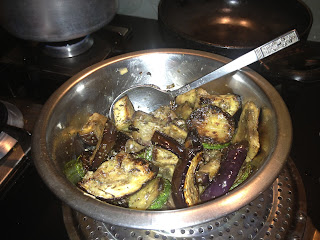 Now, the spaghetti was done - the water was drained. The spaghetti was then mixed with the garlic-olive oil-lime juice-lime zest emulsion. A vigorous mixing ensured every single strand was coated with the aromatic emulsion. A good measure of parmigiano or grated parmesan was sprinkled, alongwith freshly chopped parsley leaves. 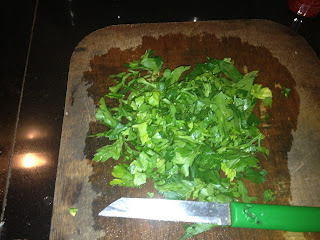 And we were good to go, the spaghetti al limone was good to eat!
To be honest, Neeti devoured the scapece, but found the spaghetti a bit blandish - perhaps thinly sliced peppers would have given it an exciting crunch! That's a version I have to try next! 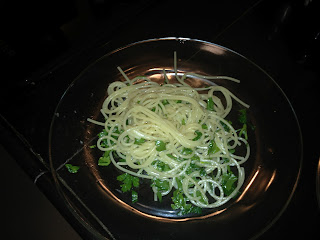 But undoubtedly, with the goodness of lime, garlic and olive oil, the spaghetti al limone and scapece made for healthy, earthy Italian dinner!
Posted by Rajeev at 6:37 AM

The contents are really good…
Rosesandgifts.com