Chaat-ing Around On The Streets of Delhi!

Today when we were out shopping for our weekly groceries at Star Bazaar at the Crystal Point Mall in Andheri West, we saw a chaat counter as we exited. Naturally Neeti and I were tempted, tempted beyond any imaginable control!
Before we could think rationally, we ordered a plate of paani puris (or gol gappas, as we North Indians call them) - six of them shared between the two of us.
Was it the same thing that we have so loved? No way!
Agreed High Point in Lokhandwala Market is far better than what we had at Star Bazaar, but nothing matches the gol gappas you get in the North.
My first introduction to the chaat kind of stuff happened in 1984 at Hauz Khas, in Delhi. It was a "sinful" treat that my good old granny, or Ammi as we lovingly used to call her, used to give us, me, Neelima and our cousins, off and on. Too much of it was bad, we were told - it could make our throats go bad and give us a temperature too. That used to keep us from pestering her most of the times, but most of the times, she would lovingly lead us to Shiv Stores, a neighbourhood restaurant known for its South Indian fare, chaats and sweets.
I loved the dahi papdi chaat a delectable melange of crunchy papdi, sweet and sour tamarind chutney and cool curd. Thus began our love affair with this sinful North Indian concoction.
Times have changed quite a lot. Today the owners of Shiv Stores have closed their restaurant business and have gotten into the much lucrative business of property redevelopment. In place of the erstwhile Shiv Stores, a swanky new new office has come up from where their redevelopment business is managed.
Changing times have not changed my liking for these sinful delights. Any trip to Delhi is an event to look forward to for one significant reason - having chaat, gol gappas and tikkis. 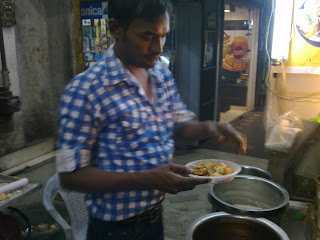 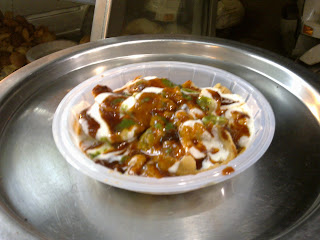 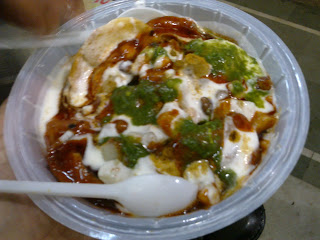 It is always a treat to see the vendors behind their elaborately illuminated counters picking up the gols, putting a bit of boiled chickpea, mashed potato, onion, tamarind chutney and dipping in the spicy paani! These guys do it so stylishly - it has to be seen to be believed. 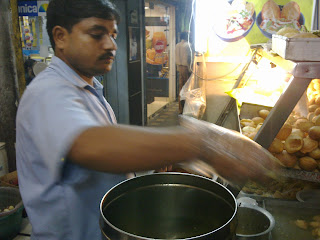 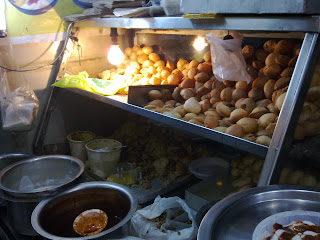 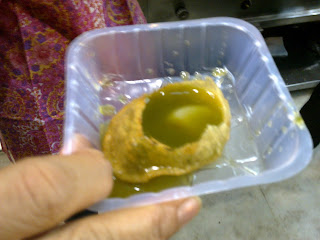 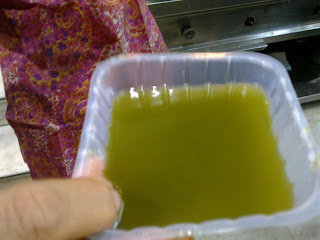 And girls go crazy on the gol gappas. It's sheer madness when they have all this. They shriek with joy and plead with the vendor, "Bhaiyya, ek aur!" or "Thoda saunth dena!".
Unfortunately Mumbai's Gujju-ised, sev-laced chaat variants are no match for the very magical authentic Delhi chaat. People in Mumbai go crazy about the stuff you get at Elco's on Hill Road in Bandra or at High Point in Lokhandwala. These poor souls, in Mumbai, haven't really tasted the real thing. The Mumbai variants lack the robustness in flavour that the Delhi version has. Plus the besan sev spoils the whole fun.
The tikki chaat in Delhi is another yummy delight. The aroma that wafts from the wide iron skillet with the sound of fat tikkis sizzling on it is simply magical. And then when it's time to eat, imagine two fat crispy tikkis sitting on your plate with mint and tamarind chutneys and bit of beaten curd. The Mumbai version of the tikki chaat, Ragda Pattice, comes a poor 10th, let alone second, third, fourth or whatever for various reasons. I personally find the name hard hitting and not appealing at all. Secondly, the size of the tikkis make them look anemic like pygmies, when compared with the Delhi ones! Thirdly the chutneys lack the robustness and character that chutneys in the North have. 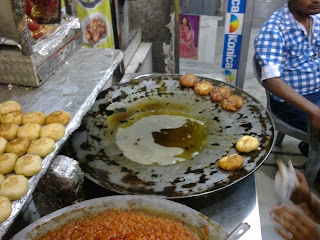 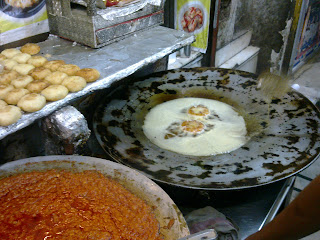 Make no mistake - this is no rant about Mumbai. But somehow for any true bloodied, self respecting North Indian, its hard to accept Mumbai's Gujju-ised variants as palatable. Having chaat in Mumbai is as bad as having pav-bhaaji in Delhi (for Delhi chaat eateries pav-bhaaji is an absolute must on the menu!). It's just not the real thing. That does explain why for my first 2-weeks in Mumbai I had pav-bhaaji every single night! 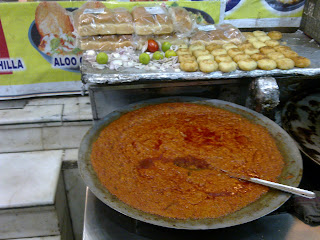 And yes, I forgot the aloo chaat that is ubiquitous in Connaught Place - that's another yummy heartwarming treat for a cold winter day!

Probably, the best place to have all this is in Old Delhi, in and around Chandni Chowk, where certain shops have a built a sterling reputation vending chaats for centuries!
As I am writing this, I am already plotting my next move - a visit to Old Delhi, to tingle my palate, to go chaat-ing around on the streets of Delhi!
Posted by Rajeev at 4:37 PM