The latest edition of Bombaypolis Moments is back... this time, I feature South Mumbai which once was the hub of all activity in the city...
I start at Ballard Estate, which is an old European style business district situated in south Mumbai located between Chhatrapati Shivaji Terminus (formerly Victoria Terminus) and the 'Fort' area of South Mumbai. Ballard Estate is home to shipping companies and the headquarters of the Mumbai Port Trust at the Port House.
The history of Ballard Estate goes back nearly 100 years. The Bombay Port Trust reclaimed 22 acres of land at Ballard Estate between 1914 and 1918, using material excavated from the Alexandra Docks for filling. This reclamation was named after  Colonel J. A. Ballard, a founder of the port.
George Wittet designed the buildings here, imposing a uniformity of style and design through the use of European Renaissance facades. I am told that the buildings here are built in the Edwardian neoclassical architecture, it has a "London-like feel" to it.
In its heydays, Ballard Estate was the commercial hub, with sailors and traders coming in from far and wide and the Grand Hotel stands testimony to that colourful history. The hotel was the preferred abode of the early 1900s. But with time, the centre of gravity of commercial activity shifted to Nariman Point and then, later, up north...
But for me, Ballard Estate is synonymous with Britannia & Co., the legendary Irani eatery famous for its Zereskh Pulao or berry pulao as we know it.... 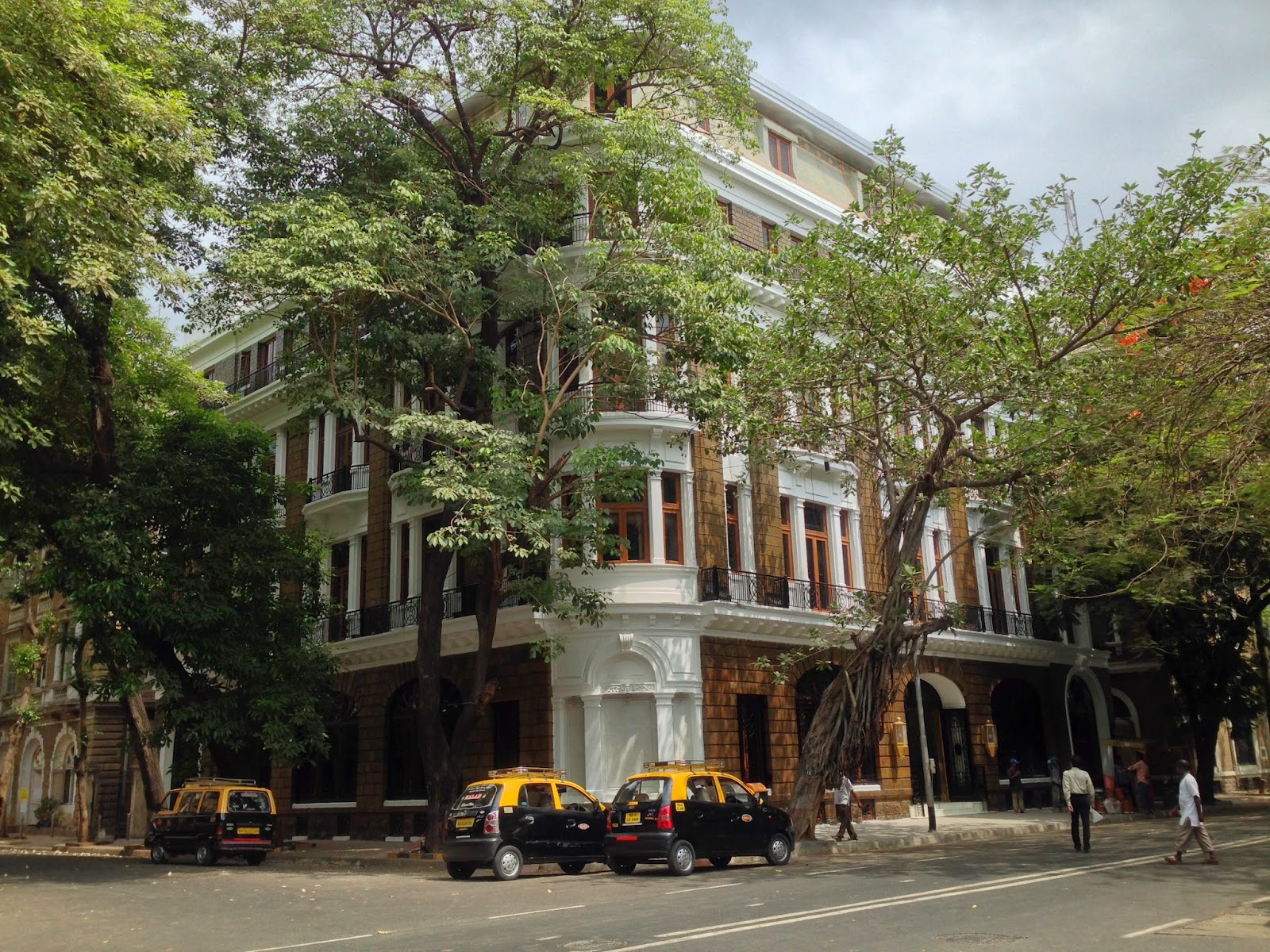 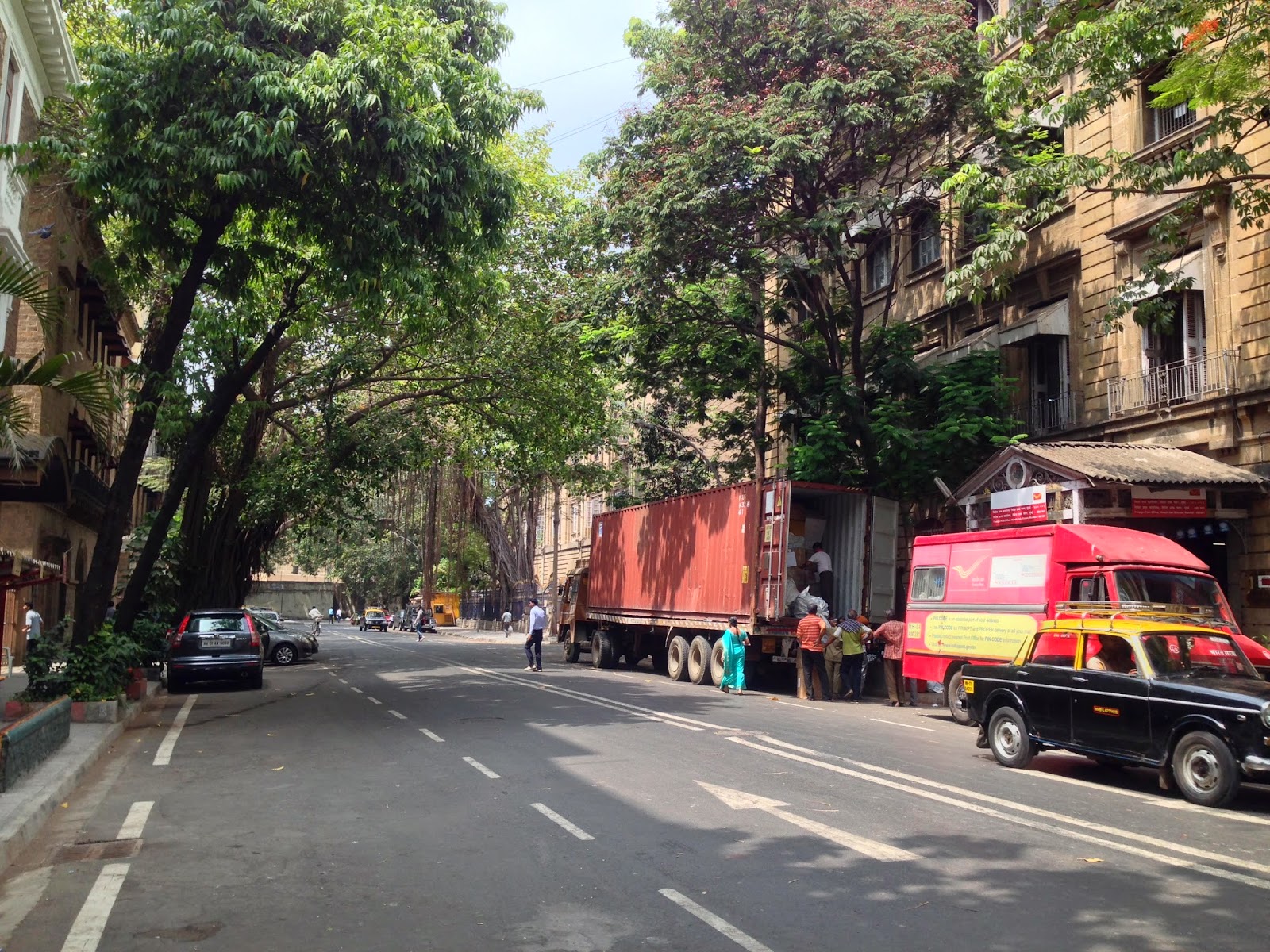 A leafy lane at Ballard Estate... 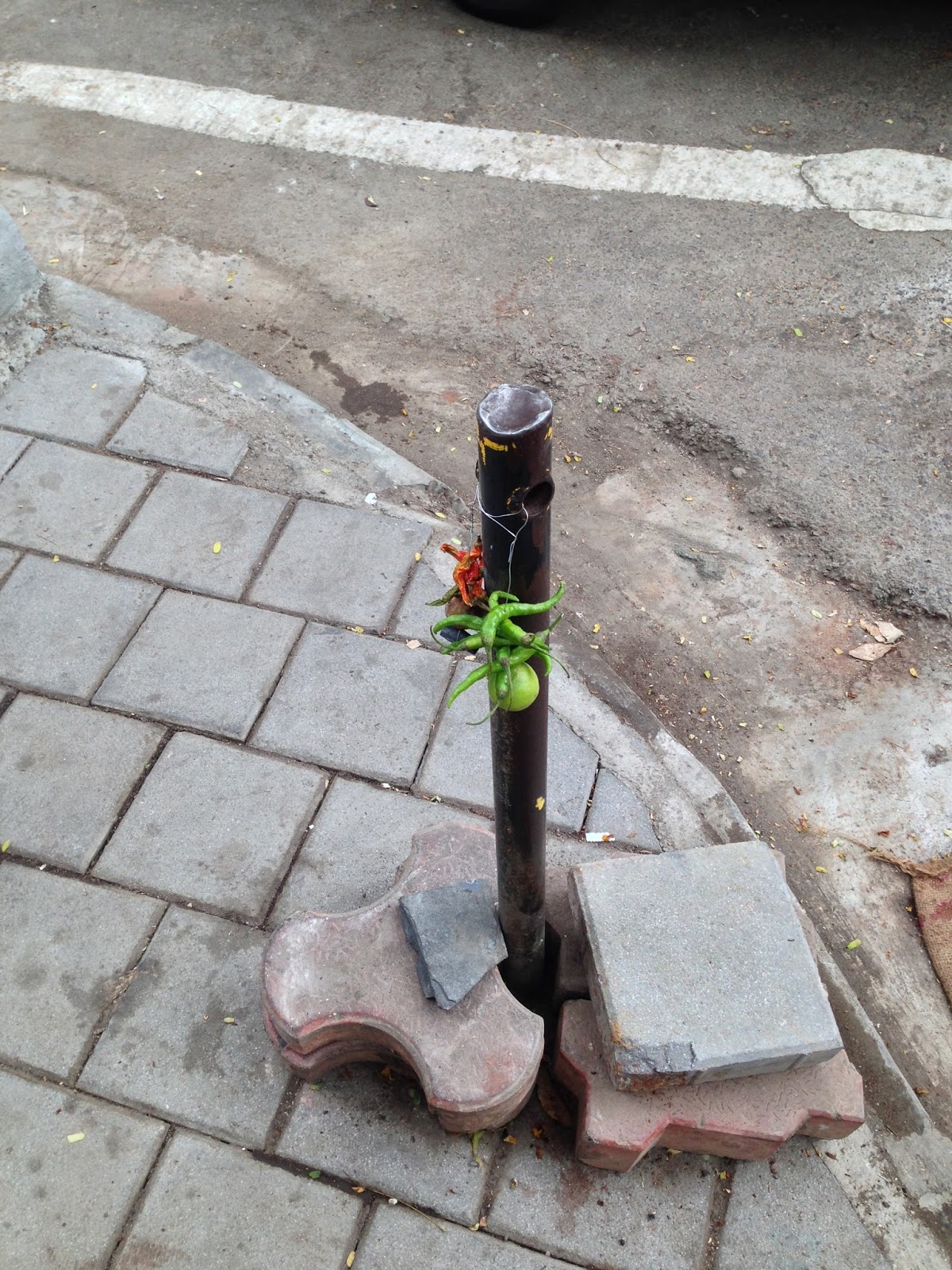 Warding off the spirits that get in bad luck! 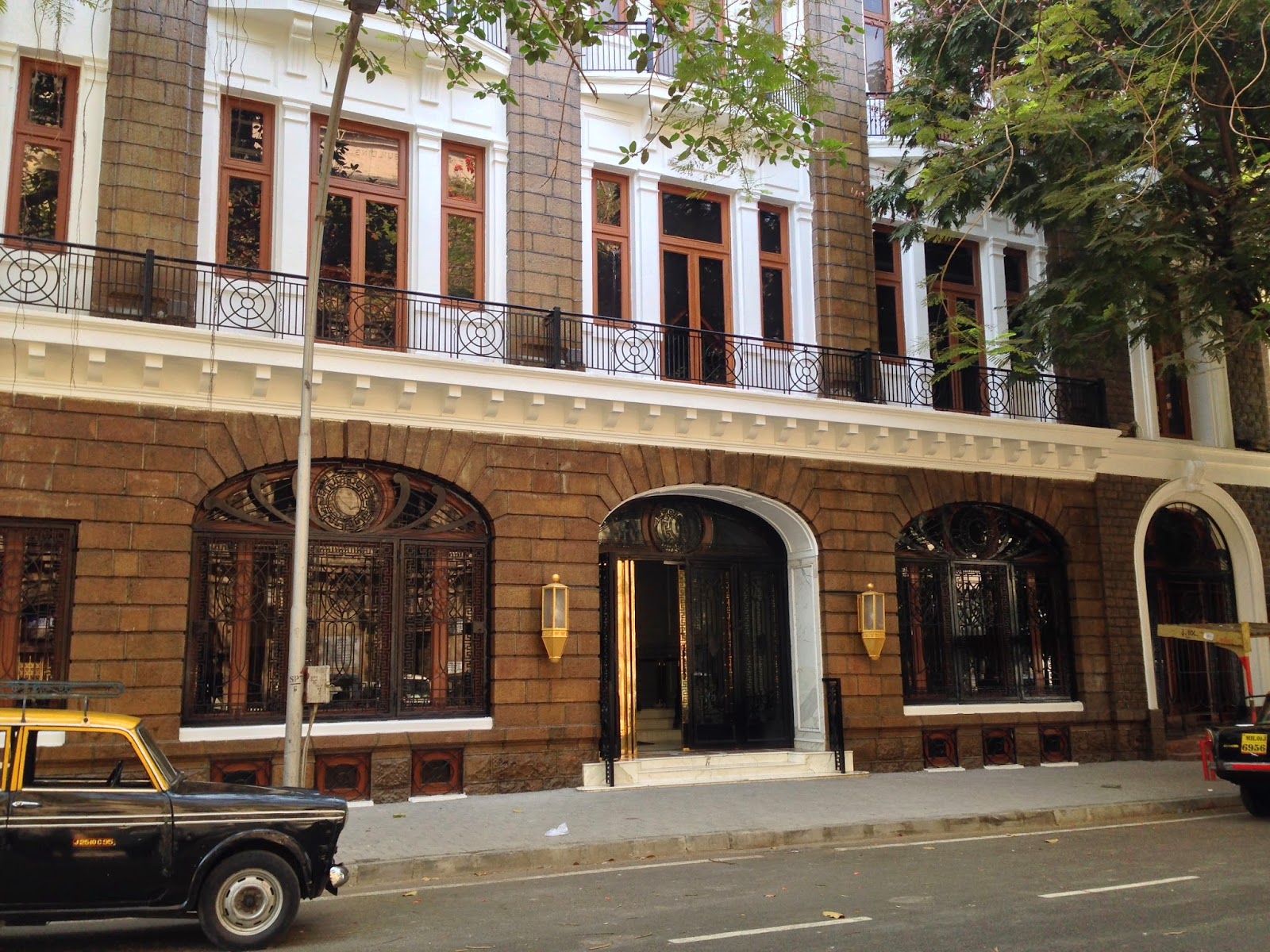 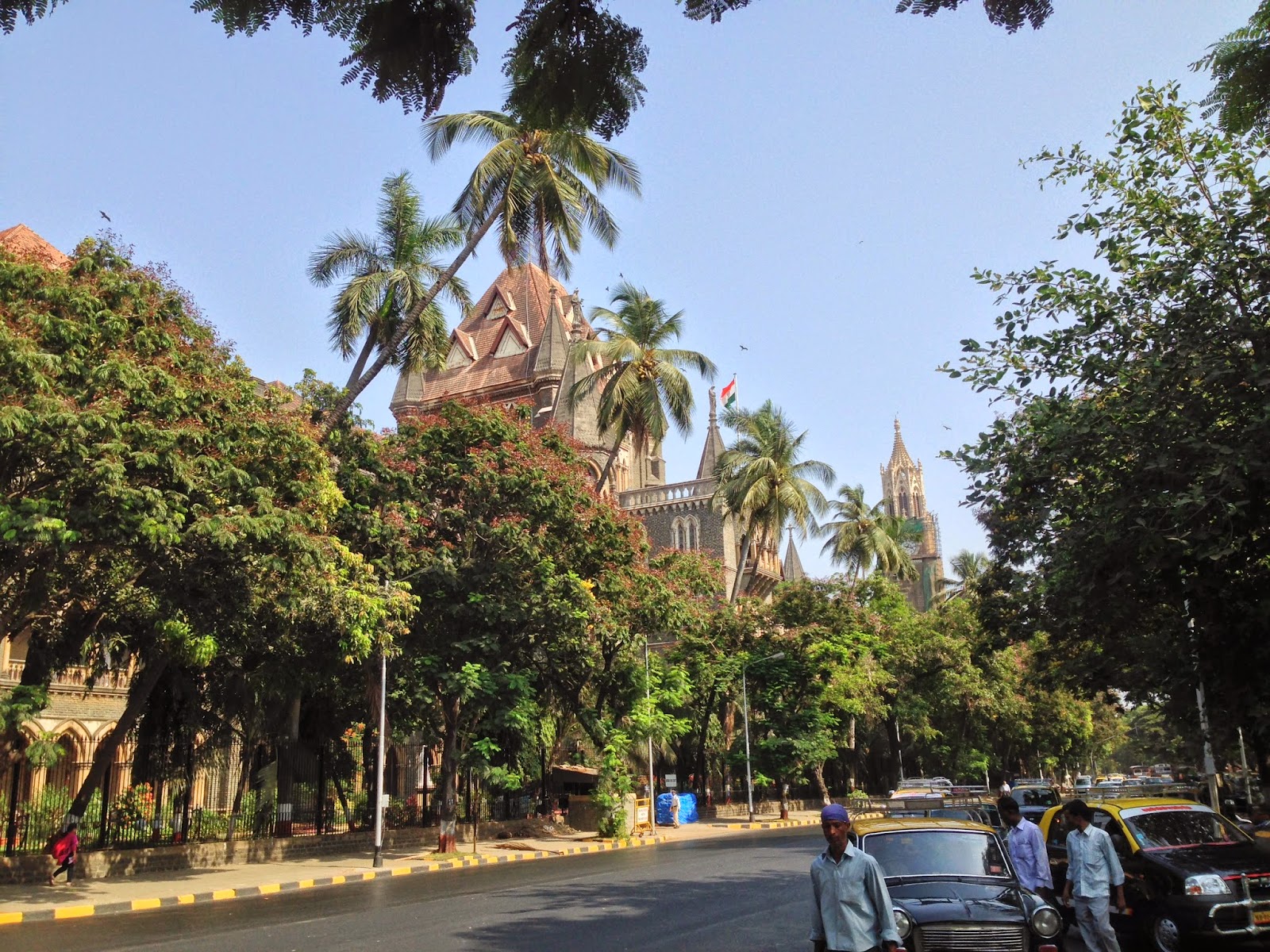 I walked down from Ballard Estate to Churchgate and passed by relics of the past - Bombay High Court! 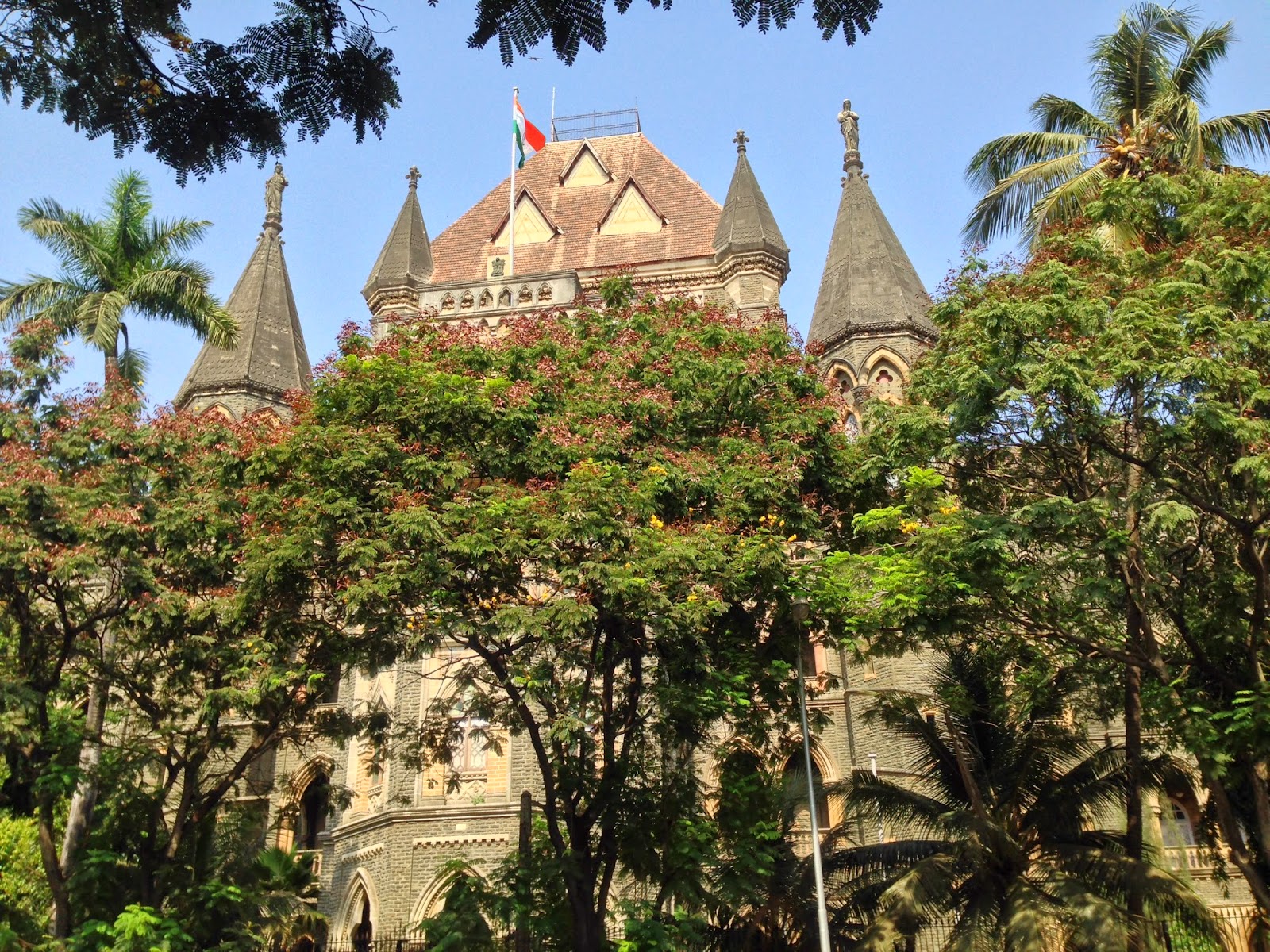 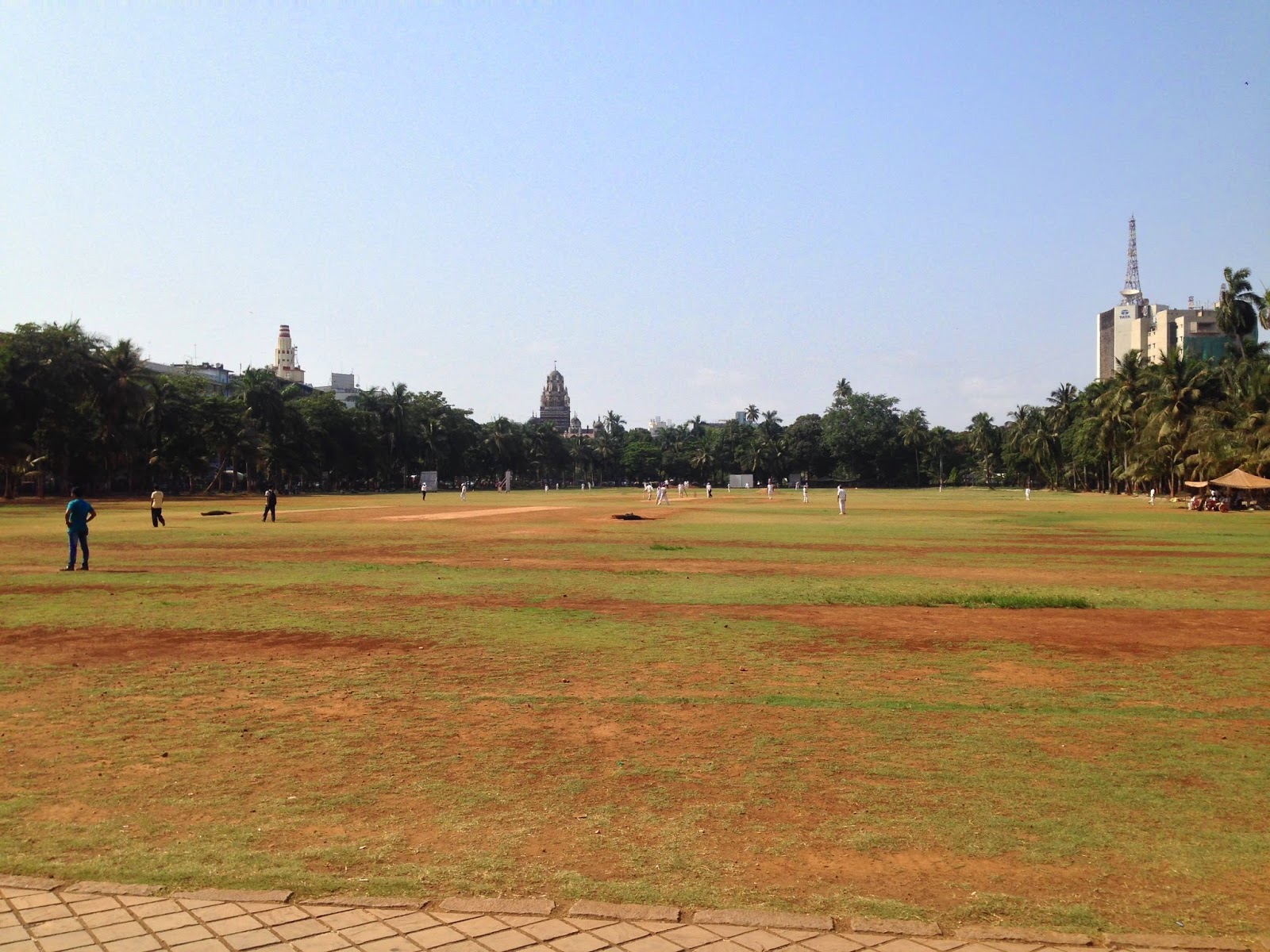 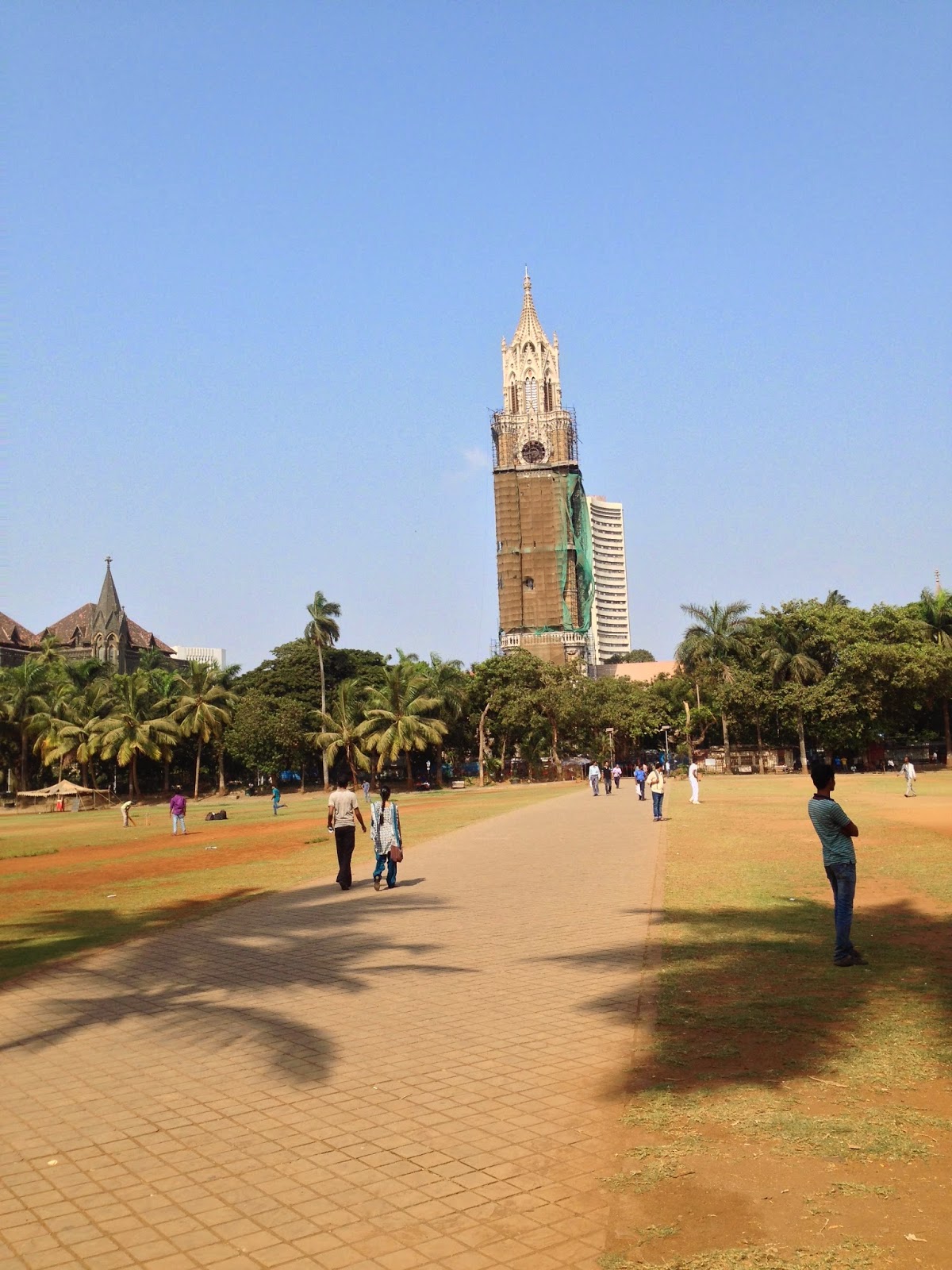 The Rajabai Clock Tower with the Bombay Stock Exchange behind it...
The Rajabi Clock Tower was designed by Sir George Gilbert Scott, an English architect, who modelled it on the Elizabeth Tower, the clock tower of the British Parliament in London.
The foundation stone of the Tower was laid on March 1, 1869 and construction was completed in November 1878. The construction cost came to Rs. 200,000, a princely sum in those days. This entire cost was paid for by Premchand Roychand, a stock broker, who founded the Bombay Stock Exchange, on the condition that the tower be named after his mother Rajabai.
Premchand Roychand's mother was blind and as a staunch follower of Jain religion she was supposed to consume her dinner before evening. The evening bell of the tower helped her to know the time without anyone's help. 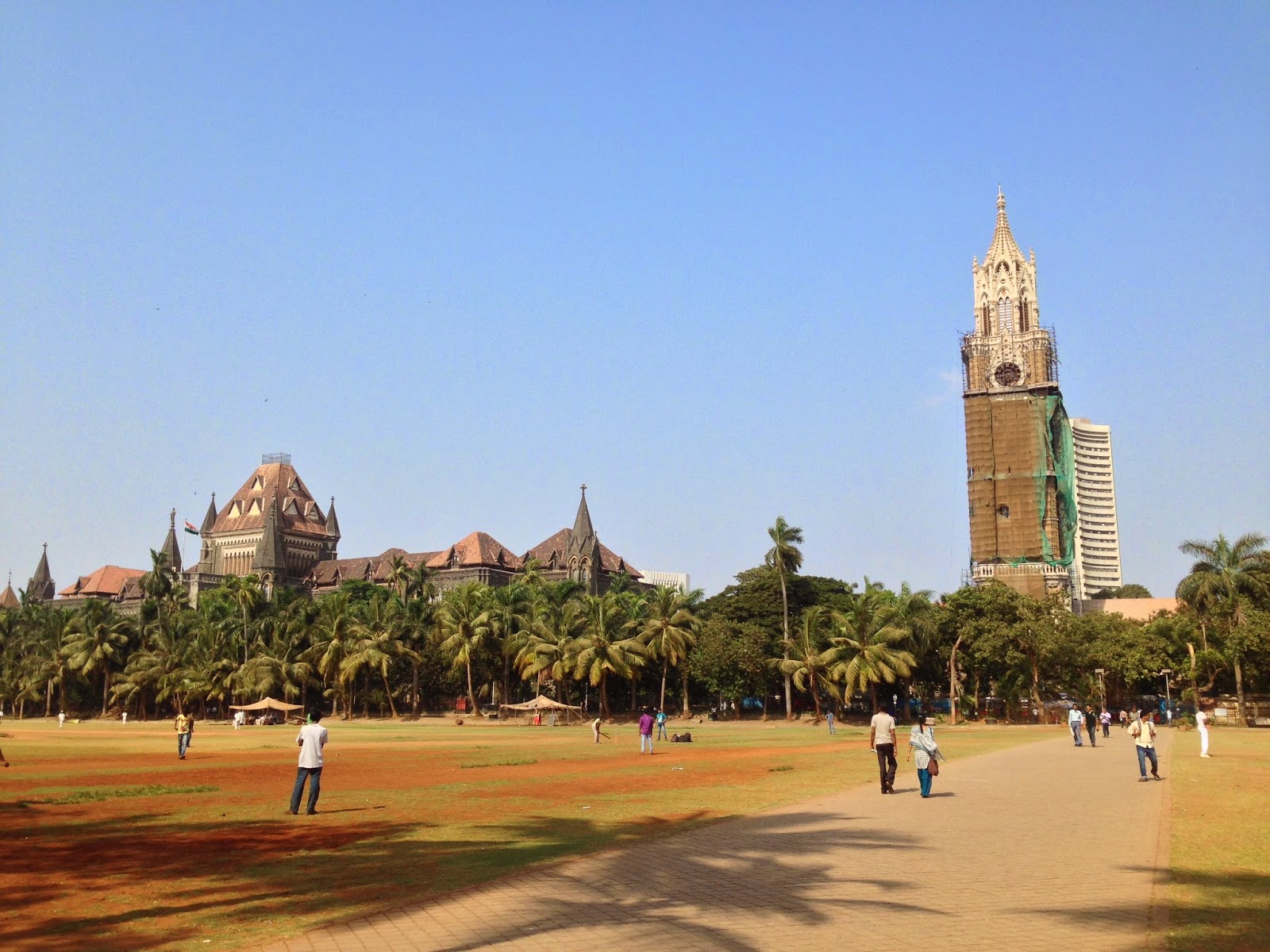 The Bombay High Court, the Rajabai Tower and the Bombay Stock Exchange behind it....

A panoramic view of the Maidan... 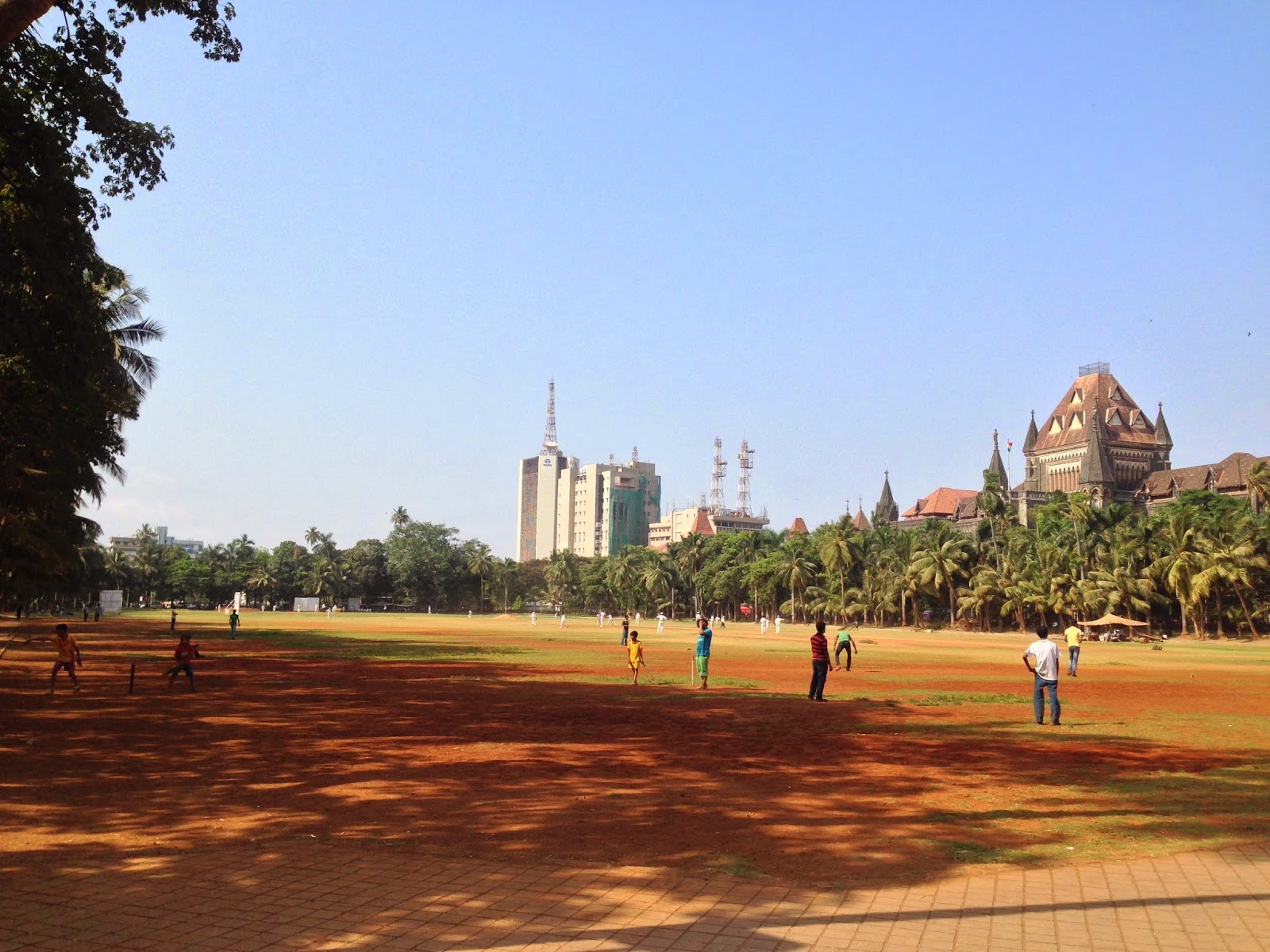 As times change, the old buildings thrive with modern eyesores coming up.... but Bombaypolis playfully lives on, here with a game of cricket!