If you are in Shibuya, you can't miss hearing the delightful and heartwarming story of the loyal dog, Hachiko.
Hachiko was a golden brown Akita, a Japanese breed. Hachiko was born on November 10, 1923 at a farm located in Ōdate. In 1924, he was adopted by Hidesaburō Ueno, an agriculture professor at the Tokyo Imperial University, and was brought to live in Shibuya, Tokyo.
Ueno would commute daily to work, and Hachikō would leave the house to greet him at the end of each day at the nearby Shibuya Station. The pair continued the daily routine until May 21, 1925, when Ueno did not return. The professor had suffered a cerebral hemorrhage, while he was giving a lecture, and died without ever returning to the train station in which Hachikō waited.
Each day, for the next nine years, nine months and fifteen days, Hachikō awaited Ueno's return, appearing precisely when the train was due at the station.
Hachikō attracted the attention of other commuters. Many of the people who frequented the Shibuya train station had seen Hachikō and Professor Ueno together each day. After an article was written about him in the Asahi Shimbun on October 4, 1932, Hachikō became a national sensation - people started to bring Hachikō treats and food to nourish him during his wait.
Teachers and parents used Hachikō's vigil as an example for children to follow. A well-known Japanese artist rendered a sculpture of the dog, and throughout the country, a new awareness of the Akita breed grew. Hachikō's legendary faithfulness became a national symbol of loyalty, particularly to the person and the imperial establishment.
Hachikō died on March 8, 1935 at the age of 11. His body was found on a street in Shibuya. His remains were cremated and his ashes were buried in the Aoyama Cemetery, right beside his beloved master. Hachikō's fur, which was preserved after his death, was stuffed and mounted and is currently on permanent display at the National Science Museum of Japan in Ueno, Tokyo. 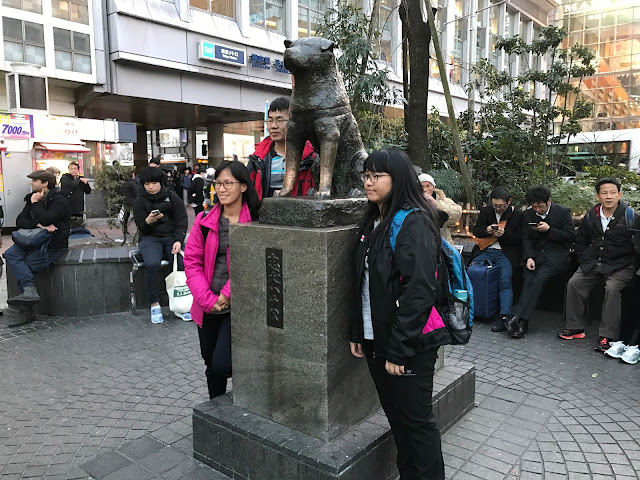 In April 1934, Hachikō's bronze statue was sculpted by Teru Ando was erected at Shibuya Station. The statue was recycled for the war effort during the Second World War. In 1948, Teru Ando's son Takeshi made a second statue.
The Shibuya Station entrance near this statue is named "Hachikō-guchi", meaning "The Hachikō Entrance/Exit", and is one of station's five exits.
And that new statue, immortalizing Hachikō is a landmark and an attraction for tourists like us. We were really pleased and humbled to have paid our respects to the loyal Hachikō...