A series of photos, spontaneous mobile grabs, collected over my past few years in Bombay.... 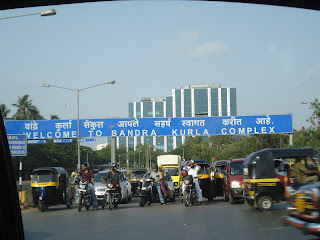 Not only does Bandra Kurla Complex suffers 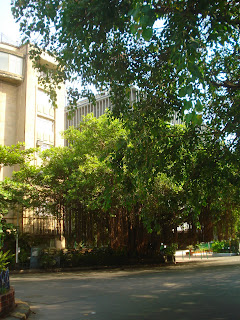 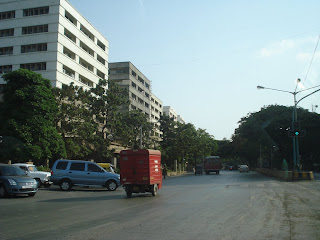 m a lack of "culture", it looks like a dusty dump, with swanky outcrops, that seem totally out of place.... That's much unlike town, which does have a reasonable green cover, like the evocative banyan tree at the junction of J. Tata Road and H.T. Parekh Marg, at Churchgate.....


But why complain? I am told Andheri-Kurla Road is worse... it's chaotic, crazy, noisy, dusty, you name it, it's all there.... 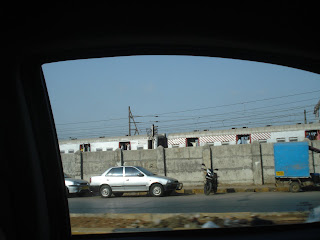 While the commuting lifeline remains the train, some of us are brave enough to drive long swanky cars to work. I guess that would be something like a slow suicide, the traffic kills you....


But commuting by a 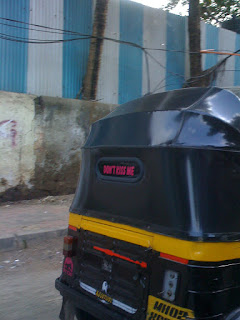 utorickshaws has its interesting moments. Not only do you have to struggle to get an auto to take you from point to point, you also run the risk of getting a bad back as the autos race over the famed crater-ridden roads, which our holier-than-thou BMC would care to repair.


But when you come across graffiti like this on autos, you forget the trouble and laugh it out... But I wonder if the autowallah doesn't want to be kissed or is he warning other drivers to be careful and mot "kiss" his auto? 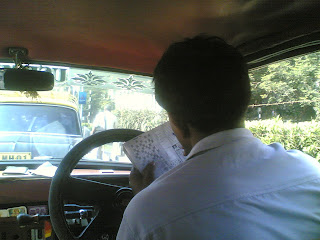 ame across an interesting taxi driver, who was playing a crossword while the cab had stopped on a traffic signal. That was real inspiring...


Having India's busiest airport, the CSI Airport is an excellent place for airliner-spotting. Besides the biggies operating out of CSI Airport, one also gets to spot exciting carriers from exotic places like Kenya, South Africa, Mauritius, Seychelles, etc. etc. 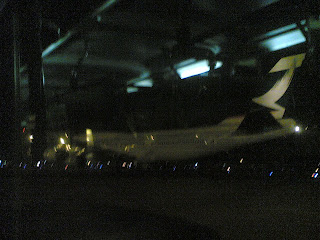 CSI airport rarely sleeps, but with a slowdown, fewer Indians are taking to the , one is getting to see lesser and lesser crowds at the airport. Sights like this have become common now..... 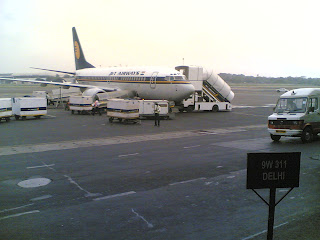 Landing into CSI Airport has always been an interesting experience. The sight of the mighty Western Ghats is amazing, like this shot. This looks even better in the Monsoons, with a carpet of green covering the mountains. But this heavenly sight soon gives way to the repelling squalor of the slums. While the world-over and closer home, in Delhi, the political focus is on beautification of cities, in Bombay, the elected leaders thrive on slums. 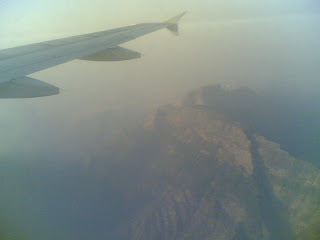 Talking of food, Bombay has quite a few decent options for exotic fare, but does anything match up with a sinful Vada-Pav? Guess not... 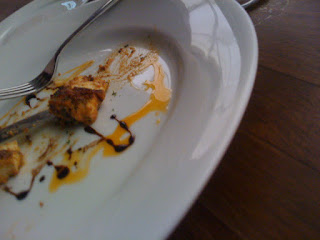 Being on the coast, gives an additional dimension to the skyline of the city. The beauty of Marine Drive at night is matchless. Similarly, nothing beats the sunset at the beach...


I hope to continue this blog in the near future with interesting pictures and anecdotes from this city - the metropolis of Bombay, Bombaypolis..... 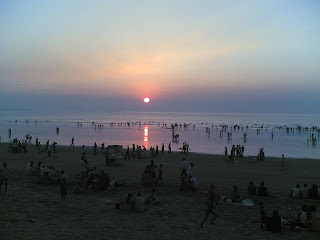