Did this Advertisement Foretell 9/11?

A few days back, my sister, Neelima, sent me an email forward which had a copy of an old advertisement, of Pakistan's flag carrier, PIA, from the 1970s.
The commercial advertised the shortest flight time to New York as 16 hours 30 minutes, via Orly, Paris. The advertisement showed the World Trade Center Twin Towers and the shadow of a distinguishable Boeing 747. Evidently, the Jumbo Jet was flying in to World Trade Center.
The email forward described the PIA advertisement as "visionary advertisement".
The email froward also quoted a media visionary, Marshall McLuhan, who apparently described advertising as the greatest art form of the 20th century. Though this is the first time I heard of Marshall McLuhan, I agree with him. Some advertising campaigns do fit that bill - the Amul Butter campaigns, since the mid-1970s, featuring the lovable Amul girl is a notable one.
Another notable campaign was Bobby Kooka's Air India Maharajah - a lovable, pot-bellied character with a handlebar moustache and a round turbaned head. 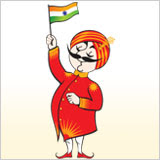 The Maharajah defined Air India for decades with tongue in cheek campaigns showcasing their various destinations.
The email further went on to say that art at its most significant is a Distant Early Warning System that can always be relied on to tell the old culture what is beginning to happen to it. That is a bit debatable.
Let's take the example of Bollywood. In the 1980s and till the mid-1990s, Bollywood was all blood and gore. But our society did not degenerate to those lows.
But for sure, the PIA advertisement did in a very significant way, foretell the future.
Posted by Rajeev at 9:03 PM