The writing had been on the wall for a few years now, we all knew it but never wanted to admit that it would come, come so fast.
But when I read the article that appeared in the Los Angeles Times, I knew that the time had come. The era of the Boeing 747, that began in 1970, was finally coming to an end.
The Los Angeles Times article spoke about how the first commercial Boeing 747, which was introduced by Pan Am for its trans-Atlantic routes (it is said that Pan Am's Juan Trippe wanted an aircraft with double the capacity of a Boeing 707 which prompted Boeing to develop the Jumbo!), was being junked in Seoul, South Korea and the strong emotions the demolition was generating. 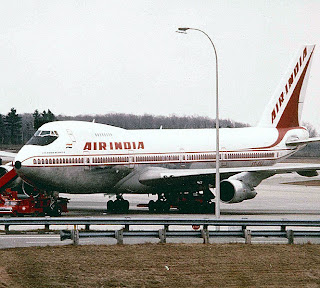 My love affair with the Boeing 747 began at New Delhi's Palam airport way back in 1981, long before Terminal 2 was constructed.
We had gone to see off Papa. It was a summer evening and there stood a magnificent Air India Boeing 747 Jumbo Jet, shining in the warm North Indian sun!
The glistening hump of the 747 will always remain an enduring image in my mind!
From then on, I always used to ask Papa and Mummy when we would travel in a 747.
As I grew older, my love affair with the 747 became even more intense.
I recall landing at Sahar, Bombay, in 1984, and seeing neatly parked 747s of Air India and Pan Am. The Air India 747s looked regal in their red liveries with magnificent palace motifs adorning the windows! Truly, they were "Palaces in the Sky", fit only for Maharajahs! The Pan Am 747s looked modern and very American with the blue livery and and the blue globe on the tail.
Years passed and I still did not get travel in a 747. I had to be satisfied with Boeing 707s, 727s, 737s, Airbus A300s, McDonnell Douglas DC 10s and Hawker Siddeley 748s.
During these years, I kept looking at airline advertisements in magazines proudly showing off their 747s in all their splendor and used to wonder when I would get to fly in the gentle jumbo of the skies.
During those years, Papa once got me an Air India ticket jacket (those were the days of paper ticket booklets, ticket jackets and sticker labels!), which had a full pic of a 747 on a runway. Nothing excited more than seeing a 747.
In 1985, we were flying out of Bombay. Because of a technical snag, our flight got delayed after we had boarded. Before I knew it, I had fallen asleep. When I woke, we were already airborne and Papa told me that there was an Air France 747 on the runway, which had passed us by and he had tried to wake me up but..... I was crestfallen and sullen for the rest of the flight as though I had been rejected by my first crush!
My next encounter with a 747 was at Lusaka International Airport in 1987 - as our DC 10 was throttling towards takeoff velocity, I saw a 747 of the now defunct French airline, Union des Transports Aériens parked at a remote bay. That was enough to intoxicate me for the rest of the flight to Bombay. And when we landed at Sahar, Bombay, I walked past our "Palace in the Sky" - Air India's 747s always made me proud!
I got my first real chance in 1998, when Papa and I flew from Bombay to Delhi in Air India's 747 red eye flight as I had to catch my MBA entrance interview in Delhi the next morning. As we moved towards the aerobridge, the sight of the classic hump excited me a lot! Yes, I had finally made it.
Years moved by. Countless journeys on the Airbus A320 ensued, and then I moved to Bombay in 2004.
Those days, Air India used to offer discounted fares on its red eye flights on Bombay - Delhi sector that suited my budget. And I was too happy to take those flights. Afterall, most of them were 747s. A 747 had always been there for me when I needed it the most. It took me home when Ammi was breathing her last few breaths, took me to meet Neeti the first time and for our engagement as well!
And nothing beats the sight of a 747 taking off and I cannot help but wonder how the hell can something as massive as this gentle beast lift off into the heavens!
And then about 2-3 years back, news came in that Air India was retiring the 747s from active service on premier routes, only to be used for VIP service or for Islamic pilgrimages to Saudi Arabia. The 747s were replaced by Boeing 777s and Airbus A330s in their fleet, but these aircraft certainly don't fit the "Palace in the Sky" description, for sure, though they maybe quieter and more efficient.
Air India is not alone - the world over, the 747 alongwith jetliners of its era are getting junked, for newer and quieter machines, that claim to be more economical! A slightly dated list on Wikipedia suggests this.
They say that the Airbus A380 is a worthy successor of the 747. To me, the A380 looks like nothing more than a fat sausage. It does not have the sexiness that the 747 did, the grandeur, the appeal that the 747 did. Who knows whether it would emerge as the queen of the skies or not.
Today as you roll down Bombay's 9-27 runway, you can see a couple of Air India 747s parked at the Kalina hangars, ready to be mothballed. It's sad to see them die that way.
Boeing, I am told, is developing a new generation 747-8 to succeed the 747-400 range. But sadly the passenger version got orders only from Lufthansa and Korean Airlines, though it may be a success in its freighter avataar.
And when I read this article in the Los Angeles Times, I knew that the era that Juan Trippe ushered into this world, which was brought to India by JRD Tata and Air India was ending!
I will always miss the heady feeling of sitting in a 747 and feeling its power. Adieu, may the Palace of the Skies rest in peace!
Posted by Rajeev at 10:28 PM