Diwali is undoubtedly a special occasion, not only because its a joyous event on the Hindu calender, but also because it is one day when all of us, at home, put our heart ad soul into a special dinner that stays alive in our hearts, in our minds and on our tongues for one year, till the next Diwali comes!
This Diwali dinner was another special occasion that has gotten etched indelibly in our memories.
While shopping for the Diwali dinner, at Godrej Nature's Basket, I came across the first strawberries of the season. Next I came across the long green chilly peppers, the ones that go into the delectable mirchi ka salan.
Without question, all that had to bought for the feast.
On Diwali morning, Neeti reminded me that I had to do the maa-ki-daal. The daal had to be immediately soaked in water to ensure ease of cooking later in the day. At noon, I started preparing the making the daal, multi-stage cooking style, the way I had learnt from my Mom, who had perfected this Amritsari style over the last 30-odd years!
The daal was boiled for nearly an hour, without any spices. After the daal was three-fourths cooked, in went whole spices - cardamom, cloves, cinnamon, peppercorns, alongwith finely chopped ginger, garlic, onions, tomatoes. That was boiled for another 10 minutes, after which turmeric powder, salt and a tablespoon of mustard oil were added, and was left to simmer on low heat for next 90 minutes.
While the daal was simmering away to gooey thick consistency, Neeti assumed the role of Captain on the Hyderabadi  mirchi ka salan, and I gladly played the role of her First Officer! Peanuts were roasted, so were cumin seeds, sesame seeds, nigella seeds, which were roasted on a skillet and ground to a fine consistency alongwith fresh coconut. As I ground the aromatic spices, Neeti went about seering the chilly peppers in an extremely hot pan. 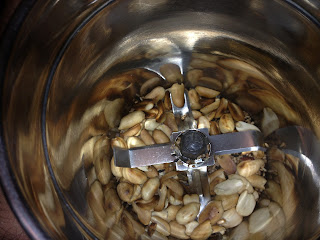 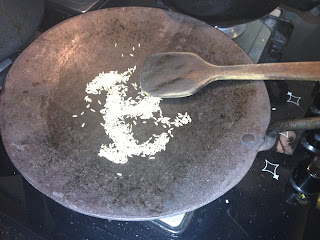 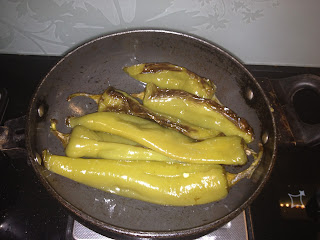 Neeti then skillfully brought it all together in her best ever Hyderabadi mirchi ka salan, better than what even a professional would do in Hyderabad.
This time around, for the Diwali puja prasad, we didn't pick up any sweets from the market. Instead, Neeti made one of her specialities - strawberry cream, with the strawberries I had picked up the day before. 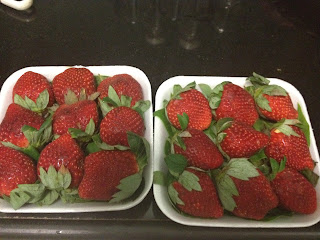 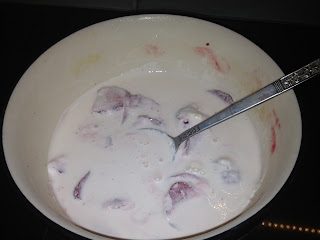 Our cook chipped in - she made mattar-paneer and methi rotis. And we topped it off with digging out the delicious bhallas that Neeti's mom had brought in with her when she came here to Mumbai last month. The bhallas were soaked in warm water for 20 minutes and then were added to beaten curd, alongwith a yummy, tangy tamarind chutney.
Just before settling in for dinner, the maa ki daal was given a special tadka or seasoning of asafoetida, cumin, onions, ginger, garlic, pepper and coriander powder!
And what a dinner that was, a remarkable, yummy Diwali candlelight dinner! 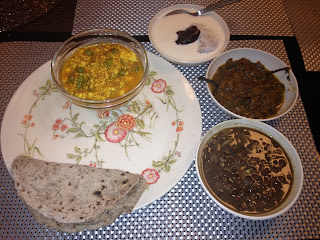