Ushering the New Year, 2013 had to be a special occasion. And what better way than to try out our version of Coq Au Vin, a classic French preparation that had captivated me for over 2 months and about which I had written last November on this blog.
The preparation began a day earlier with bunching up herbs - fennel, thyme, chives, tarragon and rosemary in a  bouquet garni. 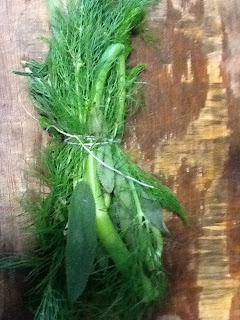 Next, chicken pieces alongwith diced carrots, shallots and fennel were mixed in a bowl togeher with the bouquet garni. In India, getting poulet de Bresse was out question, so I chose Godrej Real Good chicken . And though Coq Au Vin is supposed to be made from a rooster, I chose to ignore the gender of the bird I bought! A teaspoon of sugar and some salt was added. Next came a generous helping of red wine to marinate the chicken. No Burgundy here.... I chose the red wine I could lay my hands on! 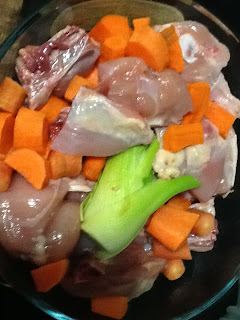 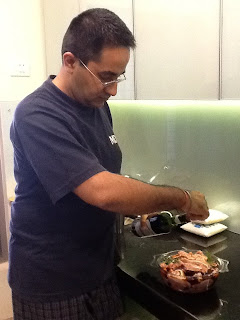 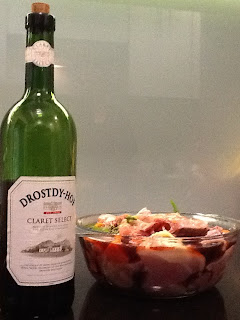 Next, a few pomfrets were marinated alongwith carrots, ringed onions and carrots in olive oil and red wine and herbs for an Iberian fish braise! 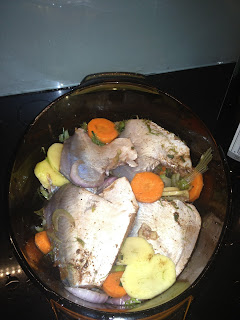 The next day, New Year's Eve, fish braise and the Coq Au Vin was prepared. 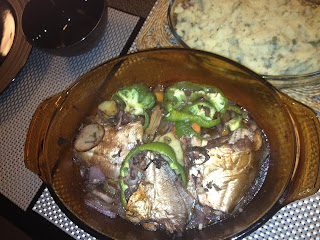 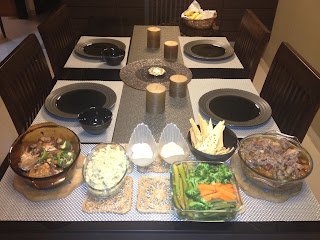 Accopanying the Coq Au Vin and fish braise were herbed potato mash, crunchy steamed vegetables, rye bread and Lavache - an Armenian flatbread. Two dips - hung yogurt and wasabi-mayonnaise went along with the bread!
That was our way of celebrating the end of 2012 and the beginning of 2013!
Bonne année! & ¡Feliz Año Nuevo!