After a long time, our creative juices we in free flow, and yes the digestive juices too!
After having a ham and pumpkin risotto last Saturday, we were having an uncontrollable urge to try our hand at a risotto at home - the risotto so far was an impenetrable fortress for us.
But it was the D-day today!
We chose our own style..... we cooked up a pack of Maggi's mushroom soup with a cube of chicken stock. As the soup thickened, we added a cup of milk for extra flavour and creaminess.
Separately, some rice soaked for 2 hours and a small broccoli was blanched. A pack of button mushrooms was cleaned and chopped.
Now it was time to put all together. In a wok, onions and garlic were sauteed in olive oil. As the onions turned translucent, we added the blanched broccoli and then after about 5 minutes, in went the mushrooms. The rice which had been soaked for over 2 hours was drained and was added to the wok and was throughly mixed with the vegetables. Then we added a good measure of Chantilli cabernet sauvignon. In the next 5 minutes, the rice absorbed the goodness of the wine. After a good stir, the thickened milky mushroom soup was poured into the wok. We left the wok covered for 20 minutes, leaving the broth to thicken further to sticky consistency.
And then the magic happened. As we uncovered the wok, the heady aromas said a great deal - the impenetrable fortress had been conquered and our flag was fluttering on top of it.
The risotto was poured onto the plates and was garnished with halved cherry tomatoes and sprigs of holy basil. 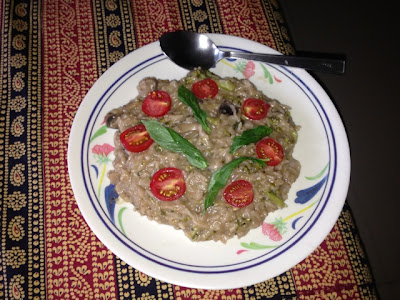 And as Neeti took the first bite, I knew our first risotto was a delectable success!
Posted by Rajeev at 7:18 PM

Congrats. Risotto can become quite tricky to make but glad u got it right :)

Excellent post.
I was checking constantly this blog and I am impressed!
PS4 Save Wizard Crack allows you to play more than 1000 PS4 games. The software is available for free, but it is also available with an updated version.
PS4 Save Wizard Crack has a modern interface. A USB device can be used to copy data from a Playstation 4. Your computer needs to be copied and pasted.
Bitdefender Total Security Crack is among the most comprehensive antivirus programs to detect and eliminate malware. There is a myriad of powerful algorithms, with a myriad of options to safeguard your data from malicious ransomware, Trojans, malware, and other dangerous viruses.

Extremely helpful information particularly the last part.
I care for such information much.
PS4 Save Wizard Crack can be played games with this keygen. Because most games don’t have rules, cheat tools allow players to access predetermined rules in some games.
PS4 Save Wizard Crack cheat makes playing PS4 games easier. Our entire focus is on PlayStation 4 games. An employee can quit a position by resigning.
VorpX Crack Free Download to easily transfer 3D videos, photos, and games. This software allows you to play everything, it is easy to use even by a beginner.