A few days back, chance had it that I happened to come across a website, GourmetItUp.com, that claimed to offer culinary experiences in the best of the restaurants the city has to offer.
I just had to, had to experience the "experience" they promised and that did have to be what's considered to be the Holy Grail in the culinary world, French cuisine. And as luck had it, GourmetItUp.com had an offer going on at the Le Pain Quotidien in Bandra Kurla Complex's tony office space, Maker Maxity.
The drive to BKC was smooth, given it is a Saturday. The bright afternoon sun had a warm and uplifting feel and it was the perfect time to savour a gourmet experience! 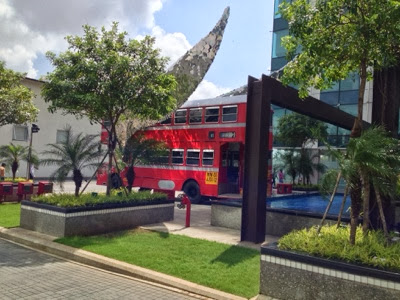 Just as we were being ushered into Le Pain Quotidien, I was struck by a BEST double decker on display.... a dying breed, once these double deckers were the icons of Bombay, as Mumbai was known then!
Times change, names changes and icons fade.... 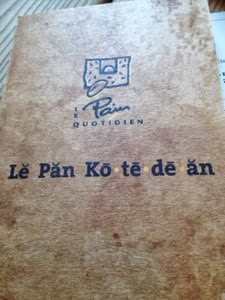 Ah, well, the menu gives me the correct pronunciation! 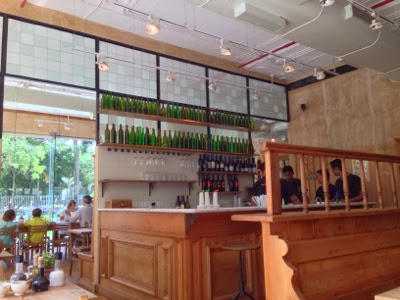 The rush was a bit low and waiters took a few moments to share a laugh! 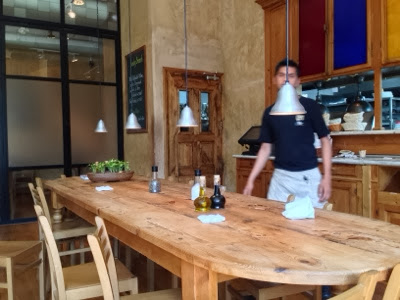 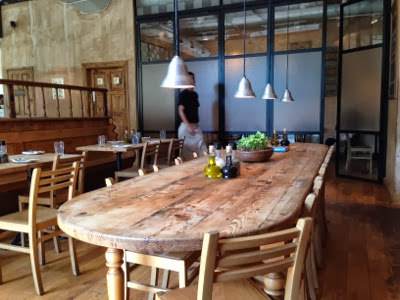 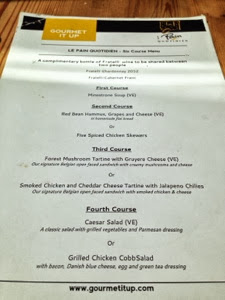 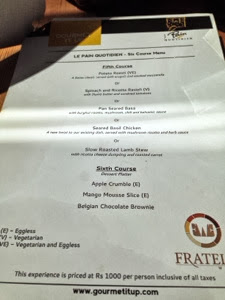 And our menu comes! 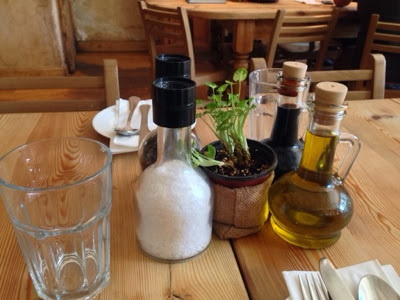 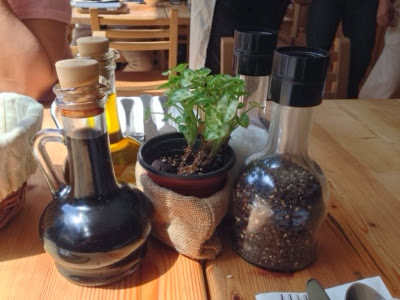 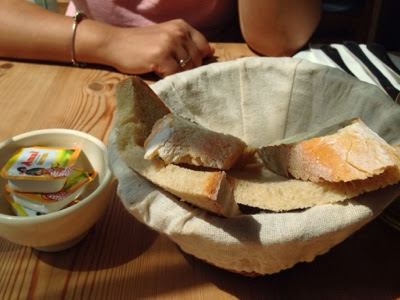 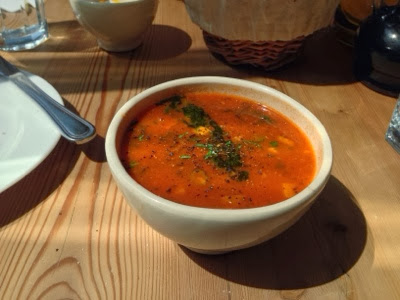 And there come our first course, a thick broth minestrone soup with classical French breads!
The minestrone was hearty and uplifting! 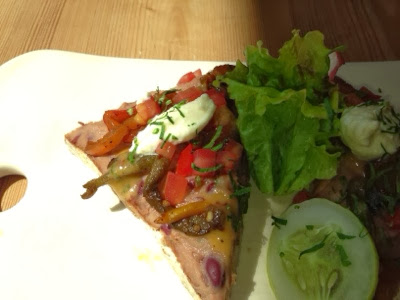 And then came our second course - Neeti's vegetarian option was red bean hummus with grapes and cheese served on bread.... 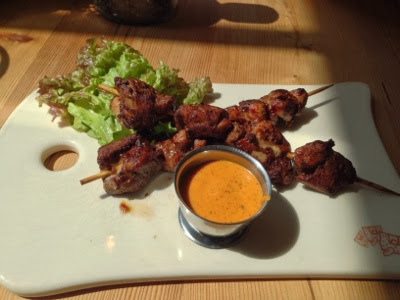 But for me, it had to be five spice chicken skewers with tomato aioli!
The chicken was chewy and flavourful - just the way I like it! 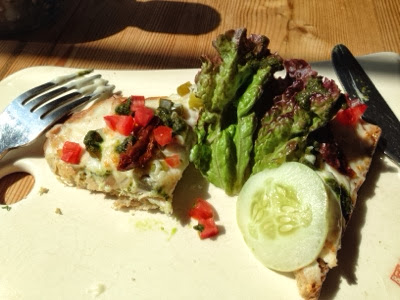 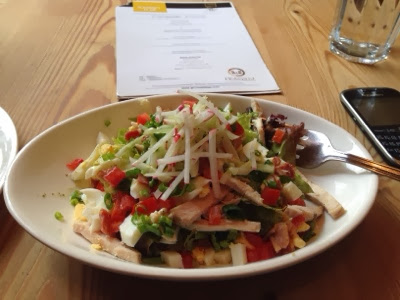 The salad course began - for me it was grilled chicken salad with bits of bacon, egg and Danish blue cheese.
The waiter was considerate enough to caution me that the salad has bacon....
Little did he know that anything that crawls, that walks, that flies or that swims is kosher for me....
The salad was nice and crunchy! 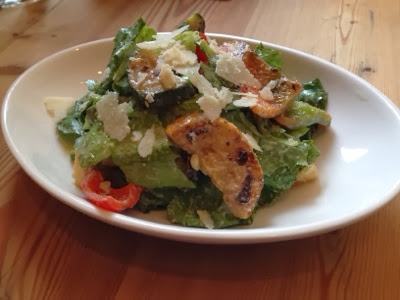 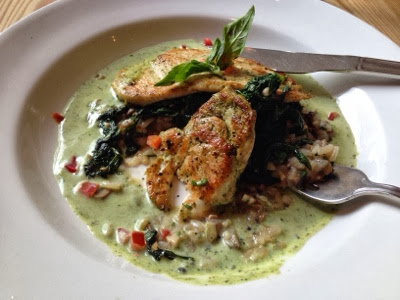 And then it was time for the pièce de résistance - I went in for the seared basil chicken served on a bed of mushroom risotto with a very earthy herb sauce....
The chicken was succulent and juicy, the sauce was was lip-smacking! 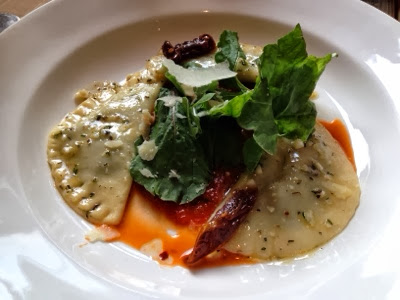 Neeti chose spinach and ricotta ravioli with sun-dried tomatoes!
I had a bite and it was  mmmmm heavenly! 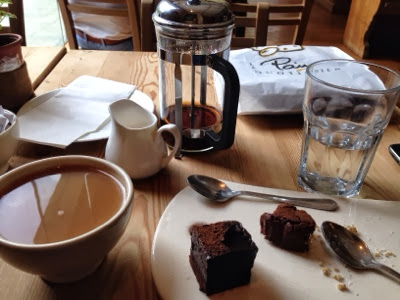 Next was our dessert platter.... with some tea!
Indeed this is a Saturday afternoon well spent! 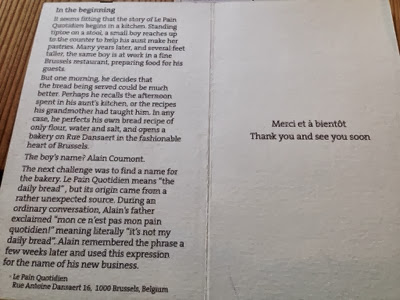 And as we paid our bill, I got to read the story of LPQ!

Founded by Alain Coumont, the first Le Pain Quotidien opened on 26 October 1990 at 16 rue Danseart in Brussels, Belgium. As a young chef, Alain was dissatisfied with the quality of bread available in Brussels, so he began making his own, mixing flour, water and salt into the familiar loaves of his childhood - enduring memories of his grandmom making the daily bread.
He furnished the first LPQ with cabinets scoured from antique stores and a large table purchased at a local flea market - that was to become the first Le Pain Quotidien’s many communal tables.


I truly enjoyed the LPQ experience - the staff was friendly, the food was yum, the portions were filling, which is, well, becoming a rarity! All I can say now is merci LPQ and GourmetItUp!

Disclaimer: I paid for this meal and this is an authentic account of a satisfied foodie! Burp!
Posted by Rajeev at 2:50 PM

nice you can book your deal at hotels near mumbai airport

nice you can have a space at Restaurants in South Delhi