Conquering fear is the most daunting task that a human faces. Like everyone else, I too have had my share of fears.
I came face to face with one such fear about 5 years back, in September 2007. My colleagues and I traveled to Panchgani for an outbound outdoor team building programme. The programme was enjoyable - insightful lectures were interspersed with outdoor games and activities. The weather was also great, it was misty all throughout with frequent showers.
One morning during, we all woke up early and headed out at 7 AM on the Panchgani - Mahabaleshwar road. We stopped at a scenic spot and our trainers, Atul Mathur and Vinita Saxena, led us through a pretty meadow. There was a slight drizzle and as the Monsoon was retreating, the clouds were pretty low and almost touched ground level giving the impression that we were walking through dense mist. The meadow itself was quite pretty - lush green with lots of wild flowers in full bloom. 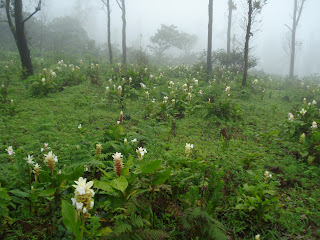 Soon we reached our destination - the edge of a cliff, from where our entire team was to absail down - absailing is the controlled descent down a rock face using a rope. This technique is used by mountaineers to descend when a cliff or slope is too steep. (Absailing is also commonly known as as rappelling.)
Since the weather wasn't too conducive - it was far too misty up on the cliff - we chose to wait and instead went in for breakfast - sandwiches and steaming hot tea. 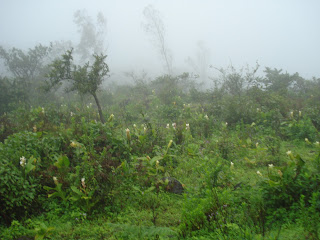 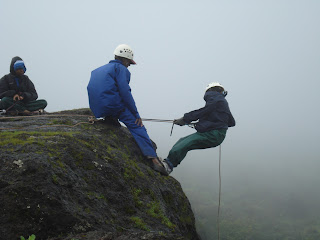 After about an hour the mist started thinning out and we all got into our protective gear - helmets, harnesses and gloves. There were a few of us who were genuinely scared as the cliff was about 30-40 meters high. In sometime the activity started. After keenly observing a couple of colleagues rappell down, it was my turn to go.
I was given my final instructions by the guides, but I kind of chickened out on reaching the edge of the cliff, after seeing how high the cliff was. Then Atul and Vinita came in with their persuasive best, with all kinds of motivational statements to egg me to go down. That did not help - I was trembling with fear, for my dear life.
After about 10 minutes of encouragement from the absailing team, I decided to give it a shot. But I could not compartmentalise the fear. I took two steps and looked down. Man that was scary. The loss of concentration made me lose my balance and I slipped. And I was caught on camera to add salt to the injury! 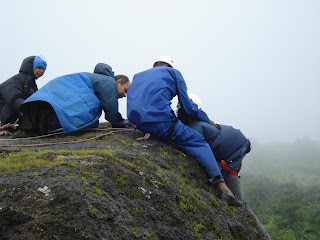 After hanging for a couple of seconds, with a zillion glances down below, I decided I had had enough of this activity and shouted out for me to be lowered down. I was relieved when I reached terra firma.
But then all my colleagues successfully completed the task despite all the fear they had. That made me think where I went wrong. All these years, I lived with that embarrassment and hurt, somewhere deep inside, that I could not do it.
But as fate would have it, the chance came again last Friday, when again I alongwith some colleagues were at Lonavala for a training programme. I was in two minds - should I or shouldn't I give it a try.
It wasn't the same me - a freakish accident in 2010 had left me with a weak right knee. And then I had that old crazy fear of being on the edge! So when we started for the location the old Mumbai-Pune Highway from where we were to absail down, I said to myself, "Oh man! Not again!" and I was thinking of all kinds of alibis to get out of this exercise.
But then as we reached the site, as though a devil had instantaneously possessed me, a force inside me said "Just Do It!". The activity started. In sometime, I put on the gear and requested for knee supports, just in case. I told the activity co-ordinator, Bipin and his team, that I had failed once and I didn't want to fail again. I looked around from the cliff - the view was pretty, but I consciously avoided looking straight down. 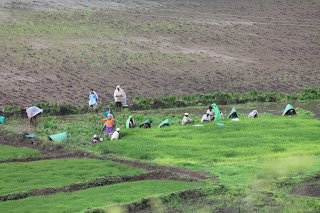 Somewhere inside me, the fear was lurking around. But an unknown force was telling me to move on and ignore the fear. So it was - I memorised all the instructions and lowered myself down gently, but with a greater degree of confidence that I couldn't muster way back in 2007. Half-way down, I was asked to pause and pose for photographs. That's when it dawned upon me that it wasn't so tough afterall! 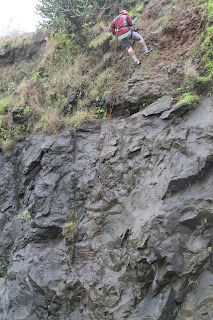 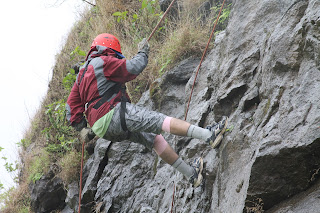 I completed the descent in about 5 minutes and was speechless for a while. I was all smiles and wanted to pat myself that I had done it, done it successfully this time. It felt incredibly light! 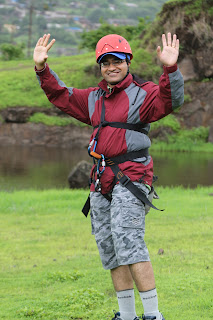 I thanked Bipin and his teammates for their support, but I knew - if that inner force did not prevail upon my fear I would have never made it this time.
This has been one of the biggest lessons I have learnt so far - tell yourself that you can do it, moderate the fear, calm the nerves and just take the first step -- there are high chances you'll be through! That's key to conquering fear!
Posted by Rajeev at 1:29 AM