Talking of food, I am reminded of one incident where an African family friend once told my mother that Indian food is far too complicated.
I remembered this thought today morning and my mind started thinking of how food preparation gets complex and complicated as one travels East. Last week, in my blog post I Don't Want Nirvana! I Want Great Food, Always! I had written of how food has evolved over the ages, and how the necessity to consume offal during the middle-ages has brought about the art of charcuterie of today.
During the week, I read about a traditional Icelandic delicacy, kæstur hákarl which is nothing but fermented, putrefied shark meat, with a strong whiff of ammonia. It is believed that the technique involved in preparing kæstur hákarl came about in the ancient times, when locals had to rely on preserved shark meat during the long winter months. Even the most compulsive foodies of all times - Anthony Bourdain and Andrew Zimmern found it offensive. Anthony Bourdain called it "the single worst, most disgusting and terrible tasting thing" he had ever eaten. Zimmern described the smell as reminding him of "some of the most horrific things I've ever breathed in my life," but said the taste was not nearly as bad as the smell. Nonetheless, he did note that hákarl was "hardcore food" and "not for beginners."
There are other equally offensive Icelandic delicacies that I cannot just wait to devour. Svið is one of such exotic preparations. Svið is made from a sheep's head cut into half, de-furred, and boiled with the brain removed and cured in lactic acid and served with with mashed potatoes and mashed turnip. It is believed that Svið originally arose at a time when people could not afford to let any part of a slaughtered animal go to waste, much like the way offal was consumed in continental Europe.
Svið along with kæstur hákarl form an important part of þorramatur, a traditional Icelandic buffet which also has many other "offensive" delicacies.
How interesting! I can't wait to get to Iceland!
Icelandic food was intimidating for the Gods of food - Bourdain and Zimmern. Imagine how intimidating such exotic stuff can get for the uninitiated like us. But simply put, the stuff that we consider exotic is actually really basic, and is born out of necessity. Preparation is simple, flavourings and seasonings used are really basic.
Last week I wrote about the world's largest food market at Rungis, Paris, which all kinds of food - game, veal, rabbits, wild boar, etc. Now this market had its origins in the 10th century. The market was then located in the centre of Paris, in a huge, 10-hectare area named Les Halles. It became too small to accommodate all of the business demand, and, in 1969, the market was transferred to the suburbs.
The point is simple - for over 10 centuries, the market at Les Halles served the needs of Paris well, with freshest local produce - simple uncomplicated stuff that fed Frenchmen. (Perhaps, in a tribute to the French traditions, there is a restaurant in New York City called Brasserie Les Halles, which is the "homebase" of Anthony Bourdain)
Moving eastwards, towards Germany, food is still simpler than the French. The most well known of the Germanic cuisine is sauerkraut - fermented cabbage, which is popularly had with wursts - German sausages and cold-cuts. I was enough to have sauerkraut with wurst once, when my sister Neelima returned from a trip to Frankfurt with a can of sauerkraut and wurst. I was overjoyed! I enjoyed the delights with local rye bread, in true German style!
The Arabs and Africans too have very simple cuisine. Middle Eastern fare like the hummus, falafel, tabouleh, kibbeh and babaghanoush are a bit bit more advanced than the Arabian Kabsa that I had written about last week - fill it all up in a pot and cook, without any sophistication.
Down south, in Africa, food is exciting but very very basic and uncomplicated. The countries that I am familiar with had some lovely food. Uganda, my homeland, had a staple called matoke - large plantains which are steamed and served with greens, grilled or fried meat or chicken and spicy peanut sauce. I faintly remember the taste - it was great. In fact, as a toddler, I used to love having matoke from my ayah, Theresa's lunch!
Zambia had its own staple - Nshima - a porridge made from ground maize (corn) flour known locally as mealie-meal! Nshima used to have a very starchy and grainy texture and went very well with greens and kidney bean gravies. Needless to say their roast meats were also juicy and tasty. In fact I used to look forward to having Nshima at wedding parties or as guests at our Zambian friends' homes.
African food is unique in the sense that it is not only uncomplicated and basic, but it also tastes of natural goodness. The natural flavours are not masked by an overdose of spices that we are so used to in other parts of the world.
In the Orient, in places and Thailand and Japan, for instance, food preparation is no less than a work of art. TLC televised a show on Thai food recently, where they visited the royal kitchens. The food being prepared was delicate, beautiful and colourful. The chefs were all skillful, the show mentioned that the chefs underwent years of training to be considered good enough to work in the royal kitchens.
The Japanese too are a breed apart. I once had sushi at a place here in Mumbai. The sushi was a beauty to look at. It felt criminal to dig into the beautiful and intricate creation that was soon to become my lunch. 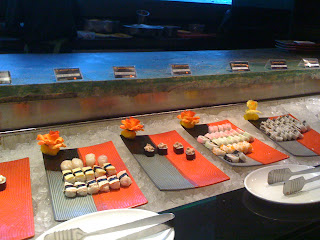 But wasabi was a real revelation - I mistook wasabi for a chutney and took a generous dollop but what followed was a nightmarish - my tongue, throat and belly burnt from the sharpness of the wasabi, my eyes watered as though I was weeping and scalp sweat as though I was in an oven. It took large glasses of chilled Coca-Cola  to literally chill it down.
But then once I was fine, I enjoyed my wasabi "responsibly" (as they say when they advertise liquor) with generous amounts of soya sauce and pickled ginger with thin slices of tuna, octopus and squid along with a wide variety of sushi! I was convinced that the Japanese are at the very apex of sophistication in food.
It's that wide spectrum from plain basic and unsophisticated to an extremely intricate work of art, from the obnoxious to the delicate - that makes food so enjoyable. One lifetime is not even enough to savor it all. (Have no doubts - indeed I am including the Icelandic delicacies here!)
That's I don't want Nirvana, I want to be reborn over and over again to partake great food, as it evolves!
Posted by Rajeev at 5:00 PM