This week took me to Surat, the diamond capital of India. I always had an image of Surat in my mind ever since I was a kid. The reason for that was simple - one of Papa's acquaintance, Chhaganbhai Patel, when high on his favourite whiskey, would endlessly blabber about his hometown, Surat, in a comical fashion.
But I wonder what Chhaganbhai will have in "dry" liquor free Surat? Masala chaas perhaps!
Surat is barely 260 kilometers from Mumbai. But getting train reservations for Surat is a task, thanks to IRCTC, where the hit rate for successful bookings would be in single digits.
So I had to book myself on SpiceJet SG 152, that departs Mumbai in the evening for Delhi passing by Surat, in what was to be my first flight on SpiceJet.
The best thing about these low cost carriers is their single minded doggedness about punctuality. We boarded on time. The aircraft which was a Boeing 737, registered as VT-SGC and christened "Fenugreek" took off 5 minutes before schedule - all SpiceJet aircraft are named after spices - Cardamom, Fenugreek, Oregano, etc.
The cabin looked shabby, unlike IndiGo's. My seat was untidy - the seat pocket was dirty. Probably cleaning the aircraft is low on priority! 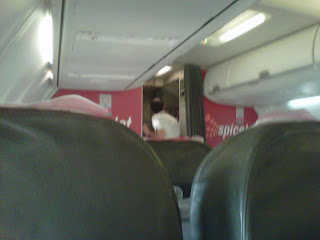 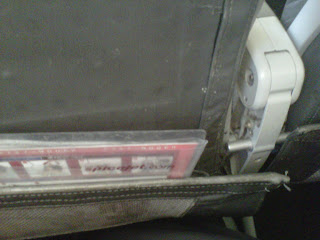 The crew were neither snooty as Jet Airways nor were they as friendly as IndiGo's. Their uniforms are a bit odd, probably they had engaged a low cost designer?
Quite unexpectedly, we were given a snack box, which had paneer tikka, vegetarian seekh kebab, tandoori aloo, balushahi and fresh sweet lime juice. That was nice. 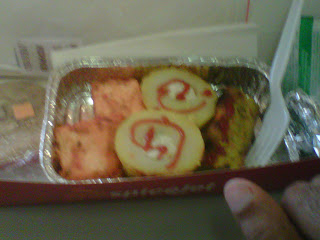 In about 30 minutes after take-off we began our descent. Surat city looked fantastic from the air - well planned, green open spaces and orderly traffic.
The landing was really bad. We landed with a couple of thumps and bangs and it seemed that the pilots weren't able to steer the aircraft along the centerline of the runway. Low cost pilots or pilots with fake licenses, I wonder?
We were to drive 40 kilometers out of the city along NH8. The drive through the city was pretty smooth. The city looked neat and tidy - I am told the city underwent a major cleanup operation after the outbreak of plague in 1994.
The roads were wide enough, and very smooth, well illuminated. The markets alongside the roads were  glitzy and bright, teeming with people. Eateries alongside the road seemed packed - I sometimes wonder how Gujjus have a great time without booze and chicken. Our driver spoke glowingly about the development in the state, the way economic upliftment has happened in the state under the Chief Minister, Mr. Modi. He called the development a wave that lifted everyone alongwith it.
Undoubtedly, the orderliness of Surat could put Mumbai to shame. It all goes on to show how an able administrator, like Mr Modi, can transform a state. But the point is are systems being created to ensure that the good practices are institutionalized. In India, if we have to progress, we have to create institutions that carry on the good work done so that when the able efficient public servants are voted out, the developmental work continues on unhindered. I am not sure whether that's happening in Gujarat, or even in progressive states like Bihar.
We settled into the guest house that night. The next morning before setting out for our meetings we had breakfast in the guest house itself. Man, I was horrified to see samosas being served for breakfast and nothing else - we were in Gujju land after all. On our special request we were served a few toasts which lasted us till lunch.
In the afternoon we set for Mumbai by road on NH 8. The highway was great and scenic - green with big hills showing up every few kilometers. This was my best road trip, in India!
Posted by Rajeev at 10:45 PM