Chorizos Or Five Centuries Of History?

A few months back I had written about how food travels. This post is about exactly that.
Recently, on my weekly rounds to Haiko, Powai, I was pleasantly surprised and rather overjoyed to see Goan sausages in stock.
Goan sausages or chorizos as they are called, are of Iberian origin, Portuguese, to be precise, and were brought to this part of the world by the Portuguese pirates in the 1500s when they assumed control over the sea-based spice trade routes.
The brutal colonisation of Angola, Mozambique, which was then known as the Portuguese East Africa and Goa (Estado da Índia as the Portuguese called the place) in the 1500s brought about a swift imposition of religion and alien customs in these lands. The natives had to comply or face brute firepower or torture. That explains why Konkani Brahmins adopted Christianity and took to eating pork, which was unusual for Indians then. 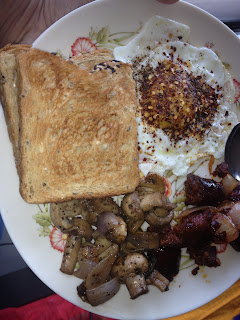 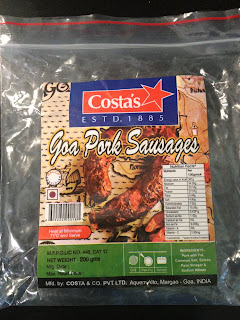 And the art of Goan Chorizo making (which has vinegar as a preservative) tells a tale of conquests, wars, explorers, a tale of travels of the barbaric pirates from the Iberian peninsula through Africa into India.
The Chorizo tells us how India has been a melting pot, a sponge that soaks in all influences, a story of how alien cuisines have been adapted by locals with Indian spices, something, that is uniquely "Indian" or "Goan" and that's how, today, it found its way into my plate.
(The Chorizo also travelled into Orient as well - the Portuguese posession of Macau too adapted the Chorizo in its unique way.)
Instead of having the traditional sausage-pao, I had a smorgasbord - sautéed Chorizo with onions, herbed mushrooms, fried egg and toast make for a hearty breakfast. That's a good piece of history on my plate!
Wonder what more secrets do other culinary delights hide?
Posted by Rajeev at 9:51 AM