In the mid of February, I had to return back to Tiruchirapally, or Trichy as it is usually called. And that happened to be Valentine's Day - the very thought of spending the day away from home and not having a cosy dinner with Neeti gave me the shudders, but I had to go.
I took an early morning Jet Airways flight from Mumbai to Chennai. At Mumbai airport, I met a neighbour, who too was on the same flight travelling to Chennai, we chatted up for a while as we boarded - the usual topics - the economy, business environment and related political issues. He was headed to Chennai for work and was to spend sometime there with his son as well.
The weather enroute was excellent, though the approach to Chennai was turbulent. Chennai had been experiencing heavy showers for a few days. We landed into a very misty Chennai at about 8.15AM- the clouds were thick, dark and pretty low.
When disembarkation started, I noticed another acquaintance - a former neighbour who was in the Business Class section. I caught up with him on the bus, that took us to the terminal building. He was headed to Colombo for work.
I had booked myself on SpiceJet for the onward journey to Trichy - a new flight which had recently been introduced which was scheduled to take off at 10.30 AM, and sould have made it into Trichy city by 12 noon, well in time for my meetings. I was excited about flying in SpiceJet's new Bombardier Aerospace Q400 NextGen turboprop, one of the 15 that they have recently acquired. It would be my first flight on a Q400.
I had an impression that these LCCs, SpiceJet included, were sticklers for punctuality. But my flight got delayed - from 10.30 to 11AM, and then to 11.30 and finally to 12.30 - an agonising 2 hours.
I killed time by having a couple of conference calls, completing some work and having a cup of coffee with a cookie. The worst about Chennai airport is that it resembles a railway station platform - small and crowded. While a new a terminal has been ready for over 4 months now, I am told it is not being opened because Amma, the Chief Minister does not have the time to preside over the inauguration. 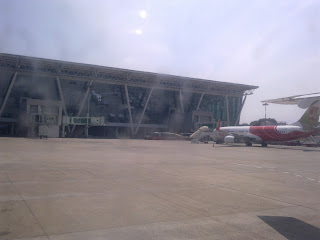 We finally boarded at about 12.15 PM, by then it was sunny. I thought I had very smartly chosen a seat near what I thought was the exit - at the rear (just like the ATR72's that Jet Airways flies), thinking I would exit first. I did not realise I had made a fool of myself - boarding on the Q400s happens from the front and not the rear.
The flight was full - families, couples and businessmen made up for the crowd on board. 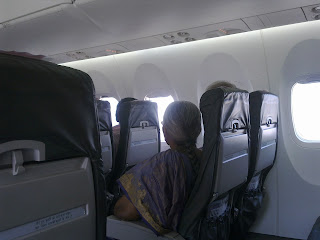 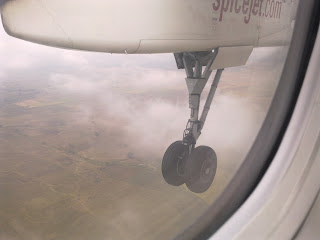 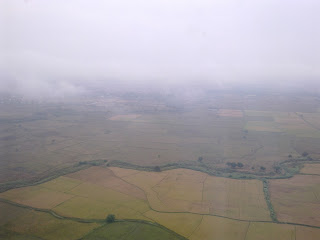 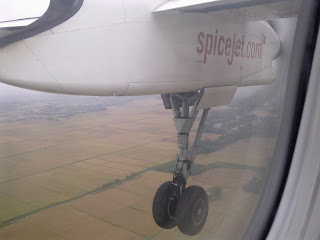 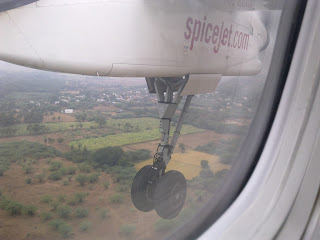 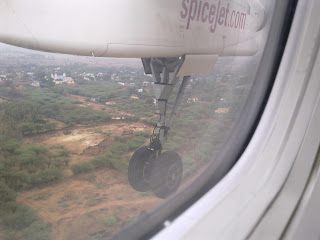 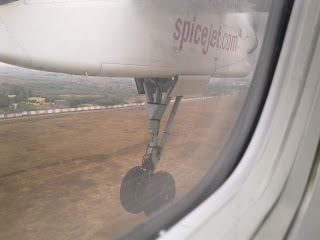 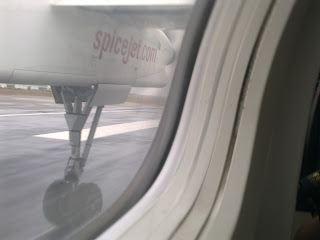 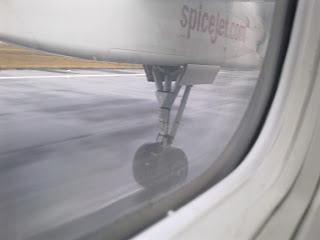 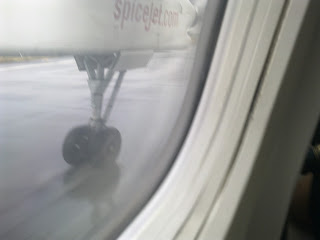 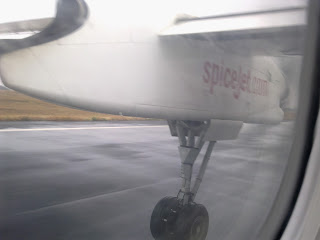 Again the flight to Trichy was quite bumpy. While the skies had cleared over Chennai, it was different here in Trichy.
We finally landed at nearly 2PM and I was pretty upset that we missed out on invaluable first half of the day, thanks to the inefficiency of SpiceJet. But the sight of the landing from the rear was amazing... the deployment of the landing gear, descent through the clouds, and the spray on the wet runway on touchdown - all these lovely sights compensated for the lost time.
I proceeded straight for the meeting, even though my tummy was noisily rumbling with a massive appetite. I was in Tam-land, the land of glorious food and yet I had to wait.
Finally at 6PM, we got a break of an hour. We stepped out to headed to Collector's Road. There is an interesting restaurant, Ezham Suvai (ஏழாம் சுவை), which translates into Seventh Taste, I wonder why(?). I am told that Ezham Suvai is run by Chef Senthil, a chef who practised his art in Chennai and Singapore and had returned home to set up this unique eatery in this upcoming town. 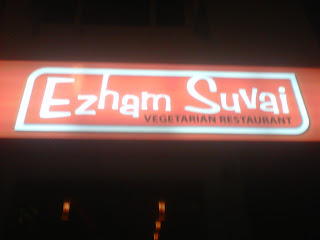 Ezham Suvai caters to the Trichy market - Tamils who are crazy about North Indian fare - naans, kulchas, chholey bhature, daal makhanis and what not. A bunch of precocious kids were enjoying all this stuff. But for me, it had to be pure local Tamil fare.
My colleague and I ordered rava masala dosa, kal dosa, parapu adai and bangala. The rava masala dosa was excellent - the crepe itself was extremely crisp and was quite spicy with crunchy bits of black pepper that had gone into its batter. This was, undoubtedly, the best rava dosa I ever had.
Kal dosa is traditionally done on a thick iron pan or kal chatti. Unlike the normal crispy version, this is the soft variety and does not need any oil. It is made from boiled rice, raw rice, urad dal, all of which is ground and fermented for 12 hours, before it's cooked. Before serving, its sprinkled with idli molagai podi, to give it a unique spiciness.
Next came parapu adai - an pancake similar to an uthapam made with moong dal and served with avial and chutney. Also with that, we we served with bangala - something like a pakora made with lentil batter, onions and coriander, served with an array of chutneys.
After we had all to this heart's delight, it was time for some filter coffee, which is a great way to end a Tamil meal!
We had all this great stuff for barely Rs. 300, wow, so cheap!
The service at Ezham Suvai was fast. We rushed back to our meeting to get there at 7PM. After another 30 minutes of deliberations, it was time to leave for Trichy Airport, to catch my flight back to Chennai. Thankfully, this time, the JetKonnect 9W 2790 flight was dot on time. And guess what - an ex-union minister and the son of a state politician on board, both of them lad in pure white. This illustrious ex-minister had spent a few months in Tihar Jail for his involvement in a scam of astronomical proportions. Some passengers rushed to touch his feet, while others glanced at him and smirked in disdain.
And soon I was looking forward to the next day in Chennai!
Posted by Rajeev at 8:45 PM