On the way back from Trichy, I spent a night at Chennai. The next morning, I had a yummy South Indian breakfast - fluffy white idlis, vadas, pongal, upma, a very spicy sambhar and an array of chutneys.
After a series of meetings during the day, I took an evening flight back into Mumbai. 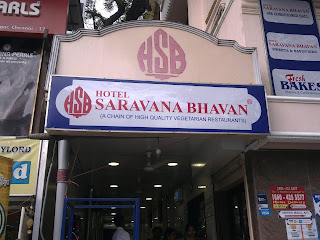 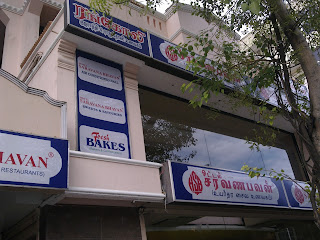 On the way to the airport, at about 5 PM, I stopped by at Sarvana Bhavan's outlet at Pondy Bazar. The outlet has two wings - an airconditioned wing and a non-airconditioned wing. There was quite a rush to get into the airconditioned section, with few tourists from abroad doing a recce of the stuff on the menu - naturally they would spend a lot of time choosing what would be acceptable on their spiciness scale.
Obviously it made sense for me to choose the non-airconditioned section, which was noisy and bustling with Tams. (I was the only non-Tamil there!)
Here the waiters meant business. Orders were served within 10 minutes and people quickly moved on. That suited me perfectly. 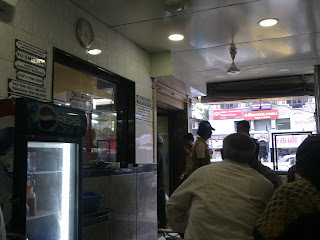 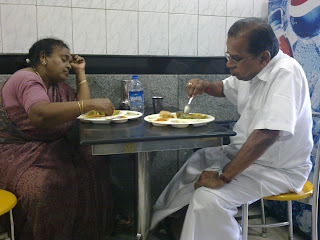 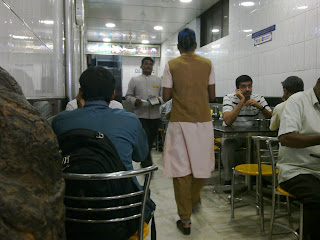 By that time, the aromas of chutneys and the spicy sambhar that were wafting around had put me in a state headiness. It had to be something good.
For me that something good was a crispy, hot rava masala dosa! That was followed by steaming filter kaapi (or filter coffee), in a traditional Madras-style Dabarah.
There is indeed something which is unique, which is intensely intoxicating, and enchantingly blissful about having a kaapi after a spicy South Indian meal! That bliss is unreplicable, except in the South! 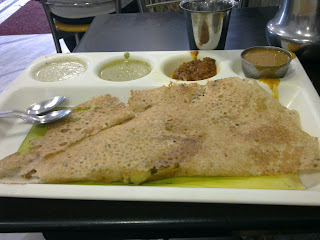 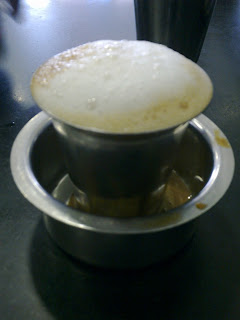 My next pit-stop on the way to Chennai airport was SriKrishna Sweets in a green leafy avenue in Pondy Bazaar, for something that we cannot do without - Mysore Pak!
Mysore Pak, a sweet heavenly delicacy which had evolved in the royal kitchens of the Mysore Palace has been branded as Mysurpa by SriKrishna Sweets and has been made into a marketing success, of which I am a living proof! 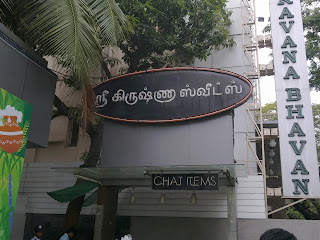 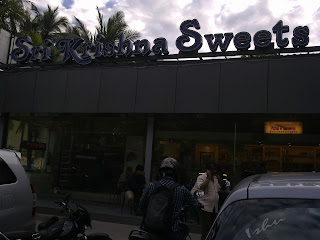 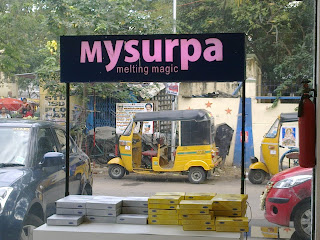 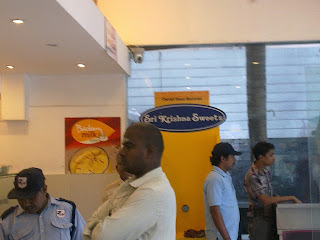 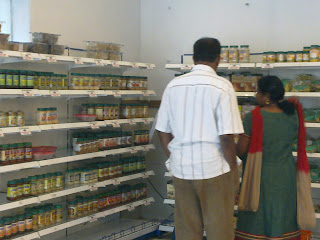 Besides Mysore Pak, SriKrishna had a range of savouries, spices, mixes and pickles, which I was indeed tempted to carry back with me. But a lot of this stuff isn't allowed in cabin baggage. So I let that pass. Two boxes of the "Melting Magic" were bought - one for ourselves, but the second was to go a few thousand kilometers to Beijing for my sister! (And I always say food travels!)
The weather in Chennai was awesome that evening. But I could have little of that as I was late for my flight to Mumbai.
After the airport, while I waited to board my flight there was a group of some twenty-odd boisterous Punjus, old and young - I could overhear the magical Punjabi they spoke - they were returning back to Delhi after attending a wedding in Chennai. One elderly couple had their fortieth wedding anniversary that day. That news was "leaked" by a precocious teenaged "henna-ed" girl to everyone in the group. And very soon the entire group erupted into a spontaneous celebration - all I could hear was "Badhai ho jee! Baut baut bhadhai hao! Pehle kyun ni dassya? Ae gall thik ni hai!"
For a moment I thought I was back home in the North. Reality struck when boarding for my flight to Mumbai was announced. That's when I realised how lonely we are in Mumbai without the extended family!
Posted by Rajeev at 10:54 AM