Earlier this week, I traveled to Hyderabad. Since the aircraft I was to take was parked on a remote bay at the international terminal, a long drive along the periphery of the airport was necessary.
I wasn't upset about this long drive.... I got to see a Lufthansa Cargo MD11 freighter taxiing from the cargo bays towards Runway 09-27. I was just imagining whether Felix Gottwald was on it - Felix is a Lufthansa Cargo first officer, an avid aviation photographer and has a blog dedicated to aviation - I have been following the journeys of Felix on his website for quite some time now! 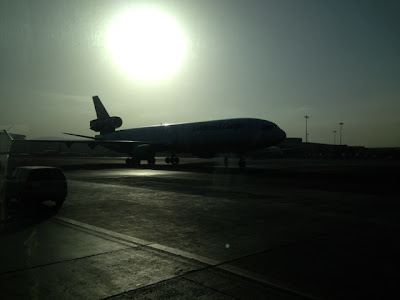 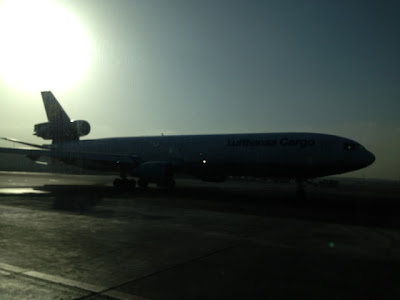 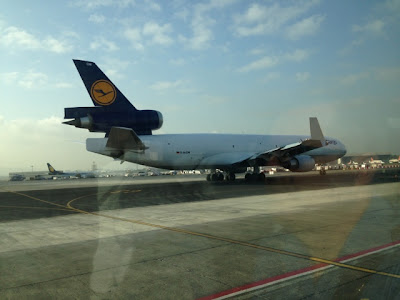 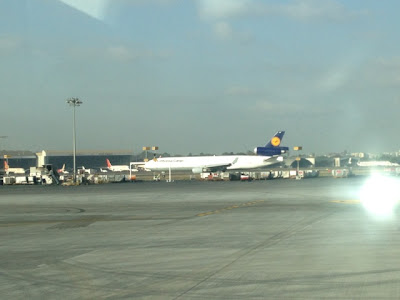 On the bus, I could not but help but take a lot of interest in eavesdropping on an animated conversation between a group of American executives, who were also traveling to Hyderabad. They were apparently executives from DuPont, all middle-aged, who had arrived in India a few days earlier and were headed to the DuPont Knowledge Center at Hyderabad for some conference or an offsite.
They were kind of surprised that this was quite long bus ride. One of them commented that this was as though they were driving to Hyderabad and they burst out in spirited guffaws. In the course of their conversations, a particularly slim middle-aged guy mentioned that he had done his masters in material sciences from Cornell University. A lady who was a part of the group exclaimed "I too am from Cornell, did mathematics there. Didn't realise you too were from Cornell!"
This prompted a third guy - a portly, bespectacled guy to say that he was from Carnegie Mellon University but his son was denied admission to Cornell despite having great credentials and an extremely good CGPA. He went on to say "Had I known you were from Cornell, I would have taken your recommendation!" Did I just hear that? Ha, recommendations work in America! I was surprised.
Now this portly guy was extremely proud of his son. He went on to say that his son was very tech savvy and wanted to join FBI as a counter-cyber terror agent! Now the rest of the gang got interested. There were long conversations on how cyber terror was a real threat, on how money can be siphoned off from banks in e-fraud, etc. This portly guy was obviously enjoying the "limelight" he was getting and went on to say, "Aha! My son is like the FBI guys in 2007's Die Hard movie! He uses his iPhone to do ethical hacking. Who could think of that?"
Then the conversation turned to India. Taj Mahal it was! The group "assessed" the cost of constructing a Taj Mahal today as USD 1.6 billion! One of them made an interesting parallel between the Taj Mahal and a 26-storey home that an Indian businessman had constructed for his wife in South Mumbai. One of them found it funny that this building had 5 storeys of parking space! One guy spoke about this businessman's networth, while jaws of the others dropped in surprise. "That's a lot more than I can ever believe exists!" said one of them
Now as were headed towards new Terminal 2 of Mumbai Airport which is under construction, they all kept staring out in amazement appreciating the aesthetic and architectural marvel that it is turning out to be! They conceded that they had never seen anything as magnificent back home!
That made me feel proud for India and for my city! Perhaps they would have liked the Hyderabad airport as well!
They lady realised I was listening to them and smiled at me. Now it was time to board!
Posted by Rajeev at 10:29 PM