Rediscovering The Joy of Reading

Just today there was an article in one of the dailies on the decline in the habit of reading. But nowadays, for me, books have become my routine, my recreation, my everything - an hour of peace and solitude before I call it a day.
Given my fascination for all things African, which is quite understandable as I spent an invaluable 11 years of my impressionable years in the equatorial and savanna belts of this great continent, I went on an Africa book-shopping spree on Flipkart.
The first book I picked up was The Rain Goddess, a fascinating account of the Rhodesian bush war that started way back in the 1960s after the Unilateral Declaration of Independence. Written by an officer in Rhodesian police force, Peter Stiff, the story covers the life of an ambitious young black Rhodesian, Kephas, who was studying to be a doctor, who had a pretty girlfriend.
But with a twist of fate, Kephas is indoctrinated and gets so intoxicated by power that it gets the better of him. He unleashes his fury of terror on village-folk with his AK-47, survives on bushmeat and  takes shelter in the veld, where the monotony of the landscape is interspersed with the kopjes that regally rise up above the landscape.
Perhaps, the loss of reason, unscrupulous guile and an infinite lust for power in brilliant youngsters like Kephas explains why the once prosperous Rhodesia has deteriorated into the pitiable state that Zimbabwe is in today. 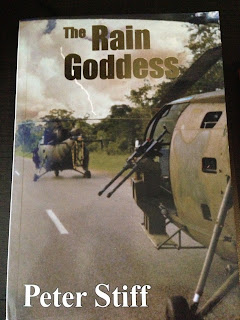 Sara Dunn's Appointment In Zambia is an exciting account of her journey, alongwith her husband, Ross, in the early 1970s from Edinburgh to Chingola in Zambia, in their brand new Hillman Hunter. They covered 20,000 kilometers in nearly 8 weeks, braving the Sahara, crossing the war-torn Biafra region, and transported their car across a tributary of the Congo River on a raft cobbled together with canoes. I could very well identify with their journey beyond the Sahara into equatorial Africa and Savanna grasslands. It was heartwarming to read about Sara and Ross' experiences in Kampala, my birthplace - a place they found extremely pleasant and pleasing! Their drive along the Rift Valley was refreshing - my family traveled on that route several times and we felt that way too - it was rejuvenating.
And then getting to Chingola in the Copperbelt was such a relief for  Sara and Ross - this area was so familiar, so much like home, once, for us! 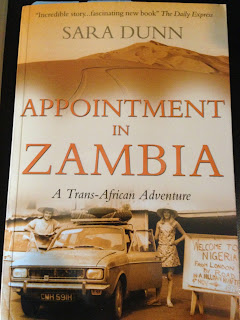 Another interesting book I read recently was Harnessing The Trade Winds. The book, written by Blanche Rocha D'Souza, gives a fascinating account of India's links with Africa, which date back to the Vedic Age. East African highlands (Mountains of the Moon) were called Chandra Giri, the White Nile was called Shvet Ganga and the Blue Nile, Neel Ganga! Gold from Sofala (today's Mozambique and Zimbabwe) fed ancient India's insatiable hunger for gold! 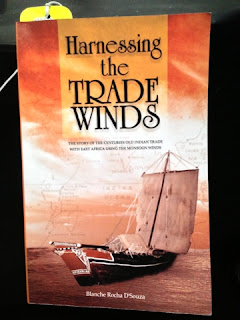 The book then goes on to describe how seafaring Kutchis and Gujaratis developed intricate trade relationships with the East African region, specifically Zanzibar in the medieval ages. Their ingenuity was  a boon - not only did they profit from trade  but also gained prominence in local administration. Their sea-faring skills were "exploited" by the marauding and pillaging Portuguese, under Vasco da Gama to "discover" the sea-route to India, something that our Gujarati bhais had known for centuries prior to the Europeans!
And then came in the English, who brought in indentured labour from India to build a railway link into Uganda in the 1800s. And the rest is history...
With three books on Africa done, I have headed "home" and am now reading Khushwant Singh's The Sikhs on another industrious and affable Indian community
Posted by Rajeev at 8:40 AM