Our Own Delightful Paella!

Last weekend, lazing around at home, we watched a show "From Spain With Love", on Fox Travel, a food and travel show hosted by Annie Sibonney. Annie, a Moroccan-French gourmand based out of Toronto, brings a inexplicable passion to her show that makes it so enjoyable.
The episode in question was that on the ubiquitous Spanish Paella. Rustic and delectable, Paella is a delight that exemplifies how food travels, how locals marry foreign traditions with the goodness of local and fresh produce.
Paella, the name comes from Patella - the Latin word for pan (uncannily, it sounds like the Indian Patilla!). Paella evolved in the Valencia region. Moorish influences brought rice to Spain - they used to cook rice alongwith meats and vegetables and a pot. The Spaniards adapted this technique as their very own to make Paella - something that has  now become ubiquitously Spanish.
Usually, Paella is made on a wood fire, in a wide open pan with meats sauteed with saffron giving the dish a delectable yellow-orangish hue. There go in vegetables, paprika, grated or pureed tomatoes. Finally, goes in Bomba rice - a visible symbol of Arab and Moorish influences in Spain. Then goes in a stock - the wide pan ensures that each grain of the Bomba takes in the richness and the goodness of the stock. Paella is usually cooked outdoors, the slow heat from the wood fire ensures even cooking and ensures retention of the rich meaty flavours.
Annie's show walked us through a variety of Paellas - rabbit, chicken, snail and seafood Paellas. That was a real revelation because the first I heard about Paella in 2008, it was of a basic version. Padma Lakshmi, who is better known as Salman Rushdie's ex-wife hosted a show of her travels through the world  - one episode covered Spain and had a few minutes devoted to the Paella.
We were so enthralled by the show's depiction of Paella that we made it at home, our own way for our New Year dinner, ushering in 2009. The star of that dinner was Paella alongwith other Spanish stuff - a chilled tomato Gazpacho and a baked pomfret casserole with vegetables cooked in white wine.
My attention was focused on the Paella - I picked up the widest kadai we had at home. In heated olive oil chicken pieces were fried with 4-5 strands of saffron. Once chicken turned golden, in went onions, deskinned tomatoes, which got pureed in the heat of the kadai. Then we added coarsely shopped bell peppers and capsicum. Then went in lightly soaked rice - we used coarse rice available, as I could not lay my hands on Bomba!
The rice began take on a saffron tinge from the chicken. A thick chicken stock was prepared and added to the pan. Once it started simmering, I added a few table spoons of white wine, jumbo prawns and calamari rings. In next few minutes, the rice turned fluffy - swollen with the goodness, the lovely flavours of the saffron and chicken.
That was New Year's dinner to remember - tomato gazpacho, pomfret casserole and a very delectable Paella, with white wine! 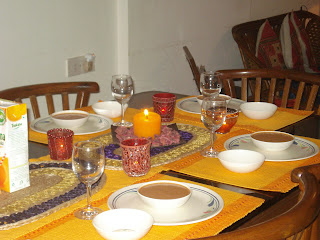 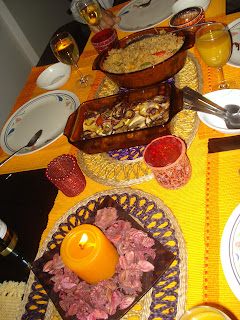 Neeti and my folks did say that Paella was much like our own biryani, Spanish biryani!
Now again I am watching another of Annie's journeys through Spain's Andalucia - this time she's covering gazpachos, sangrias, anchovies, artichokes withe green peas!
And I am also thing how good would a Paella be with coarsely chopped chorizo? Perhaps a chorizo paella would usher in 2013!
Man, I am hungry, again(!), for all things Spanish!
Posted by Rajeev at 11:11 PM