The Joy of Reading

After a long hiatus, I have rediscovered the joy of reading, all over again. First it was High Commissioner Madanjeet Singh's Culture Of The Sepulchre, which incidentally had been edited by my sister, Neelima. High Commissioner Singh chronicled his stint in the Pearl of Africa, Uganda, during the period of Idi Amin's dictatorship. It was such a pleasure to read the vivid descriptions of Uganda's natural beauty, which makes me so proud for I was born there. I completed reading the whole book in less than a day flat.
Neeti recently bought Ruchir Sharma's Breakout Nations which again I devoured literally line by line. Ruchir's incisive analysis of emerging markets through his journeys and experiences was again very readable and exciting. He is particularly appreciative of South Korea, an economy he terms as the "Germany of Asia". He prescribes a slower growth for China, which he says would be less disruptive and would lessen friction. His indictment of  crony capitalism and official corruption in India is particularly stinging. And there are question marks on natural resource driven growth in Brazil and Russia. 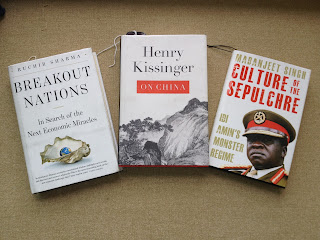 Now I am reading the venerable American diplomat, Henry Kissinger's On China - a gripping account of China's political and economic evolution over the last 400 or so years. He vividly account of the journey of China from unification under the Qing Dynasty in the 1600s to the very insulting intrusions by Western power, the Opium Wars and his seminal journeys into the post-Cultural Revolution Maoist Middle Kingdom in the 1970s that practically triggered the single most defining event of this age, the rise of China.
Kissinger's numerous anecdotes and recollections of early interactions reveal a single-minded objective that Chairman Mao Zedong and Premier Zhou En Lai had - a controlled, definite and robust rise to power, a painfully slow game of wei-qi ( 圍棋) played in statecraft. Wei-qi is a board game, played on a 19x19 board, based on the principles of encirclement and containment. Considered painfully slow in the West, but patiently played in the Orient, the game deals with global influence, interaction between distant stones, keeping the whole board in mind during local fights, and other issues that involve the overall game. Unbelievably, in wei-qi, it is possible to allow a tactical loss when it confers a strategic advantage.
Perhaps it were these wei-qi strategies laid out by Chairman Mao, Premier Zhou and Chairman Deng Xiaoping that prepared China for the long haul to pre-eminence on the world stage. Even though my political leanings are towards conservative capitalism, the book makes me doff my hat to those pioneering Chinese statesmen.
Reading On China makes my blood curdle that India never had leadership of that stature, excepting PV Narasimha Rao and Atal Behari Vajpayee, to steer the polity beyond tactical moves to defining long-term strategic moves. Prime Minister Rao's Machiavellianism and Prime Minister Vajpayee's vision worked wonders in those 12 years, which have defined the India that we know today. They are the true unsung heroes of India. Only if Prime Ministers Rao and Vajpayee stayed on a little longer.....
But today, we are "blessed" with underachievers.... sic! 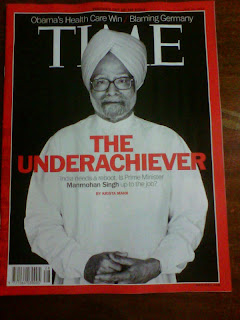 I am still reading on Kissinger's visits to Peking (now Beijing), I have to get back to read on what happened next, in the Deng regime. On China is as gripping as a spy thriller and simply unputdownable!
No matter how convenient an ebook on Kindle or an iPad is, there is a certain thrill in reading a physical book. I have rediscovered the joy of reading!
Posted by Rajeev at 6:52 AM