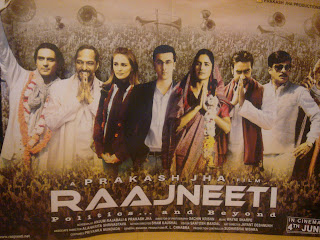 Neeti and I just got back from watching "our" movie last night, or perhaps early this morning.
Yes, Raajneeti was a much awaited movie for us, just because that's what both of us are called by our folks and pals.
The movie is eyeball riveting, astounding and gripping in every second that it was played.
The movie bares what goes on behind the spiel of our politicians, how we are manipulated or rather goaded into believing what suits our politicians.
All this, in the name of the supreme national interest, which is some kind of fantasy woven around a pack of lies.
And, we the gullible citizens of India fall for it at each stage.
At unexpected moments, some or the other character in the movie is bumped off. If you look back at Indian political history, you would also tend to suspect whether a few deaths were actually accidental or were they engineered.
Prakash Jha's painstaking research was actually paid off by his flawless depiction of intra-party politics and shadowy dealings of politicians. The sex and the sleaze in the movie makes you speculate about the number of skeletons (in thousands I'm sure) waiting to fall out of the cupboards of Indian politicians!
The casting was near perfect.
Nana Patekar, the real power centre, the "remote control", shapes the destiny of our characters skillfully with utmost finesse!
Manoj Bajpai is the quintessential underdog, who doesn't give up without a fight till the very end.
The icing on the cake was Ajay Devgan, who despite having few very dialogues to mouth, had an overpowering screen presence that said it all!
Katrina Kaif and Ranbir Kapoor, who despite having great potential as actors in their own right, were unsuited for the roles they played. They ended up looking more like eye-candy than anything else. In my view, Shahid Kapur would have been a bit better.
Undoubtedly, Katrina's character was modelled on Sonia Gandhi. That gait and accent was unmistakably similar.
The only flaw in the whole movie and Prakash Jha's direction was the (mis)casting of Nikhila Trikha as Bharti Rai. Perhaps someone more established would have made this character a lot more believable and powerful, at the most critical turning point of the storyline.
I felt someone like Vidya Balan would have breathed life into Bharti Rai's character. Interestingly, I feel that Vidya today is India's most under-rated actress with oodles of unrecognised potential and energy.
The end result, despite some flaws here and there, is brilliant.
Finally, we have someone who's created a work of art that stands up to the likes of 3 Idiots and Aamir Khan.
I would rate the movie at 5 on 5.
In all, it's an unmissable flick, depicting the Mahabharat of our times!
Posted by Rajeev at 11:53 AM