An impromptu movie outing, for Raavan, has driven my mind into a whirlpool tonight.
Undoubtedly, Raavan was a treat. 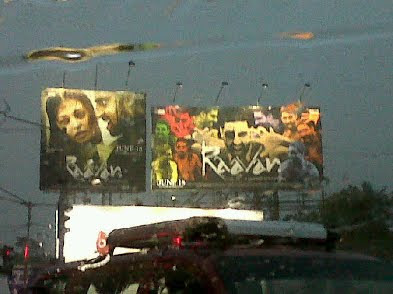 Though the mythical legend, Ramayana, was the inspiration for the film, it surely isn't an easy story to handle.
But Mani Ratnam weaved such a magic with his direction that it brought a certain degree of eager anticipation, despite the predictability in the story. Each scene of the movie was so meticulously shot in misty and idyllic locales that it convinced me that Raavan is indeed Mani Ratnam's labour of love.
I was quite surprised why the subtleties of the movie were ignored and critics came up all kinds of ratings from 1.5 out of 5 to 3.5 out of 5. Calling the movie a must-watch for National Geographic lovers was the unkindest cut of all. Do we still appreciate quality movies, afterall?
Abhishek Bachchan played the role of Beera (or Raavan) to perfection. Vikram looked very real as the no-nonsense cop. Aishwarya looked a bit unconvincing in her role as the captive. Perhaps she needs an Acting 101 lesson at the very earliest.
The movie made me think a lot about the legend Ramayan itself. Was Ravan all evil and no good? What is actually implied in the metaphor of the chopping off of Shurpanakha's nose?
Why did a great person like Ram question Sita's chastity?
All these are questions that will remain unanswered till eternity.
But without doubt, Ramayan represented a clash of civilisations - the one in the north which was an expansionist tribe while those south of the Vindhyas were jungle-dwellers, content with what the jungle provided. An expansionist intrusion into south by sages, presumably for cultural conversion, met with a resistance that probably culminated in the legendary conflict of the Ramayan.
But history is always written by the victors and never by the vanquished. The vanquished will always be written about as villains, while the victors will be painted as the good and upright, standing up for good for mankind.
In a perverse sense, the "unwritten" history about the vanquished will always be lost in the sands of time. And "history" as we know it, will be paeans in honour of the victors.
For this reason, "history", as we know it, will always be one-sided.
But certainly, the movie, Raavan, will be in history for the right reasons!
Posted by Rajeev at 11:24 PM